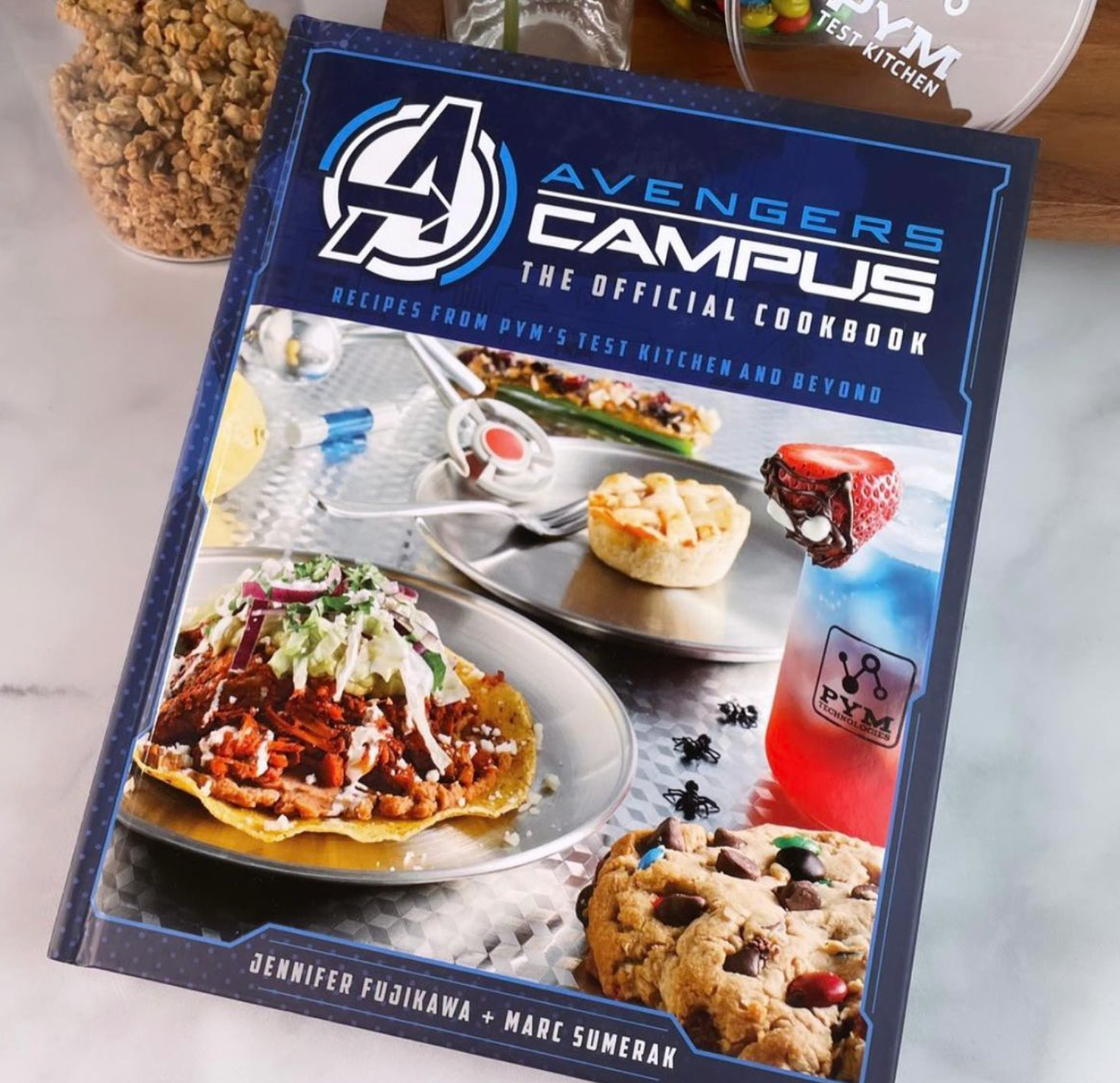 Avengers Campus: The Official Cookbook (Recipes from Pym’s Test Kitchen and Beyond) is an imaginative cookbook filled with affordable recipes that are delicious, down-to-earth, and doable. Written by Jenn Fujikawa and Marc Sumerak, the cookbook is creative and entertaining.

Jenn Fujikawa is the lifestyle author of Star Wars: The Life Day Cookbook (Official Holiday Recipes from a Galaxy Far, Far, Away), The Goldbergs Cookbook, and The I Love Lucy Cookbook: Classic Recipes Inspired by the Iconic TV Show. Co-writer Marc Sumerak has collaborated on the Star Wars holiday cookbook with Fujikawa and The Office: The Official Party Planning Guide to Planning Parties, Cooking With Deadpool, and he’s written for video games and comic books.

The Avengers Campus cookbook is told through the perspective of Cassie Lang (aka future Young Avenger Stinger), who starts off by telling how her father, Ant-Man, got his powers from Dr. Henry “Hank” Pym. Cassie is interested in solving world hunger and decided to experiment to see if Pym Particles could somehow be used to increase the size of food to feed more people. Cassie decides to use her idea to create an experiment. She asks Dr. Pym’s daughter Hope (the Wasp) and her research team to open up the Pym Test Kitchen to start experimenting with food particles to take “small actions on the plate that mean big impacts for a healthy planet.” Cassie spends her summer with Hope experimenting with food, and this cookbook represents the delicious fruit of their labor.

Galactic Greens: An eclectic blend of greens in a recipe shared by Taneleer Tivan, better known as the Collector, this salad is light, tasty, and unexpectedly filling. It’s all about the dressing. The combination of diced avocado, cilantro, dill, parsley, lemon juice, and other creamy ingredients make this salad sing.

Not So Little Chicken Sandwich: The level of this sandwich is difficult, and that’s because there are several homemade components to this recipe. The result is delicious. It’s not so little because it consists of slaw, teriyaki mayonnaise, sriracha mayonnaise, and a breaded fried chicken breast, all made from scratch. The instructions are clear, and even though the prep time is an hour and the cooking time is thirty minutes, the result is a mouth-watering delight.

Harley’s Loaded Tater Tots: Harley Keener is that kid who helped Tony Stark in Iron Man 3 when Tony broke into his garage seeking a little shelter from the cold and food. Well, he’s working with Cassie at the Worldwide Engineering Brigade, conceived by Tony. Your budget will love this recipe. Tater tots are an affordable treat you can find in any grocery store frozen food aisle. Add the elements of a loaded baked potato to the mix, and you’ve got a filling snack that will leave you with a definite smile.

Peach Pym Pies: Mini peach pies make my day. The pastry element of this recipe is one of the best I’ve used in a while. Using muffin tins to create tiny pies is sheer brilliance. This treat is sweet enough to accentuate the taste of the fresh peaches, and this recipe was one of my favorites from this cookbook.

New York’s Tastiest Shawarma and Impossible Victory Falafel Shawarma: Remember after the battle of New York when Earth’s Mightiest Heroes got a bite to eat at Tony’s favorite Shawarma joint? Shawarma Palace has opened up a little food cart near the Avengers Campus and shared its recipes for this cookbook. The flavors are out of this world. I never thought of using the impossible burger for a falafel before but guess what? It works! No need to go to the Big Apple for a bite to eat; just take a little time at home to prepare these delicious dishes.

Onome’s Outreach: Onome is one of Wakanda’s brightest minds sent to the Avengers Campus by King T’Challa and Shuri to teach. Not only is she sharing technology with the Worldwide Engineering Brigade, but she’s also shared this unique drink of coconut milk, berries, vanilla, and sugar. The recipe is not too difficult to make and tastes like a dream.

Avengers Campus: The Official Cookbook is an easy-to-use and imaginative cookbook perfect for Marvel fans of all ages. Reading through the pages and seeing all of the younger characters involved in the storylines, I wonder if this book is a preview for the introduction of the Young Avengers. Wouldn’t that be clever? Well, perhaps if you cook your way through this cookbook, you’ll discover some hidden clues. You’ll definitely love the recipes; you’ll be satisfied either way.

Avengers Campus: The Official Cookbook (Recipes from Pym’s Test Kitchen and Beyond) is available at bookstores and online booksellers.