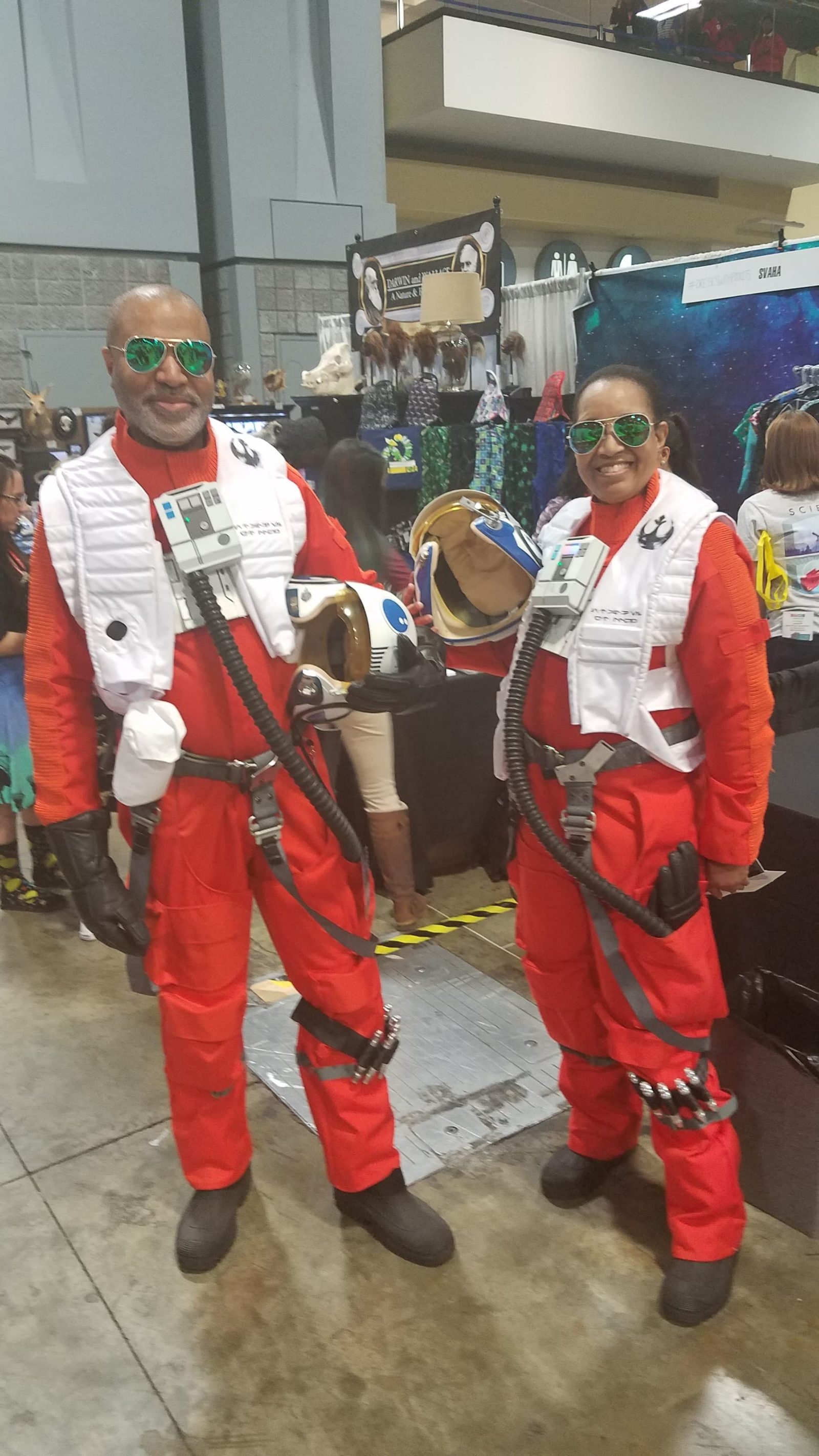 Every convention has its own identity, sometimes defined by the city, other conventions by the venue, some by the guests, and many by the name.  With a name like Awesomecon, figuring out the identity by the name seems a little like boasting.

It purports to be geek focused and I guess that is true, but Washington, DC style.  While a little light for those comic purists, Awesomecon is not focused on comics and that is okay given all that the con covers. Where San Diego and New York have large corporate sponsorships promoting their television and movies, one of the sub-cons is Future Con. A joint venture between the Smithsonian and the convention folks, there is a whole area, as well as, a conference room primarily dedicated to programming associated with science.

Given the current administration’s aversion to the scientific, the fact that this year the showing seemed even better than last year is intriguing. The National Aeronautics and Space Administration or NASA was in full effect. The whole area was like a science fair, minus the obligatory baking soda volcano’s but with a pretty interesting model of the universe. Of course, this one was viewed through a three-dimensional (3-D) headset, which made the whole experience worthwhile.  Several different rovers roamed the area, and there was an area that gave a sort of update of many of the different projects underway. Not to be outdone, the Central Intelligence Agency (CIA) had an impressive showing, which included take-home coloring sheets. As I am sure it was some kind of way to monitor my con goings on I avoided the tables as best I could! 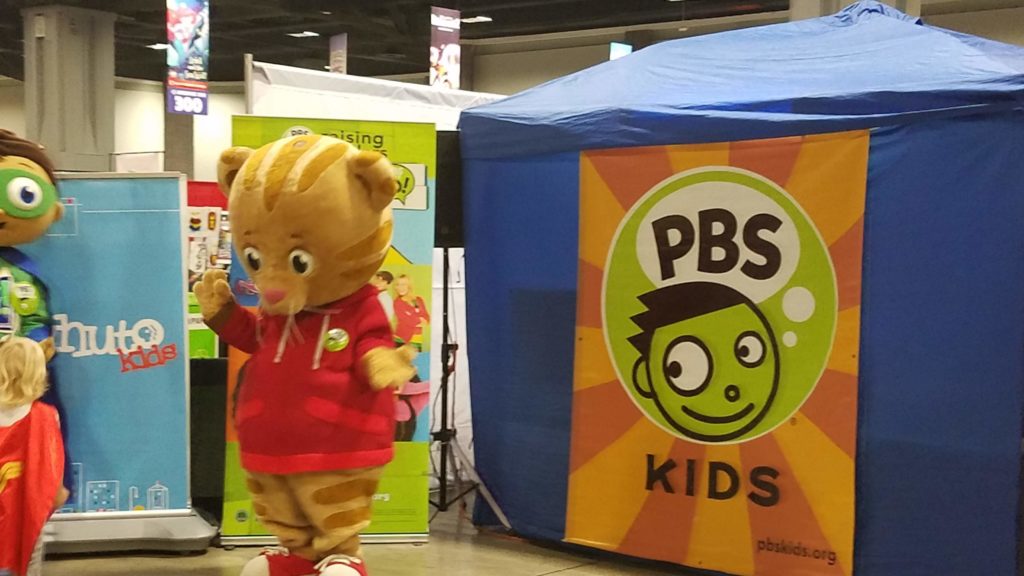 Less controversial on the exhibit floor were various vendors selling their wares including a cellular phone company, insurance folks, and the one booth I really should have gone back to the chiropractic spa booth as I walked five to six miles each day at the con.  While most cons have a kid’s day and or area, Awesomecon provides a kid-focused mini-con called Awesomecon Junior. This year the offerings for the kids was much more expansive, including photo opportunities with some PBS favorites, martial arts exhibitions, story times, and kid-focused gaming. 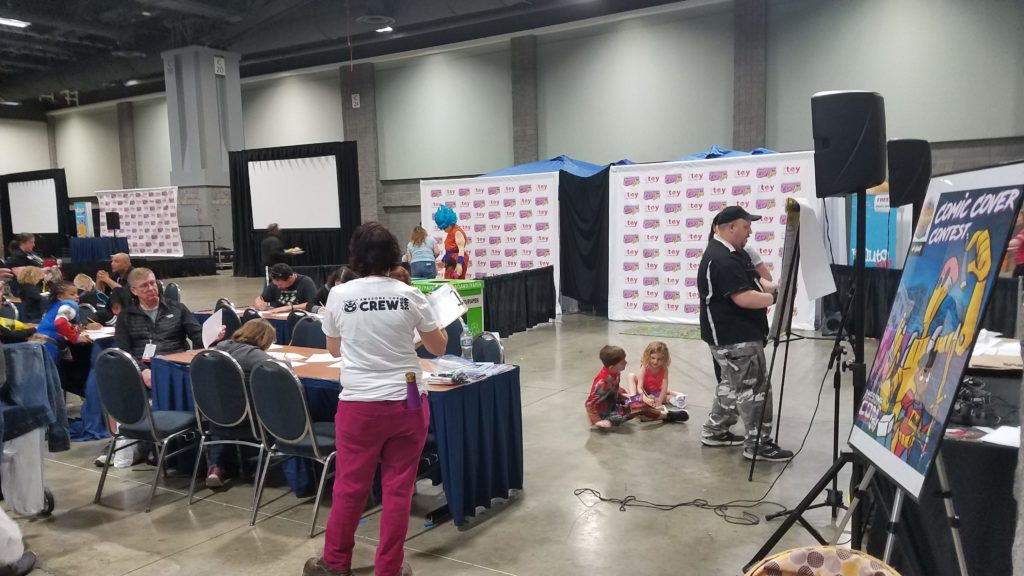 The aisles on that side of the Exhibition Floor seemed a little bigger as the strollers did not seem to block the walkway as much as in other areas. Pride Alley returned with several booths that catered to the LGBTQ community. I always like to stop by and get a handful of the personal pronoun cards, as I and others need reminders, as the plurals can get difficult for some of us.  There was also a conference room dedicated to LGBTQ related geek topics. The single track conference rooms can make attending panels in your area of interest a great deal easier.

The entertainment guest list felt like flashback Fridays, as the many members of the cast of 1980s and 90s shows were in attendance, including most of the bridge crew from Star Trek: The Next Generation, individuals from Weird Science, the original Karate Kid, Princess Bride, and some co-workers from the Office made appearances. But to be sure, the young-uns were well represented with some of the cast from Riverdale, The Punisher, Luke Cage, and The Flash present.

Of course with a good deal of the crew of Star Trek: The Next Generation present, the most common costume play (cosplay) was Star Trek related.  I would have thought that there would have been much more Captain Marvel related cosplay. But the cosplay was a little light anyway, so maybe that was the reason.  Naturally, there were some rather clever costumes and the not so clever costumes, as the barely clothed trying to enter cosplay as a profession enticed some of the “photographers” to take their pictures, but hey…there is something for everyone at Awesomecon.

Naturally, the cosplay was enhanced by the Old Line Garrison of the 501st Legion, who are Star Wars cosplayers that have various backdrops and cosplayers to support wonderful pictures.  The Old Garrison normally has a booth where you can exercise your Second Amendment Nerf gun skills by getting your Stormtrooper target practice on, with the proceeds going to a charity.  There was also lightsaber training and an opportunity to mug it up with an alien, like from the movie Aliens, not that creepy thing on the Butterfinger commercial. With both Star Trek and Star Wars well represented by geek needs were pretty well met. 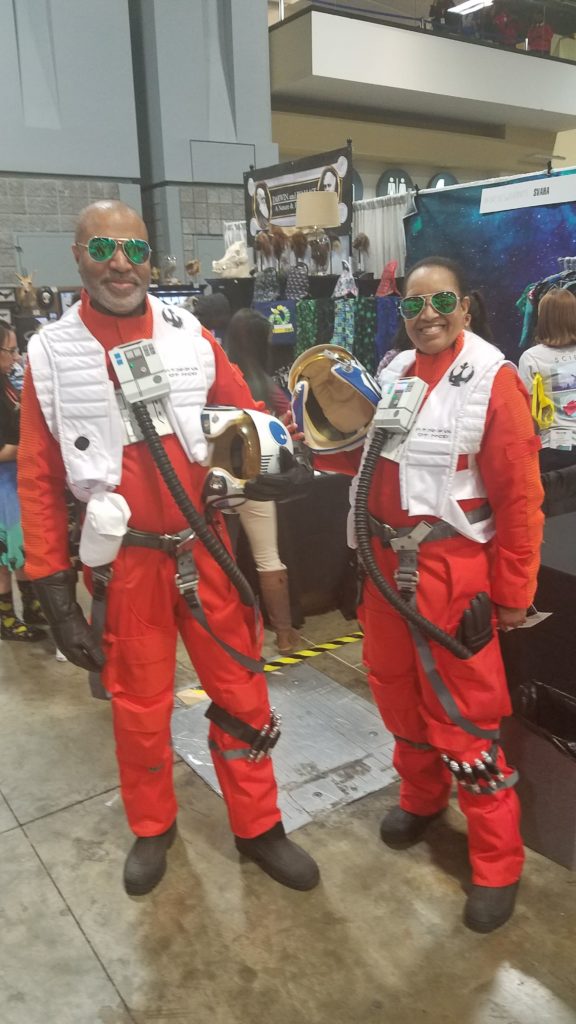 However, the con also included two gaming rooms, that served the board and video gaming community well.  The video game room included several tables dedicated to new games in various levels of readiness. Towards the back include some arcade related games from old, that you could now probably play on your cell phone, but we all know there is nothing like the banging of a joystick while playing Ms. Pacman.  The board game room allowed gamers to rent board games or there were tables where you could meet up with folks for a few games of Magic, before standing in line for one of the Main gallery events.

Since I mentioned it, one thing I tend to particularly enjoy is how well the con handles the inevitable waiting in line.  The long trek to the actual exhibit floor allows them to manage the lines quite well so typically the large jumble of folks volleying for a place in line is not normally present.  They rearranged some of the more popular comic guests’ tables to allow the lines to bleed over into the autograph and photo area, which supports not blocking the main thoroughfares like last year.  Of course, much of that planning was totally undone, by the placement of the con soda vendors at the front and back edges of the Exhibition Hall, as the dispensers were constantly down or spewing mostly foam causing long lines.

I would have wagered that there would have been a line out the door for the various beer taps that were present, but I don’t believe it was well advertised so many folks did not know they were there. 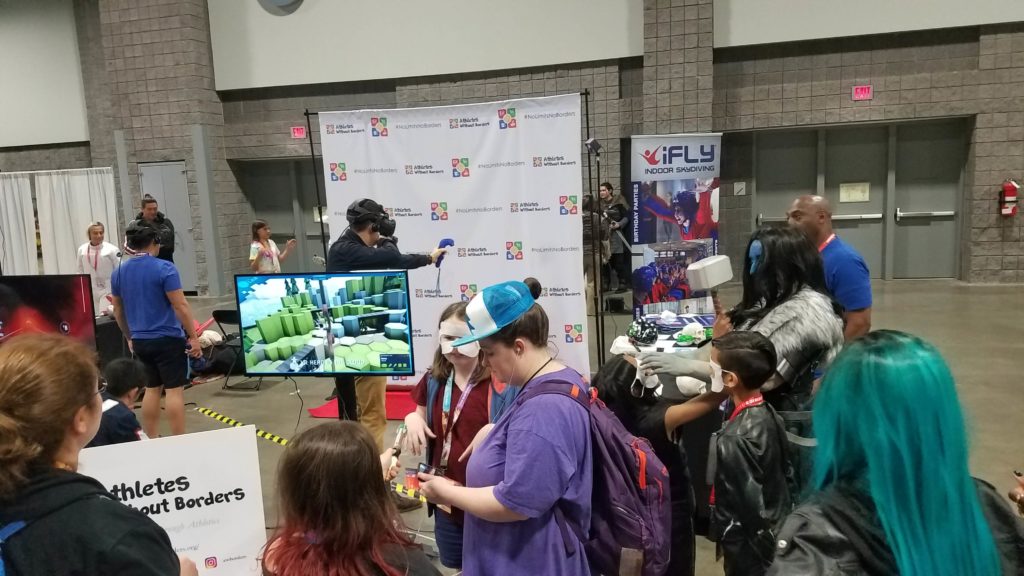 For any con, the Friday is often light and is what I recommend for those first-timers.  This year the attendance was incredibly light, which made me wonder whether the attendance would meet expectations.  Watching the constant, flow of attendees for about an hour on Saturday, eliminated any chance of that. It is posted somewhere that they get around 70,000 attendees.  It sure did feel that way on Saturday and Sunday, but not in the brainless, unwashed, fog of people that we all tolerate in New York, but in the fandom civility promoted by Awesomecon.   So for those of you who dabble in the geek, mark your calendars for Awesomecon next year, I’ll see you there!