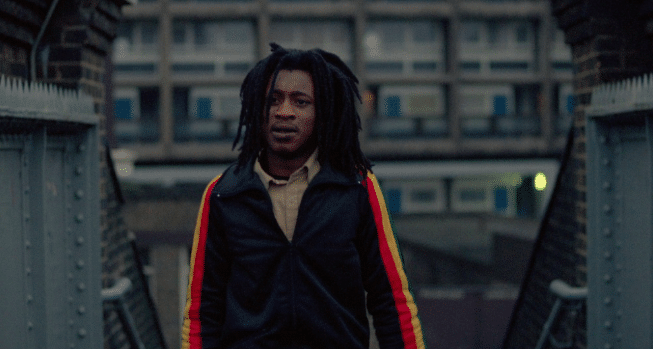 After Franco Rosso’s 1980 film Babylon about reggae, London, and racism first premiered at Cannes and Toronto International Film festival it was met with mountains of accolades.

Following the dancehall group Ital Lion, as they try to win a local song competition, Babylon is a realistic look at the extreme xenophobia and systemic violence Jamaican Brits suffered from during the Thatcher years in the UK. So realistic, in fact, that it was banned from the New York Film Festival because it was “too controversial, and likely to incite racial tension,” according to Vivien Goldman of Time Out magazine. Because of this superficial concern, Babylon was never theatrically released in the US. Now, 39 years later, Rosso’s outstanding opus is finally getting its moment to shine here. And it is just as relevant not only to British audiences in the wake of Brexit — but also to new American audiences thanks to a political administration that has been stoking white nationalism and racist violence.

Co-written by director Rosso and film legend Martin Stellman (Quadrophenia), and featuring moody cinematography by Chris Menges (who won an Academy Award, BAFTA, and National Society of Film Critics award for 1985’s The Killing Fields) Babylon is a masterpiece of social justice cinema from the ground up.

Blue (Brinsley Forde), is one of the frontmen of dancehall group Ital Lion. Handsome and charismatic, Blue code switches between his straight Brixton accent and Jamaican patois as the conditions serve him. At home and at work, he’s David, an assimilated Brit. With his bandmates and girlfriend, he’s Blue, the Jamaican legend of a DJ and lyricist. After showing up to his job as a mechanic late one day, Blue’s racist shit of a boss Alan (a cameo by The Princess Bride alum Mel Smith) fires him. But not before calling him a host of vile names that will make your blood boil. Seething with quiet rage and a simmering vulnerability, Blue throws himself into getting ready for the reggae competition and tells nobody about what happened. A typical reaction to this level of a racist verbal assault.

Unlike Blue, bandmate Beefy (Trevor Laird) makes no secret of his rage against the racism they face every day. He refuses to swallow his pain and works out compulsively in preparation for a battle he knows is coming any day now. Hence his nickname. 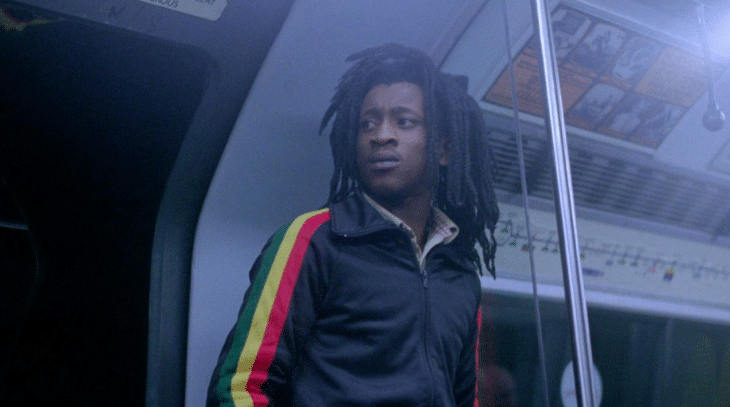 While Ital Lion is rehearsing in their rented storage shed space, they get verbally assaulted by a neighbor who reiterates the same racist dialogue we heard earlier from Blue’s former boss Alan. Ronnie (Karl Howman), the only white man who hangs out with the band and their community, tries to defuse the situation. After being called a traitor to his race, Beefy takes over from Ronnie and threatens the neighbor who threatens them all right back. “This was a lovely area before you lot came here!” she shouts. To which Beefy screams, “This place was never good!” A statement about race in England that functions on multiple social, cultural, and narrative levels. A statement that can also apply to how Blacks have been treated in the USA.

The only thing dated about Babylon is some of the clothing and hairstyles. This film could easily take place today in London, or in any urban setting in America for that matter, and you wouldn’t need to change a word of dialogue to update it. Just these past few years we have seen the extreme hatred contorting the faces of white people as they protest immigrants in the UK and the USA as white nationalism and straight-up Nazism has resurged like a social cancer. That same hatred crawls across the faces of the white folks in Babylon as they demonize and vilify this particular Jamaican immigrant community. This is a horrifying indictment of how far we haven’t come in the west on the topic of racial justice and equality. It’s no wonder (white) film gatekeepers didn’t want it released cinematically here in the US in the 1980s.

Babylon is about rising up against the oppressors. Deciding that we aren’t going to take this racist violence and abuse anymore. As Blue fiercely sings, “We can’t take no more of that! No! We can’t take no more of that!” A rallying cry to his brethren to hold firm and stand strong even as they are beaten back by police and white brutality. In America, by the 1980s the Black Panther movement had been actively quashed by government forces to the point where it was rendered almost toothless by the time Babylon was released. Had it come out in the USA, Babylon would indeed have had the power to re-start those civil rights fires if Blacks had the opportunity to see it. This is a terrible example set by a film festival, serving as an effective censor of social justice commentary and cultural growth in the USA. It’s also an unconscionable use of a film critic’s power that deserves an entire essay of its own to unpack these problematic levels.

Through Babylon, we also see the vicious cycles of violence that this kind of racial hatred and racially motivated assaults provoke as the dynamic ping pongs back and forth between the white majority and the Jamaican immigrant minority. It also put into stark relief Liam Neeson’s recent comments about his racist revenge murder fantasy to scapegoat any Black man he saw after a friend of his was raped. In Babylon Blue is chased down and beaten by cops for the crime of walking home while Black and immigrant. From that grotesque incident, the downward spiral trajectory of the film is hard and fast. And heartbreaking.

But Babylon is not only about calling out and fighting back against the racist and oppressive powers that be. Its beauty is in how it shows all these different Black folks existing in their spaces. Family tension, relationship difficulties, work stress, and their daily lives as they walk, bus, and Tube the city going about their various business. Babylon is about music as art, music as an escape, dancing as a community, and the ways minority communities find to survive in a foreign land that is completely hostile.

Featuring an incredible score by Dennis Bovell, and music from Aswad, the real-life band of Brinsley Ford, Babylon is an intimate and timeless portrait of a Black community trying to build a place in the only home they have now. Powerful and shocking, Babylon is possibly one of the most important films you’ll see this year.