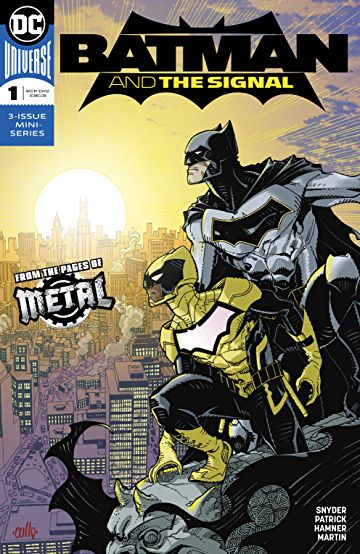 I’ve been a Scott Snyder Fangirl for a really long time. It probably doesn’t make me the most objective of reviewers when it comes to his work, but I stand by my flailing for him. I’ve met him at cons and heard him speak at several events, and I’m always impressed with his thoughtfulness about his craft and the fans that consume it.

But when I first heard of Duke and read his story in All Star Batman Volume 1, I’ll confess I was a little nervous. I’ve gotten my hopes up a lot about diverse characters only to be disappointed, and I kept thinking how is Scott going to navigate the tricky minefield of writing a diverse character?

Here is a quote from my Goodreads review:

“Snyder avoided the typical pitfalls in his (Duke’s) origin story that other writers fall into. No gang violence or drug references. No absent/criminal father, just a good kid from a good family that gets changed by the Joker”

This first issue of Batman and The Signal, keeps everything I loved about Duke’s All Star  appearances with a few additions. Most notable is author Tony Patrick. Scott and Tony share story credit on this book. It’s a collaboration that works on so many levels, mostly in the fact that there is an authenticity to Duke’s voice due to the input of a writer of color.

In this issue, we see portions of Duke’s life falling into place. He is living with his cousin Jay, his legal guardian while his parents are still being treated for the Joker virus, and is investigating the emergence of powers developing in various teens.

Duke also participates in a “family” meeting where he tries to carve a place as the day shift in a very tight group that doesn’t really know how to process his bright costume and biological powers.

He also gets in a fight with null, a new threat that seems to think Duke and their powers are somehow connected.

The story culminates with Duke meeting with Bruce and a conversation that sets the tone for what makes Duke unique and more importantly what he has to offer Gotham and the Bat Family.

I love that this story emphasizes what Duke brings to the Family. It’s not a handout but rather a true partnership.

This story has great pacing and fantastic art. There is enough of a dive into Duke’s past to make this a new reader friendly series, so even if you haven’t kept up with the Batman stories recently, you should be able to catch up pretty easily. So excited for the rest of this series!