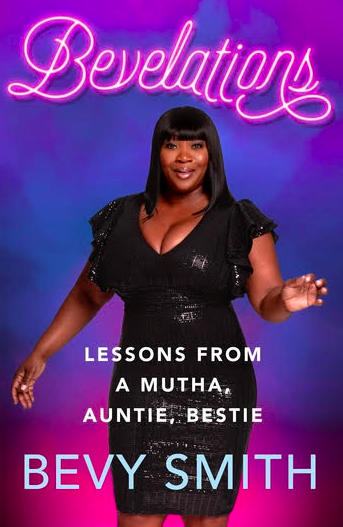 Written by: Pella the Pilgrim

You may know Bevy Smith as an American TV personality (she has been the co-host of Page Six TV and Bravo’s Fashion Queens), but in her new book, Bevelations: Lessons from a Mutha, Auntie, Bestie, we get to know about her origins.  I was only passingly familiar with Bevy Smith; I’d seen her on TV over the years and recognized the name but now… now she is an Auntie in my head. I know there’s been previous controversy of calling successful Black women “Aunties” when you don’t actually know them, but Bevy said if you are under 35 it’s cool.

A personal ethos of mine is “Live a life worth living.”  By reading Bevy’s first memoir (it won’t be her last…more on that later), I have come to think she shares this sentiment.

The first chapter opens with her deciding to make a career change to go find her purpose at 38. She left a prestigious job as luxury fashion ad sales exec for Rolling Stone and Vibe magazines. She had reached a level that many people (read: I) aspire to. She’d found success relatively early in her career, and she was going to walk away to find her purpose.

By all accounts, Bevy was living the life. She was jet-setting, rubbing elbows with the who’s-who, splurging on corporate expense accounts, and yet she wasn’t satisfied. She left a life of comfort and certainty to take a chance at fulfilling her dream.

In the book, Bevy recounts some of the moments of impact, moments of inspiration, humility, and perseverance. She gives us enough stories to make us informed, yet few details leave us wanting more. She knows she’s teasing us. She even admits that she’s holding out for the tell-all she’ll write when she’s in her nineties. I can’t wait for her to spill the tea. Will she tell us who that record exec was that she ran into when her day job and nightlife intersected? What did Lil Brown Bev and Tupac discuss? Who was the LA rapper on New Year’s?!

Bevelations: Lessons from a Mutha, Auntie, Bestie is a recounting of her journey. Bevy never advocates for us to take her path per se, but if you need encouragement to take that leap, I think that this is worth a read. Bevy Smith comes to us as Mutha (less Mother Goose and more FX’s Pose HBIC), Auntie, and Bestie (if you are over 35, she’s your cool friend).

First of all, I don’t know why this is calling me out by name, and why it’s so loud?! If I didn’t know any better, I’d think this book just tried to fight me.  That being said, Bevy writes in a way that is engaging as well as entertaining.

I hate re-inventing the wheel. Why do I have to do all of this work when I know that in all of iterations of this thing called life, there is somebody who has done what I want to do? I love it when these people make themselves known and also share their journey—especially if they and I are of the same demographics. There is absolutely no need for both of us to be on this struggle bus.

Bevelations: Lessons from a Mutha, Auntie, Bestie isn’t a step by step on how to be successful. It’s Bevy Smith sharing important parts of her journey as she sees it. The influence of her parents, her pre-gentrification Harlem upbringing, and her “framily.” As with any advice, “Take the meat and leave the bone.” There are a lot of situations that are unique to Bevy’s past (being able to live a double life as career woman by day and VIP darling by night — unheard of in these days of social media prominence). There are other situations that transcend (like being told that you can’t do something because they think you are too big, dark, or “much”) or daring to dream.

Timing is everything. At the top of the year many of us find ourselves re-evaluating our priorities. Some of us may be still reeling from the life-disrupting year that was 2020. We got to see where we truly ranked on these companies’ lists of priorities. Bevy was 38 when she made the leap to completely change her life. Funny thing is, she’d made up her mind five years prior to do it, but it took a beat before she took the leap.

In this book, Bevy Smith evolves several times. The growth isn’t always comfortable, but no one said it’s supposed to be.

This book would benefit someone who is contemplating a change, those with entrepreneurial aspirations, or those who simply want to be entertained. Reading the book felt like having a Kiki with your Cool Auntie because you are finally old enough to hear “grown folks business.”

I really liked the duality of Bevy’s life.  Many of us can identify with having to adopt personas to navigate a world where everyone has a box or lane for us. Behind the glamorous fashion ad executive Bev Smith, the hidden persona of the night club hopping Big Bev from Uptown was Lil Brown Bev who would skip school to go to the library. For those of us whom dare to create our own paths, it’s reaffirming to have a high achiever claim her greatest asset to be Lil Brown Bev, her inner nerdy Black girl.