Forest Whitaker, who appears in Marvel Studios’ Black Panther as Zuri, advisor to King T’Challa, could be rightfully called royalty himself. Hollywood royalty, that is. One of only four Black men to have won an Oscar for Best Actor (for his role as dictator Idi Amin in The Last King of Scotland), he has also won a Golden Globe, an Emmy, and a BAFTA award, in addition to over 50 other awards and numerous nominations. From creating iconic roles in films such as Bird, The Color of Money, Platoon, The Crying Game, and Arrival, to directing the classic Waiting to Exhale, Mr. Whitaker’s talent, power, and influence on the industry is undeniable.

He is also someone who is indirectly responsible for Black Panther being what it is. He helped develop, and also produce, director Ryan Coogler’s first feature film, the powerful Fruitvale Station. It seems fitting that he should now be directed by the director he “discovered.” Considering Zuri’s role as advisor and counselor to T’Challa, the mentorship role parallels to real life are noteworthy.

I sat down with him a day after the Black Panther premiere in Hollywood, to speak about his role as advisor, both on and off the screen, to the younger actors and director of the film.

Forest Whitaker: No, there’s nothing to be nervous about me. I’m probably more nervous than you are, you know?

DaVette: I doubt that, but thank you.

Forest: I’m always nervous, thinking “What did I say?” “How can I answer it correctly?” “What did they want?”

DaVette: You’re a producer, filmmaker, you know, one of the elder statesmen on the film. You and Angela (Bassett), and then John Kani. Did you have any insight you were able to impart? Did they ask you for advice, the younger actors or Ryan, who I know you’ve worked with before?

Forest: The way that I try to offer opportunities, when I’m acting, to other actors, is by the way I conduct myself, and the way I work ­on my work. When you do that, everything shifts—everyone’s behavior, even, shifts around that. A lot of young actors, you know, tell me that, or talk to me about that. Like the last couple of movies I was doing, both young male leads spoke to me about it. I didn’t have a sit-down conversation about it, but it was the way it worked and they made a decision: if I’m going to be in character, they’re going to be in character, and we’re going to do certain things, and certain things just started to happen like that.

Ryan was different, I mean it started with Fruitvale Station, and before when he was in school and then started to direct­ that. We had a number of different conversations. So I don’t want to take credit for him, but I definitely worked with him, and we did have conversations and worked on the script and talked about the editing and stuff like that.

DaVette: Yeah, I imagine there’s a lot of exchange of energy and ideas.

Forest: Yeah, a lot of discussions and talks. I didn’t with Black Panther. He hired me as an actor and he called me and [asked if I] would be interested in doing it. And I was really excited, because I believe in him so strongly, and I knew that it would be something special…and it is. 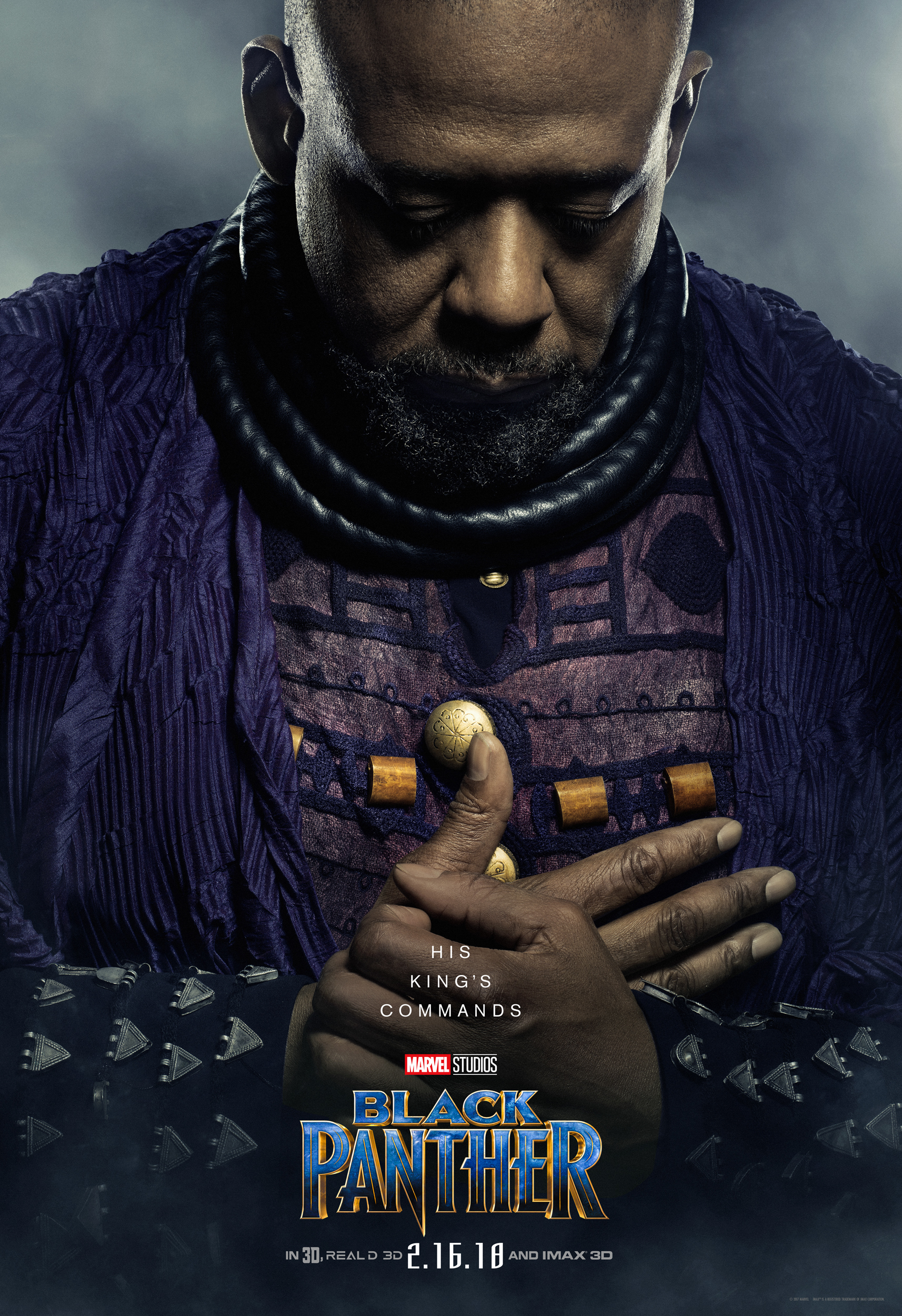 DaVette: Now, we need to talk a little bit about your character. Zuri was, in the comics, an advisor and close confidante to T’Chaka, and also in the film, and yet it was almost as if the role didn’t transfer to T’Challa. So, you were in an advisory capacity to T’Challa, but that bond wasn’t necessarily there with T’Challa.

Forest: I think, with T’Chaka, he was not only his close friend, but he was his royal advisor. I think with T’Challa, he becomes his mentor, and guides him to certain things, but then, ultimately, there is the secret that he holds away from him. He doesn’t think it will help him. And ultimately, the secret is discovered. We don’t see it pull a rift between the two of us, though.

DaVette: Yeah, and I was wondering what that, because I felt like he almost had—

Forest: He seems to blame his father more.

DaVette: Yeah, and I was thinking it was like, “This is for your own good.” So, it’s almost like, coming from a position of seniority, making that decision even though [T’Challa] is the next king.

DaVette: So, how much of a fan of the Black Panther comics, or Marvel comics, or comics in general were you, before you took on the role? Did you read them? Were you kind of a nerd?

Forest: I had read some of them, you know, when I was younger. At different times, I’ll see them on the stand or something and I’ll read one, you know. I can’t say I was an aficionado or anything like that, but I definitely was really aware of this character. And I was even aware that he was going to be put in films before. Like, I remember Wesley Snipes was trying to get it done. I think there was another person who was trying to get it done, too, but—

Forest: Yeah, years ago. Maybe a decade ago.

Forest: So, you know, I was excited about that.

Let me go back just quickly to the mentoring part, [the] philosophy behind it. Because I work a lot with youth, you know, in conflict areas, I’m always working to listen to their found… to their own individual knowledge. There is an acknowledgement of somebody having knowledge that they may be trying to translate, that they already have. I think I try to nurture that space, that they would be able to learn new things, as I would continue to learn, but it’s a partnership of, understanding that we continue to grow into—even if I may be guiding [them] towards a direction, there’s a recognition and acknowledgement [that] there’s already learned knowledge, [that even] a young 20-something-year-old person [has] decades of experience that they’re trying to translate into this statement.

So, it’s really a respect for that space that I have when I’m working with somebody. And I do it a lot, I do it with hundreds of kids we train in different countries. I’ve produced many, many films with first-time filmmakers, and so I guess it throws me when someone says “mentor.” I think it’s really nice, but it just throws me, because I think of myself as a partner, [and I] see where they’re pointed, see the obstructions that might be in the way, and [try] to understand what they’re trying to do, so that I may be able to be there as an aide, as a partner. That’s the way I see it.

DaVette: That’s kind of an interesting parallel, actually, to your role in the film, and your relationship with T’Challa and the younger members of the ruling family.

DaVette: Do you think that your presence on the set ever kind of gave Ryan pause when he was directing? Did you ever see him go, “Does that look good to you?” I mean, we talked about how it was kind of a cooperative feeling but did you ever get the feeling you were cramping his style?”

Forest: I didn’t [laughs]. I heard him say something about it. But I didn’t, you know? I felt, like, he was right on point, and he really knew what he was doing. He was caught in the emotion and it was a big scene.

The first scene I did with him was at the Warrior Falls, where there’s the big battle for the throne, so he would have to be clear on his focus in a scene of that magnitude. So, yeah. [He’d] gone over it a million times—knowing Ryan—a million times in his mind to come to that moment.

DaVette: Okay, just really quick. You started out as a singer.

DaVette: Do you still sing?

Forest: I don’t. I actually sang, you know, because I’ve been working on Empire, and so I sang twice on Empire now. Once to try to remind Lucius about the music we used to know, and another time I was just enjoying him and Cookie. But, yeah, that’s the only time I’ve sang again.

NOTE: The above interview was edited for clarity.