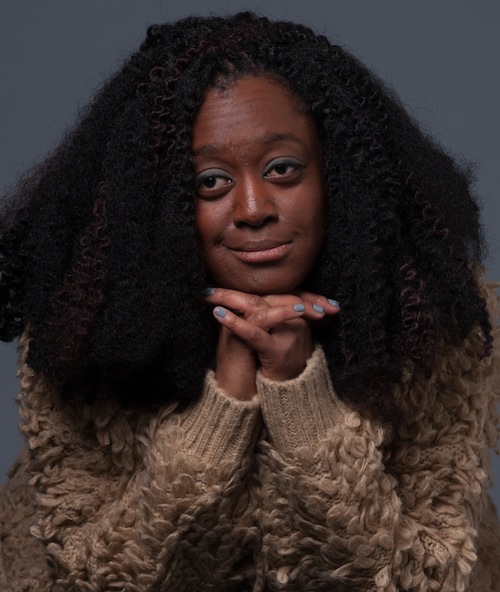 We’ve burdened darkness with all our fears. We blame it when we see evil. We call on love, light, and all the forces of good to protect us from it. Our goal is to eliminate it, to rid ourselves and our world of it. But in Daaimah Mubashshir’s new play, The Immeasurable Want of Light, we experience darkness for what it is: a natural part of the life cycle, the womb, the cocoon, the expansive, vital space for creation. Mubashshir’s work, itself, arose out of the vitality of blackness. In 2016, she began a daily writing practice, responding to Chris Ofili’s Afro Muses series. For Mubashshir, the figurative portraits (Ofili’s responses to memories, historical events, and everyday encounters) presented blackness as an “idea palette”; it liberated her to make work without concerns for industry expectations. Out of her daily practice (Everyday Afroplay, she called it) came Immeasurable, a work of theater, poetry, and visual art.

Capaurisces is where we find ourselves; the imagined galaxy is a mash-up between Dragonfly 44 (the galaxy almost completely made up of dark matter) and an artist colony in New Hampshire. It’s “the Milky Way’s darker twin,” Ella Fitzgerald tells us. Yes, Ella Fitzgerald. She’s something of a tour guide and when we meet her, she’s taking Nell Painter, Hilton Als, and Fred Moten on a tour. (They’ve gone there to “get away”). From her stained-glass Escalade, Ella points out DragonFly Pond (the best spot for skinny-dipping is also where stars arise out of dark matter), the galaxy guestbook, the library, and the church, Ofili’s Chapel.

In Capaurisces, Black art and Black scholarship can be a sanctuary, but not always. When a 20-something-year-old woman refutes her 7-year-old walking mate’s claims about the Black River of Joy, she tells him that there are books that counter the ones he’s read. There are thinkers who’ve done the work to say consider this less optimistic view. But the woman doesn’t mean to discourage him, she just knows from about 20 years of living. She’s been on the journey before, in search of protection from Lake White Supreme: “Now, I just know where the / roads turn / which berries not to eat / and sometimes I can keep from getting lost / Either way / I just keep walking.”

From what’s ahead of us in the future, to present possibilities of stillness (when characters refuse to perform), Immeasurable considers blackness across the spectrum of time. History shows up most evidently with Maker, the protagonist of this episodic play. In the opening scene, she gives us a figure, the weight of mass she carries to be visible to us. It’s a growing number, it “has/accrued at an interest/rate of 4.5 percent and will continue to grow.” She explains how it happened: “I signed up for this / I sought an escape from / serving other people food.” The scene continues, shifting imagery between contemporary modes of Black survival and what we know historically about Black women’s labor and servitude in the U.S.; but it also calls into the sanctuary: “I chose to carry this weight / To emit no light / To be instead / Gravitational / And Black / And heavy / Looking more like / Octavia Butler / Or Audre Lorde.”

The way that theater relies on voice makes poetry a useful resource for Immeasurable. At the outset, the narrator calls our attention to how this play experiments with form through a quote from Suzan-Lori Parks: “as I write along, the container dictates what sort of substance will fill it and at the same time the substance is dictating the size and shape of the container.” A set of instructions tells us that line breaks are used in place of punctuation marks. But as in free verse, there is no commitment to rules. When Leroy (Maker’s father) enters, his unbroken lines work with the advice he’s offering her to evoke reassurance. It’s the most pleasant experience we have of voice throughout the play.

Mubashshir, who’s said that she doesn’t like making depressing work, relieves Immeasurable’s readers with humor. Fred Moten, who we know to speak with a serious, even tone in this realm, isn’t above fangirling Ella Fitzgerald. And Hilton Als, though mostly cranky, is the one to recommend some tension might be released between two other characters if they just go ahead and have sex, “bump tacos,” he says or “get those juices flowing,” as Moten adds.  It’s this kind of relief that affirms this play as attentive work for Black people. Immeasurable is neither foolishly optimistic nor pessimistic; it is realist without being defeatist. It is speculative while being grounded. The Immeasurable Want of Light is rigorous and expansive, diasporic even in its consideration of blackness. In approaching blackness as an idea palette, Mubashshir has given us a multitude of opportunities to do the same.

Nina is a reader, writer, and cultural worker. She lives in Chicago, IL.