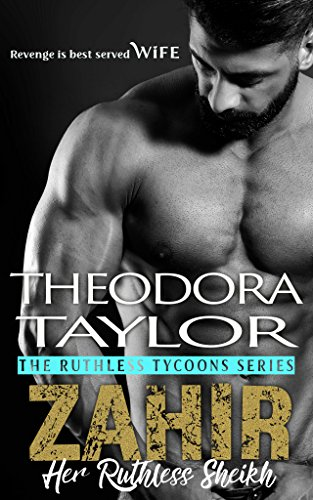 Y’all. Have you ever started a book and within one page you know that you’re not going to put it down until the very end? Zahir: Her Ruthless Sheikh does just that, pulling you in until, before you know it, it’s midnight and there’s no way you’re gonna stop now (true story, and why I was struggling at work the next day).

I am a huge fan of Theodora Taylor’s romance novels. I found her at a time when I needed to read stories with protagonists that looked like me being loved by all sorts of men. It doesn’t hurt that she also has werewolf stories and a massive intertwining of characters throughout her books that puts Stephen King to shame. Although her males are the definition of “alphas” (sometimes literally), they aren’t gruff jerkwads who disrespect a heroine’s boundaries or use her without consent.

Zahir: Her Ruthless Sheikh is the second entry in Taylor’s “Ruthless Tycoons” trilogy. Holt: Her Ruthless Billionaire was released in December 2017 and Luca: Her Ruthless Don is set to be released June of 2018, and while I did enjoy Holt’s story and I’m excited for Luca’s, something about Zahir tickled my fancy in particular.

The protagonist of this story is Princess “Prin” Jones, the daughter of hip-hop mogul Majesty Jones turned devoted sister to orphaned twin girls. She finds herself in hot water when she kisses the King of Jahwar, a country in the United Arab Emirates. The only way to remedy this scandal is to have a temporary marriage, in title only. That is, until Zahir decides to train Prin in his way, and his tastes.

Like, this story is hot y’all, and if you enjoy Domination with a sub who can hold her own, then this book is for you. If you like stories that pull you in and make you have butterflies like you’re the one being pursued by a hot sheikh, then run to amazon and press “buy now.” I plan on re-reading this story ASAP—it’s that good.

Recommendations (I’ve read each of these several times)