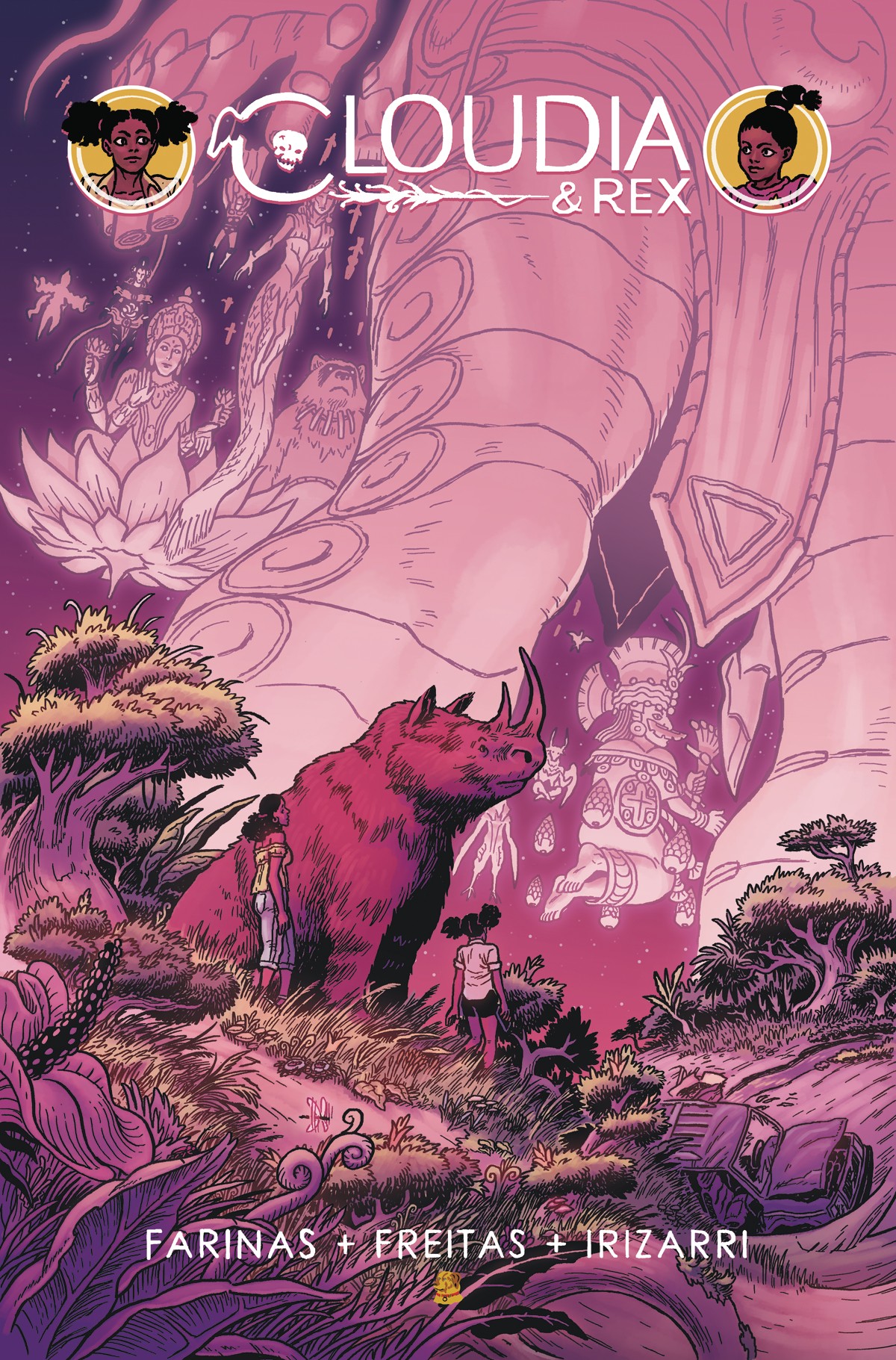 From Roar Comics, in collaboration with Buno Books, is a new title, Cloudia and Rex. Chapter One written by Ulises Fariñas and Erick Freitas, introduces a world where a pantheon of gods are in turmoil due to the rampaging of the Seraphim. Death steps up as the gods’ savior and transmits them through the Quintessence to the realm of mere mortals.  The gods’ flight intersects with Cloudia and Rex’s journey to their new home, which results in some interesting changes in the girls.

To be honest, I wish the whole god pantheon conflict was explained in a future issue, which would allow the clever banter between the family to go a little longer after the encounter. Also, I sort of got lost in the pantheon and the relationships, but I do understand the need for it, to support the next chapter.

Daniel Irizarri’s art compliments the story and the intended audience well, this includes depicting Death as a pseudo-menacing but affable hero. The dominant use of pinks, browns, and blues, keeps some of the more troubling moments in a lighter context.

For both video games and movies, there are rating systems that suggest the appropriate audience for that medium.  While up until the early 21st century comics had a voluntary censor board, the determination of age appropriate comics has been largely left to the comic book store owners. While I am not advocating for an MPAA-style rating system, I sometimes wish for some type of notice about the intended audience.

While there is no strong language, there is a merging of several religious mythoi that may go over some folks heads, but the more I think about it, it really doesn’t detract from the story.  The cover does recommend 14 and up, and because of Cloudia and Rex’s circumstance, I guess that is appropriate. But kids a few years younger should not be scarred for life if they pick this one up.

When my peers find out I’m a comic book nerd, they all desire recommendation for their kids. There are independent titles for kids, but many are hard to find even on Comixology. So, I mostly stick to the “major” publishers for up and coming Blerds under 9 years-old. For them, my default is the first 6 issues of Moon Girl and Devil Dinosaur.  For Blerd tweens and teens, my go-to recommendations are Ms. Marvel and the Invincible Iron Man.

As introductions go, Cloudia and Rex is okay, and seems to set the characters up for a grand adventure.  Also, there is a little bit in the story for everyone, so I may take a ride with them for an issue or two.

Issue 1 of Cloudia and Rex was released in print early July and is available digitally.

E. Angel is an engineer and holds a BS in electrical engineering from North Carolina A&T State University.  She’s a real nerd who loves all things Star Wars and Star Trek, and is an avid gamer.  E. Angel can be reached at e9of10@gmail.com or on most game platforms as Bunnehs Sister.