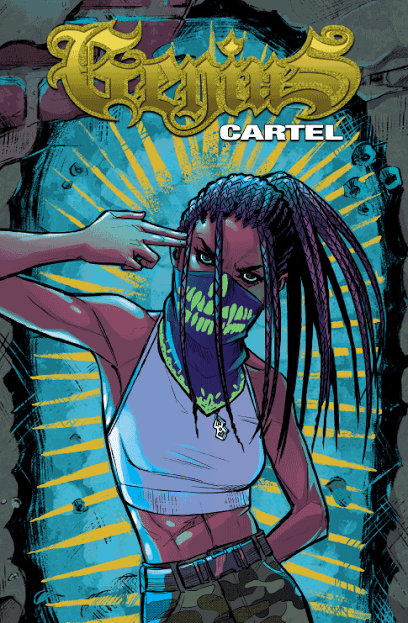 As you are no doubt aware, this website is dedicated to celebrating black girl nerds, the things we love, and those who support us. No comic I’ve read of late better exemplifies one of the dynamics of being one of us than Top Cow’s soon to be released Genius: Cartel. The issue is drawn and colored by newcomer Rosi Kampe and Brad Simpson (Sex, Vengeance), respectively. As the cover demonstrates, Kampe and Simpson have provided a good foundation that pushes the story forward with a rather slate palette that speaks to Destiny’s new life. Marc Bernardin and Adam Freeman (Castle Rock, Alphas, X-Men Origins: Nightcrawler, The Authority, The Highwaymen) continue the journey of Destiny Ajaye as the seventeen-year-old military genius finds her place. Genius: Cartel picks up from the August 2014 Genius limited series. We find Destiny Ajaye in the clandestine Madrasa Institute, having been “recruited” after beating the Los Angeles Police Department to a standstill using the marginalized and misunderstood citizenry of south central Los Angeles.

The question for Destiny in Genius: Cartel is whether she has something to learn at the Madrasa Institute or something to teach. Newton’s Third Law of Motion states that for every action there is an equal and opposite reaction. This means forces occur in pairs. When one body pushes against another, the second body pushes back. If you look up the definition of the word destiny, you get words like purpose, intention, and calling. Ajaye is a little more telling as it means unconquered or invincible. So, you could say the first issue of Genius: Cartel explores what happens when you apply an external force to an invincible calling. On another level, this story seems to be exploring both the distance and danger that can occur for people of color when the mainstream deems to acknowledge our talents. The recognition can lead to a distance as others inadequacies and insecurities are revealed. The danger comes from the never-ending gauntlet that we maneuver between fear, doubt, exploitation, and due recognition for that talent. 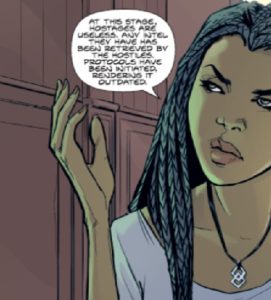 The limited series did a great job illustrating the complexities of the community through Destiny’s maneuvering through the loyal, the betrayers, the good cops, the bad cops, and the system. However, its debut was tempered by the real word birth of the Black Lives Matter movement with the death of Michael Brown several days after issuance. The ongoing tensions were not the greatest time to have a comic series out that included armed resistance to law enforcement. While not necessary to understand what is going on, I do highly recommend picking up a copy August 16th. On its own Genius: Cartel is a great start to what is sure to be an intricate and engaging journey, and I can’t wait to see what Destiny has in store.

E. Angel is an engineer and holds a BS in electrical engineering from North Carolina A&T State University.  She’s a real nerd who loves all things Star Wars and Star Trek and is an avid gamer.  E. Angel can be reached at e9of10@gmail.com or on most game platforms as Bunnehs Sister.