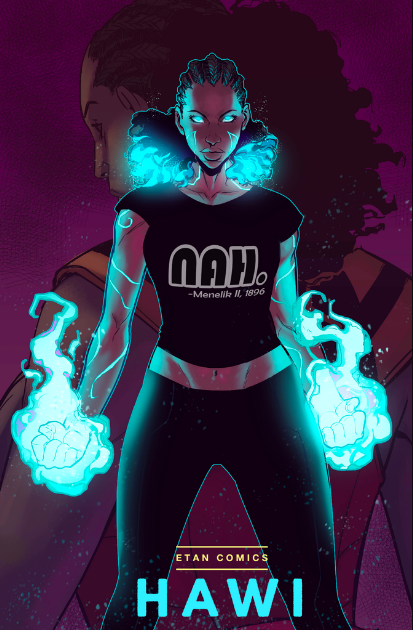 Etan Comics presents Jember and Hawi which tells the beautiful tales from the African diaspora.

While perusing the aisles at one of the summer conventions I attended, I ran across an unassuming gentleman. What caught my eye was a magnificent Black female superhero that adorned his booth and that some of his titles were not in English. While you occasionally run across a title here and there in Spanish, Amharic (the national language of Ethiopia) is not that frequent. The title available was Jember. It was created and written by Bererat Debebe, with the art done by Stanley Obende. There were two issues available at the table, so I took a chance.

It seems like our knowledge of the continent, not country, of Africa comes from the dictator-led violence on the news, the endless safaris on the nature channels, the focus on the grand ancient civilization in the northeast corner of the continent, or the fanciful portrayal of a fictional technologically advanced nation. While the major publishers tend to reinforce the stereotypes of Africa through titles like Jungle Action, which held the first solo story featuring the Black Panther, the routine life of people on the continent are normally ignored. There was an attempt at normal people for a time at DC Comics with the Batwing series in 2011, but the hero’s time in Africa was quickly ended as the character immigrates to Gotham City and another rises to take his place.

What I liked most about Jember was that it went through the day of a normal man, Amanuel Tilahun, who happens to be in Addis Ababa, the capital of the country of Ethiopia. After a day of job hunting, he is playing football (soccer in America) with his friends. He scores, and the ball (as they tend to do without a net) goes off into a ditch. Everyone else calls it a day, but Aman does not. He retrieves the ball, but the ground disappears beneath his feel and he discovers something that changes his life forever.

The second issue is a great way for the newly minted hero, Jember, to find out about his new abilities. The cohesiveness of Debebe, Obende, and the colorist Akanni Akorede enhances the storytelling. There is a page in the first issue where the character is playing football that really makes you feel the action. With two issues in, there is a reasonably likable character who gets powers, explores them, and has to use them to clean up a situation he created — think Greatest American Hero or the more recent Shazam movie. The source of the abilities, an ancient civilization that existed partially in Ethiopia and Eritrea, is hinted at but not really explored or explained. Also at this point, Jember seems to want to do good, but his motivations still remain unclear. I gave my issues to my brother and his comment was, “Black Panther without all the royal stuff.” I can’t argue with that, so I will just leave it there.

Although not head-over-heels with Jember, I remembered the magnificent Black female superhero and wondered about the status of the release of that title. I was in luck. It was available on the Etan Comics website and the Kickstarter was active. The hero is Hawi, and it is also by Debebe and Obende. The first issue starts with the early life of Ement Legesse and the mysterious death of her father in Ankober, Ethiopia. Not willing to raise her child in Ethiopia, her mother moves her family to the United States. A relative’s death leads Ement back home to Ethiopia, where she discovers her father, her friends, and several mysteries. Unlike Jember, Hawi seems to establish the conflict up front with the mysterious death of her father rather than focus on the supernatural abilities. I also found the ending compelling as we, like Hawi, have a WTF moment after she takes a literal leap of faith without any thought for the consequences and ends far from where she ever imagined.

There is something for everyone in the Etan Comics Universe, but the one I constantly watch the website for updates is Hawi. The Kickstarter is doing well, with them working on the stretch goals as they are at four times their goal the last time I checked. So if it is not clear, take a chance and support the Kickstarter or purchase either at the Etan Comics website. Of all the Black indy titles I read, I wouldn’t be surprised if Hawi is the one we see one day on the screen.

E.Angel is an engineer and holds a BS in electrical engineering from North Carolina A&T State University. In her spare time, she works at her comic book store — Brainstorm Comics and Gaming — when she is not writing. She’s a real nerd who loves all things Star Wars and Star Trek, and is an avid gamer. E.Angel can be reached at e9of10@gmail.com or on either game platform as Bunnehs Sister.