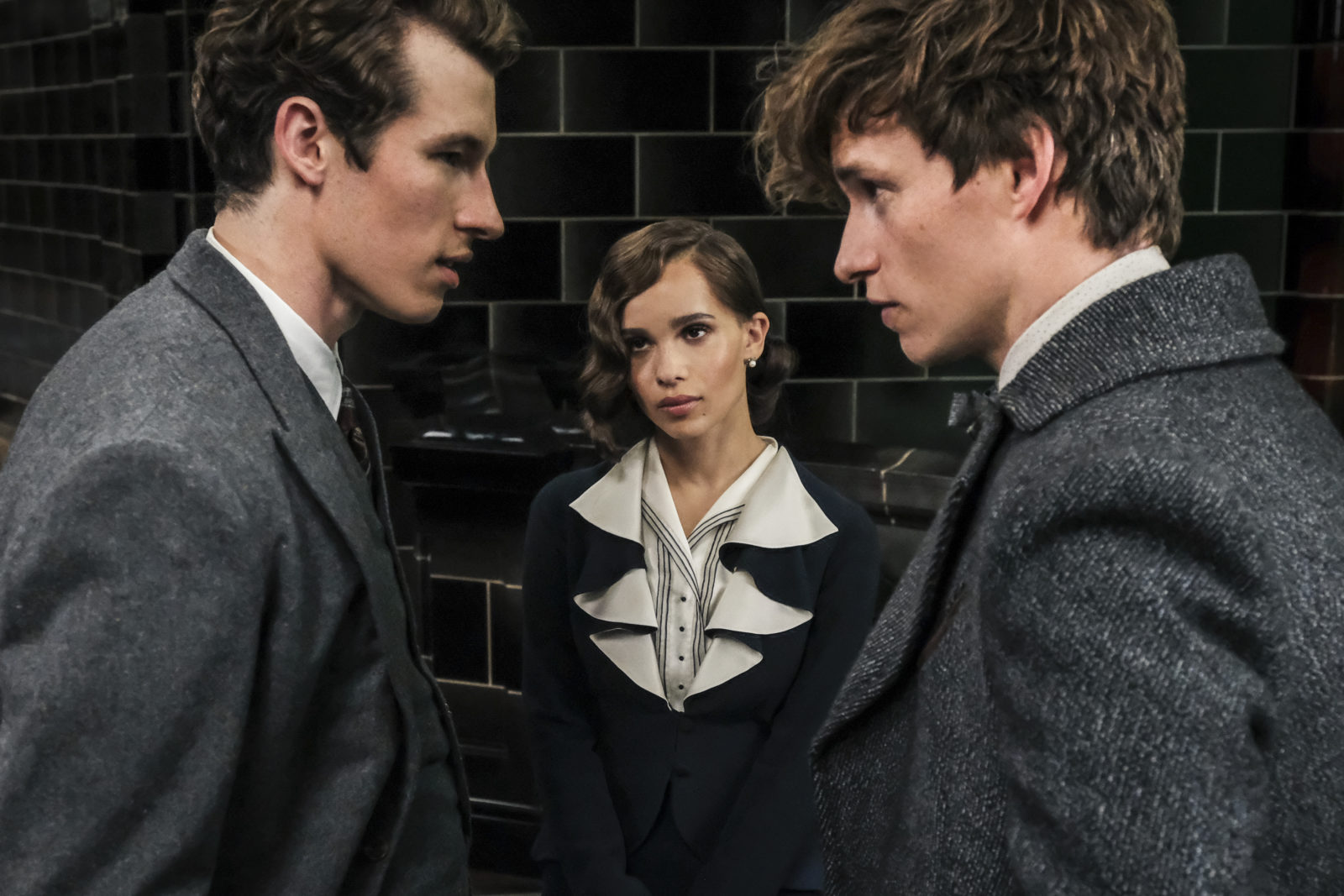 Fantastic Beasts: The Crimes of the Grindelwald, the second in a series of Harry Potter prequels by J.K. Rowling, picks up not far from where the first film left off. Dark wizard Gellert Grindelwald (Johnny Depp) has been captured and Newt Scamander (Eddie Redmayne) is back to his world of sweet, magical creatures.

If he’s still crushing on Tina Goldstein (Katherine Waterston) or if he’s aware that his former lady love and brother’s (Callum Turner) fiancée, Leta Lestrange (Zoe Kravitz), is still crushing on him, there’s little acknowledgment. Instead, Newt is basking in his bestselling book, Fantastic Beasts and Where to Find Them. He’s also forged a new mentor friendship with the illustrious Albus Dumbledore (Jude Law). Tina’s sister, Queenie (Alison Sudol) is still hopelessly in love with unmagical human (or “No Maj” for those in the know) Jacob Kowalski (Dan Fogler). She’s so in love that she’s pushing for commitment. That is not unusual but Queenie is a woman with powers.

Meanwhile, Newt is under a traveling ban because of his magic and his involvement with Tina. This means the very thing that he wants to do, he can’t — travel to see her and proudly show her his new book.

On the whole, though, things are going pretty well until something truly awful happens to make everyone go down that dangerous, dark rabbit hole again. This world, set in the early part of the 20th century, isn’t nostalgic. It’s full of visually dark places, menacing creature, and evil people.

Fans of fantastical special effects will like this version probably as well as the first. Oscar and Bafta-nominated Christian Manz’s (Harry Potter and the Deathly Hallows) effects are fast and fierce, always in some way, driving the story forward. 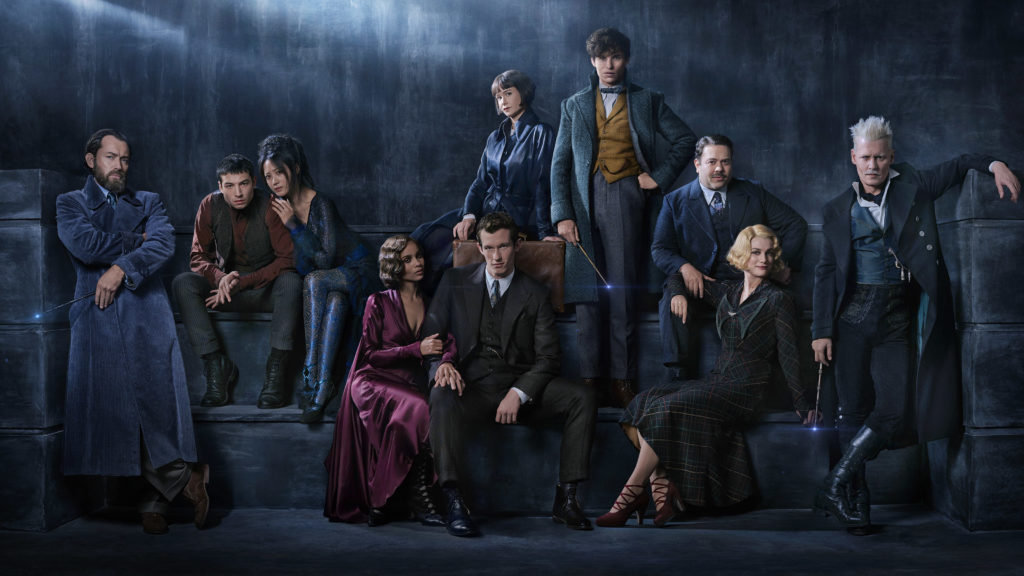 However, this isn’t just a little over two hours of special effects, plus creatures large and small. Grindelwald, like Rowling’s Harry Potter movies, carries real-life themes. Audiences will be glad to know that all the characters from the first film are back but they are not only making heroic choices but life choices. Choices from which there is no going back.

Reportedly, Rowling has spoken of how her Harry Potter stories have universal themes that most can relate to. Those include love and loss, good and evil, and abiding emotional ties such as friendship, loyalty, and trust. All of these are in abundance in Beasts.

Eddie Redmayne gives another assured performance as quiet, unassuming magizoologist Newt but with just a little more toughness. He plays well off Jude Law, who, as a younger Dumbledore, has to tease a bit of the Hogwarts version of his older self.

In doing so, Law comes across as someone restraining their power. Someone who is younger but also carrying a burden and world-weary.

Dan Fogler and Alison Sudol enrich Jacob and Queenie with so much of the 1920s era that they remind you of old Hollywood-era stock characters. Jacob is the wise-cracking boyfriend while Queenie is the shop girl with the heart of gold.

All of this is in a good way. They are the heart of this movie. It is their love of each other and willingness to believe in things greater than themselves that sometimes leads to tragic consequences.

Katerine Waterston gives a strong and determined performance as Tina. However, her character’s presence in this outing seemingly serves little purpose other than to establish her connection to Newt and her sister. There’s little for her to do other than uphold the magic law under MACUSA (Magical Congress of the United States of America). 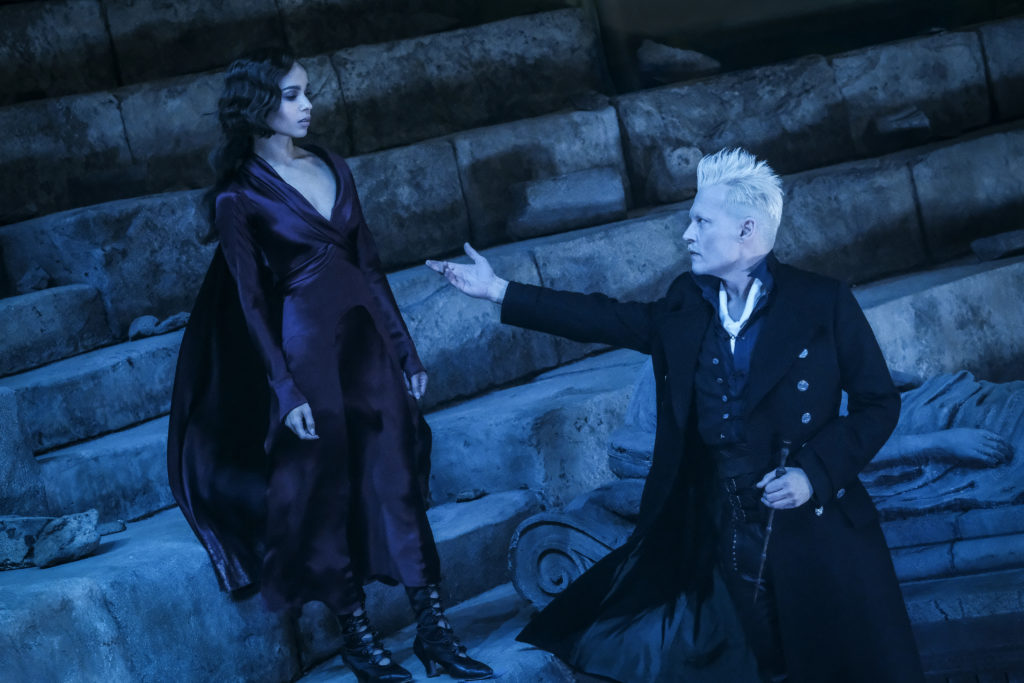 Johnny Depp’s sharp-edged portrayal as The Grindelwald is a reminder to not repeat the mistakes of the past. In Depp’s sly performance, the dark wizard is every demagogue that ever lived. Grindelwald is that person who actually thinks he can lead by preying on a nation’s fears and weaknesses.

He seeks to destroy and conquer but tells the masses that it was their idea.

Like Waterston’s Tina, Zoe Kravitz delivers another strong performance as Leta (and there are some whopping reveals for Potter fans and fans of the first film!), and, like Waterston, Kravitz seems to be just filling in a bit of screen time. These characters need more to do.

The only character whose fate fans already know for sure is Nagini, played as a half human by Claudia Kim. Sadly (or not depending on if you’ve seen a lot of the Harry Potter films), Nagini will eventually turn into a snake.

The sad, bewildered and somewhat angry Credence is played well by Ezra Miller. In continuing with themes, Rowling wrote a vulnerable character who is searching for himself. In a world of dark magic, that journey is perilous.

Fantastic Beasts: The Crimes of the Grindelwald is in theaters nationwide.