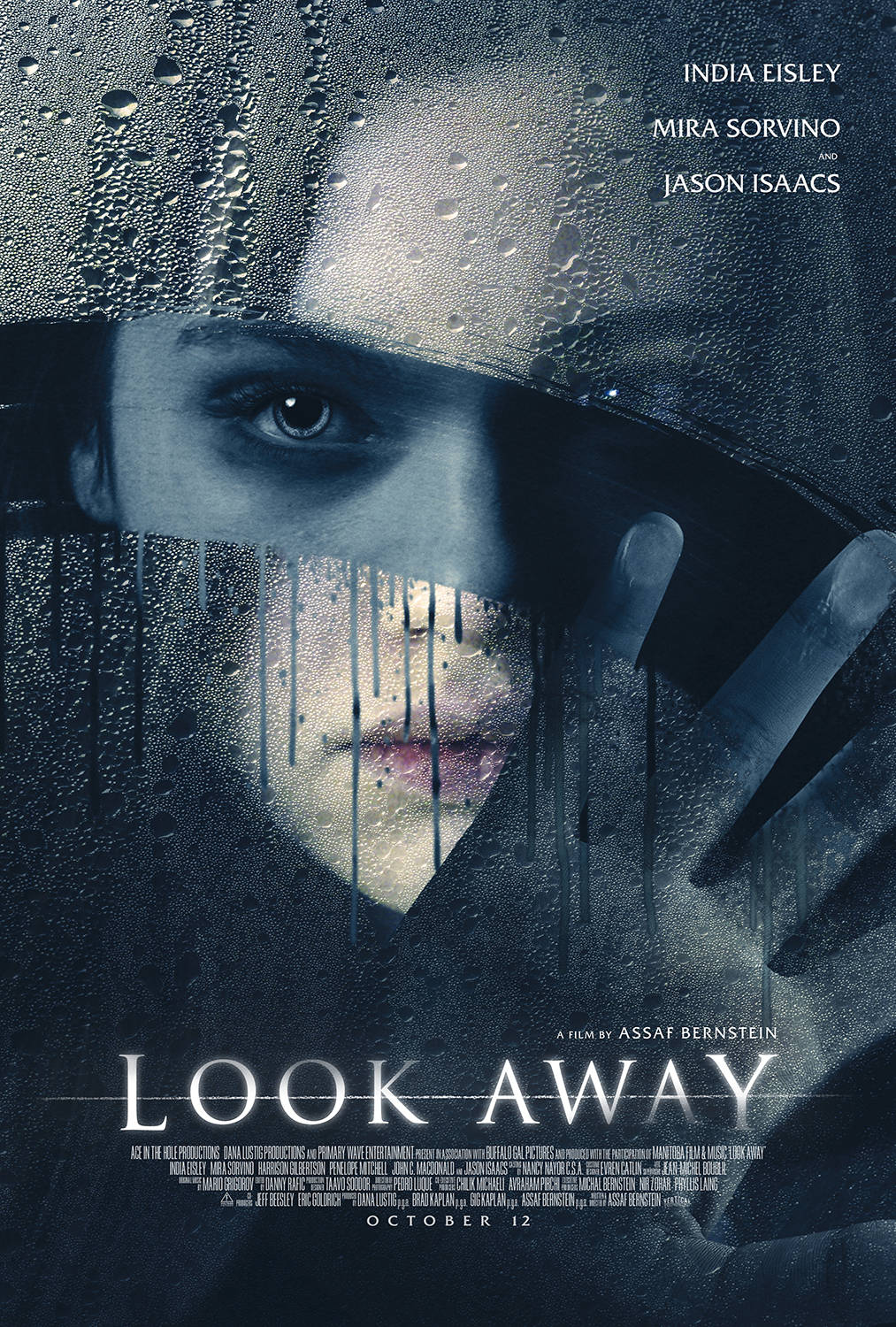 I’ll start off this review by saying that Look Away is no different than any other thriller you’ve seen before about a super wealthy and privileged white family with a myriad of domestic first-world problems and yet, somehow or another they suffer a tragic demise due to their selfish, narcissistic ways. The catalog of films that come to mind are Glass House, Mother’s Boys, American Psycho, Cruel Intentions and the list goes on. You won’t find anything groundbreaking here.

If you’re expecting to see something different while watching this, then perhaps you should look away and find something else. 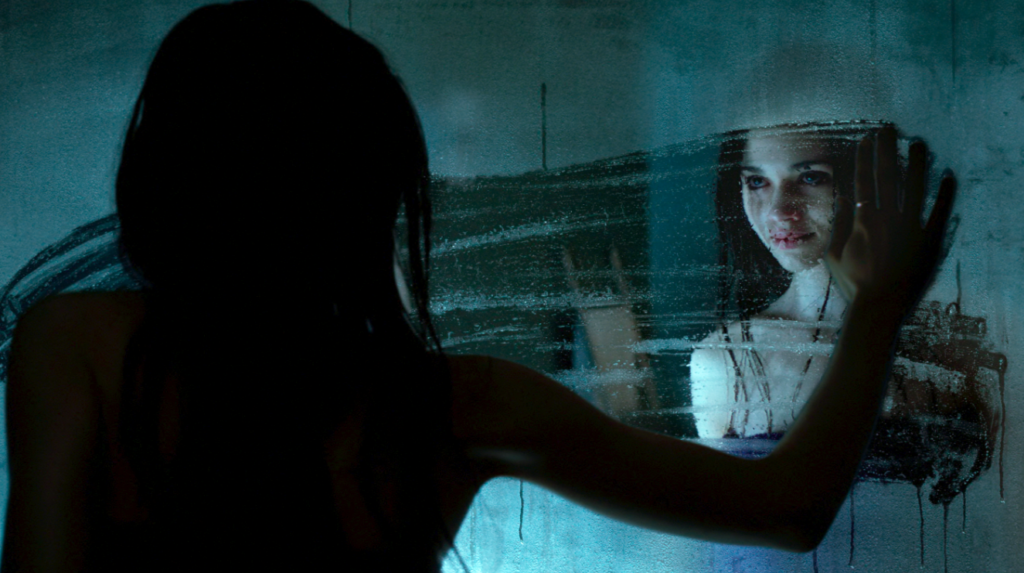 Look Away stars India Eisley, Mira Sorvino, and Jason Isaacs and is directed by Assaf Bernstein. The film tells the story of Maria (India Eisley), an alienated high-school student whose life is turned upside down when she switches places with her sinister mirror image. The film is flimsy in presenting us some clear exposition as to why Maria is so reclusive and detached from all of society, other than the fact that her parents are pretty terrible people.

Her mother Amy (Mira Sorvino) tries her best to console her daughter but is in some serious denial about Maria’s mental health and well-being.  And also the fact that her husband Dan (Jason Isaacs) is cheating on her. It is Amy’s obliviousness to her daughter’s state of mind that makes her so terrible and the fact that she’s willing to put up being married to someone who emotionally abuses their daughter. Her father Dan is a real piece of work. A plastic surgeon by trade, he’s obsessed with perfection and forces beauty ideals on his daughter to maintain a pristine appearance.  As the womanizing and egomaniacal breed of plastic surgeons, he’d even give Dr. Christian Troy a run for his money. 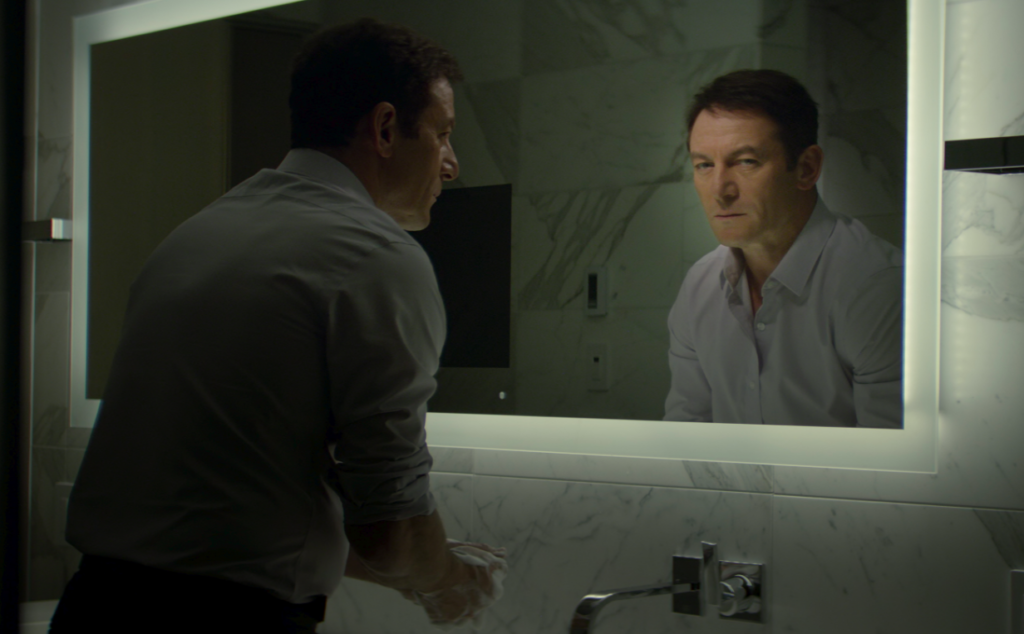 However, the movie is too superficial to even let the audience in on Maria’s backstory and we’re forced to deal with the fact that she’s just an unhappy rich girl with self-absorbed parents.  And as egocentric as this appears it gets even worse when Maria speaks and sees an evil image of herself reflected back at her.  The image — whose name is Airam — in the mirror looks, sounds, and has Maria’s cadence — only she is far more menacing.

Of course, Maria is enraptured by Airam (her mirror self) and bonds with this evil-spirited personality who apparently is her only friend. This opens the door of opportunity for the ominous entity to get into some wicked deeds as she takes over Maria.  The shy, frail and introverted Maria is now trapped in the mirror and the sadistic Maria is ready to wreak havoc on all of those who have wronged her.

It’s incredibly predictable that Maria is teased in school by her peers, there’s the male bully (who secretly likes her) and the shallow girlfriend who is only her friend when it’s convenient. It’s like every other dejected high school movie you’ve seen with the protagonist as the outlier and you can’t help but laugh at how easy it is to guess who inescapably becomes the target of Maria’s wrath.

There’s also the disturbing use of nudity in some of India Eisley’s scenes. The film does make it clear that her character Maria/Airam is 18-years-old and the actress herself is 25 but looking at her face and her body she could easily pass for a teen.  Even quite possibly a pre-teen.  Seeing her nude felt a bit gratuitous and in my opinion, had no cause for framing the story, unless seeing a prepubescent-looking body was intentional. Which is incredibly creepy.

Academy Award-winning actress Mira Sorvino was barely given enough to do and it was a tragedy seeing someone with her talent wasted away in this lousy excuse for a motion picture. John Isaacs, whom I also admire was given a little more meat in his script but even his performance couldn’t save this movie nor its underdeveloped story.

Look Away is one of those movies you play when you are cleaning your house, listening to the sound of your TV in the background as you go. You’re not paying attention, you just have it on to keep some ambient sound.  The movie is literally white noise.

Look Away will be in theaters and on demand October 12th.

Will Forte and Jason Isaacs Give Us the 411 and the SCOOB!