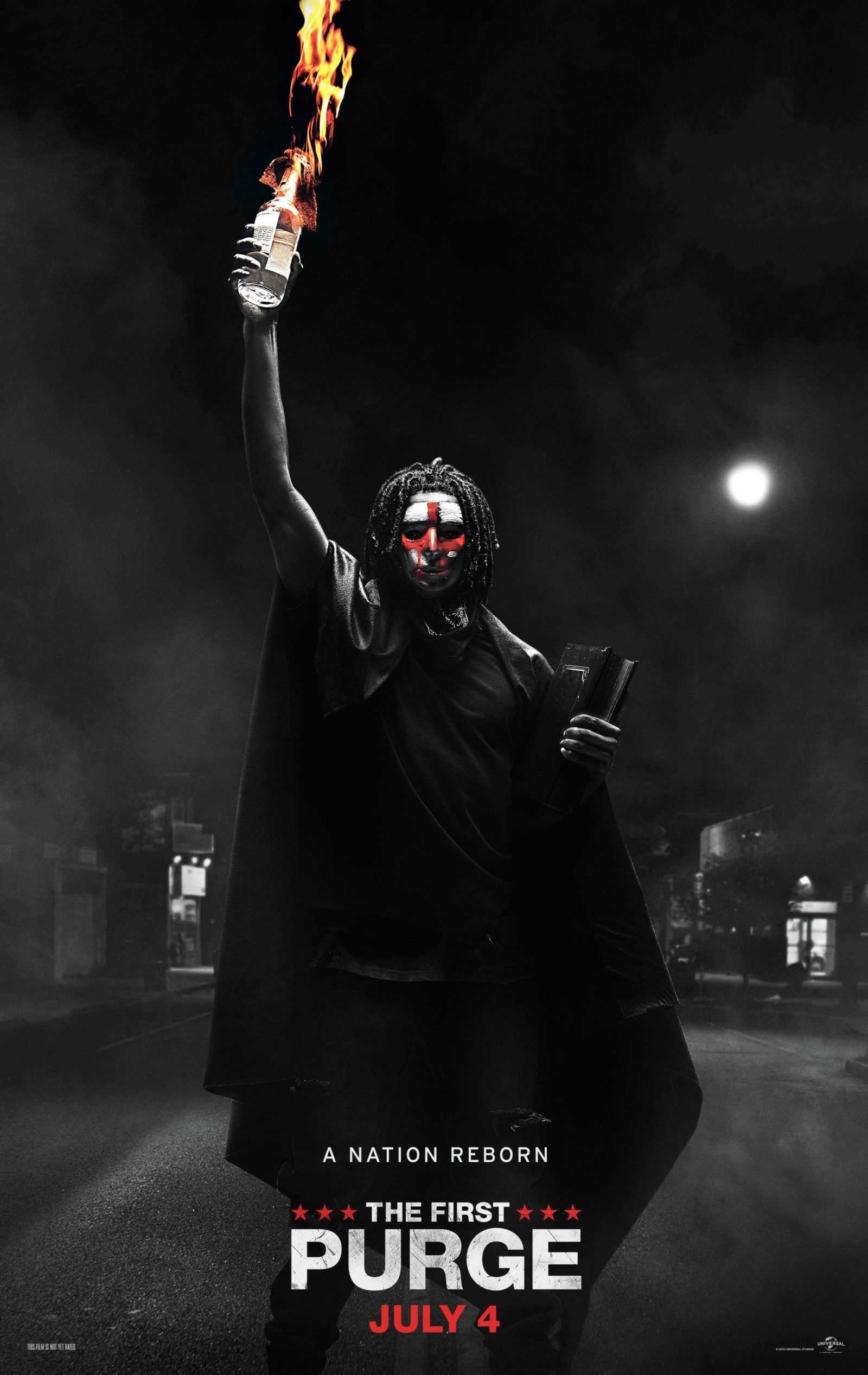 The First Purge is the prequel and fourth installment of The Purge film series. This time around, fans get to witness the first ever “purge” or the government-sanctioned killing of fellow citizens. What started out as a government psychological experiment on Staten Island ends up birthing the political horror film that changed the genre. This particular Purge truly earns the “political horror film” title. It’s not scary at all, despite a few jumps and shocks.  In fact, the scares are not what audiences should worry about—it’s the politics portrayed in this film.

The movie opens with a very disturbing, “sick” looking man–most likely a prisoner– being interrogated by a government agent. The agent asks the guy several questions related to how angry he is. The way this man responds shows that he will definitely be participating in the purge—and enjoying it. After this scene, the film cuts to a news broadcast. Several videos of people protesting who are generally angry and confused dominate the news this night. Turns out, they are reporting on first annual “Purge”.

The film’s focus shifts to a poor Black family: a young Black woman and her even younger sibling, Isaiah. We are also introduced early on to Demetri, aka Dee, a big shot drug lord. In the Park Hills Community in Staten Island, everyone knows him and what he does. Apparently, Demetri and the young girl have a history. That information is teased out later on.

It’s back to the government, where poorer neighborhoods are being chosen (targeted) for the Purge, I mean, “psychological” experiment. Just as we all thought since the Purge film debuted in 2013, the system was discriminatory. This scene with the government officials spells the fact that the success and future of the Purge depend on the number of people participating and the amount of violence that erupts – specifically in the Park Hills neighborhood. As an incentive to get people to participate, the government is offering anyone who stays in Staten Island during the Purge $5,000. Active participants in the Purge (the murderers, just to be clear) would receive more.

The people participating would receive Blue Baptisia flowers–the official flowers of the Purge. This tradition of having the flowers at the door continues throughout the rest of the films but is largely ignored by purging citizens. They would also receive contact lenses equipped with both a tracker and a video recorder. Obviously, the powers-that-be were itching to get some data from their project.

The film took about 20-25 minutes before the Purge and any starts. The beginning of is mainly just an introduction to both the characters and the purpose of the purge. The audience also got a look at how people were taking the news and preparing for what’s to come for the night. Once the real action we want in The First Purge fully starts, it’s the government that is about to go nuts right along with the people.

The First Purge eerily depicts and discusses the seemingly corrupt government that we have now in 2018 Trump-led, MAGA America.  It goes deeper to capture just how easy it is for the government officials to manipulate and shape society in any way they want. The middle-class citizens would have no say, and poor people would be the target of all that pent-up hate and rage.

Seems about right? That’s the genius of this movie series.

One minor flaw I found was in the treatment of Demetri, who plays a big role in helping his neighborhood during the Purge. He seems to have fighting skills, but he is also a really big drug lord.  It just does not make sense to have him armed militia and have the expert fighting skills. The fighting betrays him as more than a drug dealer, but the script said otherwise. He should have been portrayed as special forces veteran or secret agent who had trained for this day his whole life.  The narrative wants us to see him as a guy who grew up in the hood, got in with the wrong crowd, and became a drug lord. The two images because of the fighting and other elements, did not mesh. They were not realistic or convincing at all.

The First Purge is an enjoyable film. I found myself wanting to yell at the screen. I did actually talk out loud as the characters ran the wrong way or missed an opportunity to take down some purger. There was plenty of action and thought-provoking exchanges that kept me engaged. The government agents were so calculating and brutal in shielding their discriminatory practices and reconstituting them as logical solutions to America’s problems. There was never a “down” or dull scene.

Despite the slow start and heavy political themes, The First Purge does come out as a very exciting political horror film. It tackles the political topics so well that the real world we live in seems on the verge of a Purge too! Audiences will enjoy this film, but come away from it with a lot of questions about our own government. Maybe that needs to happen in order to activate Americans to change