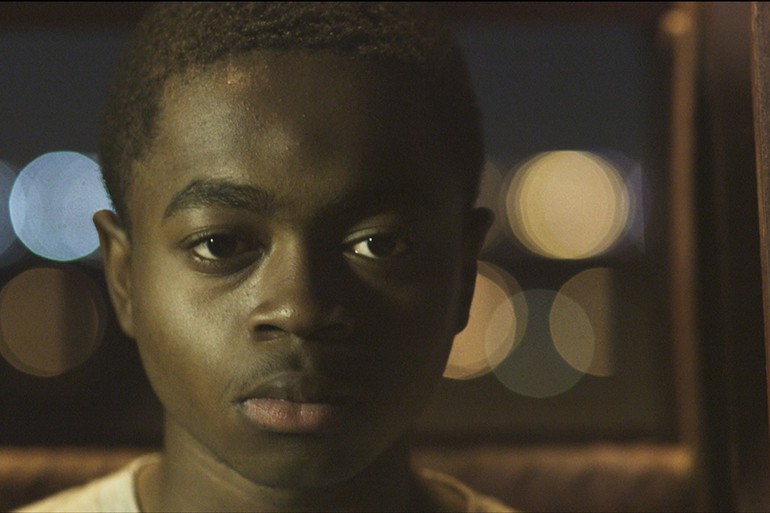 There is barely a rushed moment in The Transfiguration, even a simple verbal reply. Central character Milo threads a hardly-repeated route through the grimly verdant patches of decay and grandeur that speak so much of New York City’s charismatic splendor, never landing in the exact same vista. His hunt’s methods are never dramatically overblown and possess minimal poetry, evoking a simplistically wretched and possibly pointless cycle of feeding, binging, and purging.

“The hunt” I describe refers to the path on which vampires tread and feed, reimagined here as a quintessentially urban traversal. Michael O’Shea’s feature-length directorial debut is, above all things, an insistent love letter to NYC. This is the kind of aspect which requires me to disclose my bias here: he absolutely nails it.

There is a particular scene in Netflix’s popular comic book adaptation Jessica Jones: the titular character, stressed, down, and out, wanders into a bodega on a quiet street and asks for a bottle of whiskey. Yes, this is a tiny blunder in the grand scheme—that you may not purchase hard alcohol at any kind of supermarket in NYC—but it reveals much more. It tells me that the people involved in crafting the show either did not seek to accurately represent the city it takes place in (unlike, say, Luke Cage or Daredevil), or, they wanted to, but somehow failed to clear that lowest bar. To put it more grumpily: it’s obvious that nobody from the five boroughs ever watched the final cut.

The Transfiguration is, breathlessly, proudly, a product of our fine city. Every carefully chosen angle and scene considers its space as a diorama rich with quiet meaning. Milo is often captured from a ruminative distance, slinky, unassuming, almost hunted by the camera himself. He lies in wait for food to pass by.

Eric Ruffin’s portrayal is so damaged and worn, so evidently harmed and shaped by the pain wrought on his mind and body by every available aspect of his world, that he has curated a stoic mask with which to greet it. Tormented by the bottom-rung bullies in his school and even the more menacing characters in his project environs, or his brother’s casual callousness, this mask is his most valuable weapon. That, and a pen-knife he uses to feed.

You see, Milo lacks sharpened incisors, an aversion to garlic, or a weakness under sunlight. These are replaced with an obsessive (and selectively groomed?) fascination with vampire movies, slaughterhouse videos, and the tormented self-narration in his composition notebook. You are immediately introduced to the character lapping blood from the neck of an older white man in a suit in a subway bathroom (anybody from the city who has ever been in a subway bathroom can vouch for it as a reasonable horror setting). Nothing about the scene is romantic or conventionally poetic (unless you count the basically symbolic revenge of a young Black boy literally eating the caucasian rich poetic, and I wouldn’t get in your way if you did), nor is almost anything in this incredibly cheerless and sobering film. If it’s closest to anything it would be Let The Right One In, a film Milo chooses to reference by name, but I would venture that Let is much more sentimental in its portrayal of angst and loneliness.

That being said, I was quite frequently shocked or moved by The Transfiguration’s choices. I would even claim that the film’s intentions, dourly pessimistic as they might be, seem to hit their intended marks, with the exception of the boiler room scene. I’m not quite sure why they chose to include it, as almost everything about it—the banter, the energy portrayed, the strangely wicked laughter when someone is shot—is so tonally disconnected from nearly every other part of The Transfiguration’s apparent motivations that I half-expected the film to simply run credits immediately afterward, in the hopes we would forget it that much sooner.

Aside from the stammering headlight-lit deer in this scene, there is one other key white character: Sophie, played with vivacious honesty by Chloe Levine. The chemistry and mystery between Milo and Sophie is what maintained me through the bulk of its remaining time. You never quite know what’s going to happen between these two. Betrayal? Are they both lying to each other? Is Sophie a predator herself? Their early connection saves the film by offering it emotional stakes, easing some of Milo’s stresses as it increased my own anxiety.

Sound-wise, The Transfiguration is incredibly gaunt yet judiciously wields a throbbing, peculiar bass-synth refrain, a motif that lurches between mechanical and animal, always culminating in what sounds like a throttle of bat sounds. You are treated to this refrain each time our protagonist ponders and designs his next quarry and, if you’re anything like me, you’ll soon sway along with it, nervously anticipating what’s to come. It might be the only real bit of adjusted audio designed for the story, but it finds confident purchase in the film’s grisliest episodes.

I might advise those who compulsively check their phones while watching slow-paced movies to miss this one, but that wouldn’t be responsible. Maybe instead, I’d recommend that these same members of the audience carefully observe what can still be done, in 2017, with an unspeakably tiny budget, brilliant photographic direction, and a closely-felt connection to an actor and environment. While the racial themes presented in The Transfiguration are subtle and even sometimes clumsy, I cannot immediately remember any recent horror films depicting a similarly lonely, freak-feeling Black young man designing their own destructive road, drafting their redemption while doomed. I felt suffocated by this story, constantly looking for comfort or meaning in Milo’s calm, dismal facial expressions, but rarely discovering any. Even when I wanted to find humanity there I also often fell short. Isolation is ugly, feeling different from the world is ugly, being afraid of and injured by 99% of your world is ugly, and your guidance counselors, well-meaning as they might be, might not save you either. Even if some of our most profitable vampires sparkle in the light, The Transfiguration reminds us that bloodthirst isn’t always romantic.