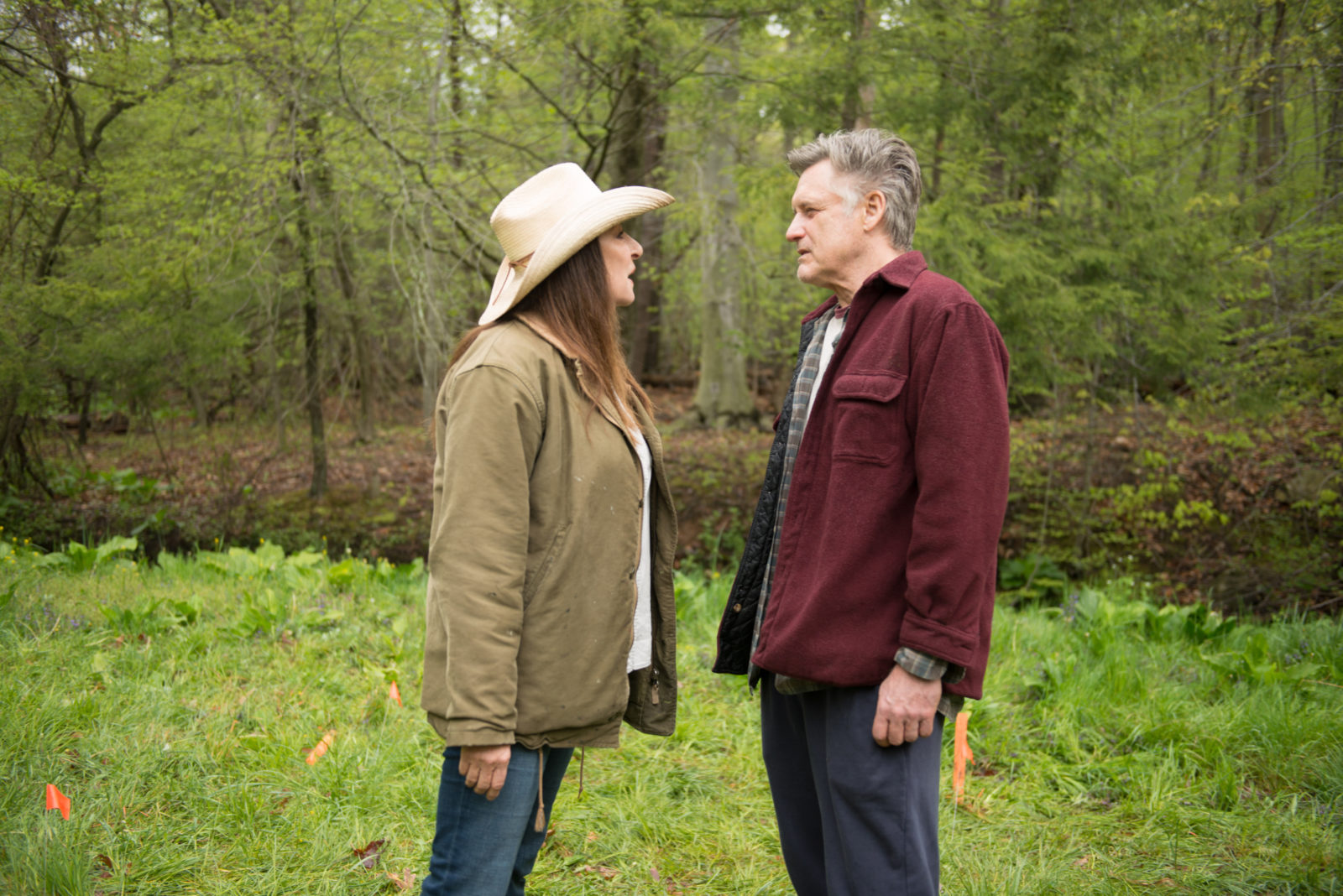 From multi-hyphenate Theresa Rebeck — a filmmaker, novelist, playwright and TV director — is her dark comedy Trouble starring Bill Pullman, Angelica Huston, Julia Stiles, and David Morse. Inspired by an offbeat location of the writer/director’s country home, the story is about a combative brother and sister, suffering from the worst case of sibling rivalry you’ve ever seen. The two relatives are fighting over control of the family real estate and literally almost kill each other battling over who gets what.

Maggie (Angelica Huston) an acrimonious widow, who seems to loathe her brother Ben (Bill Pullman) with every fiber of her being — is determined to clutch as tightly as she can — the rights to her property in rural Vermont. Ben, her good-for-nothing brother, seeks ownership under the guise of having logging rights. It turns out that he only wants to sell
the land to developers right out from under her. Rather than be responsible adults and settle the matter with civility — the two malign each other with forged documents, bribes, collusion, and, even attempted manslaughter. 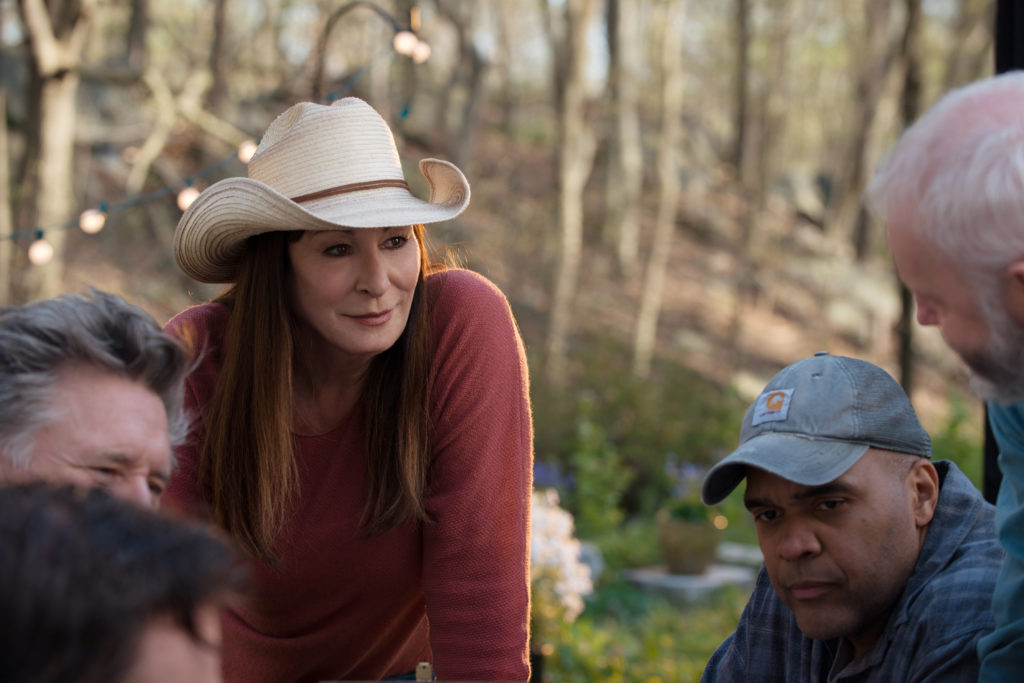 It’s clear through Ben and Maggie’s childhood, the siblings weren’t always so antagonistic. In the story, as an adult, Ben has fleeting thoughts in the form of flashbacks and story exposition that illustrates their close bond as well as their relationship with their father. Ben has spent most of his life in construction and petty crime, but maintains strong ties to family and the place where he grew up. Their childhood friend Gerry shares their connection when they all participate in burying precious items in a shoe box and use it as their time capsule to unearth 50 years later. An adult Gerry (David Morse) has secretly been in love with Maggie and keeps a shrine of her photos from her childhood to early adulthood clamped in magnets to his fridge. It’s a little creepy yet kind of adorable at the same time.

Ben has a son named Curt (Jim Parrack), whom he apparently never told Maggie. She later realizes that her nephew is just as greedy, and as much of a slacker as his ne’er-do-well father — the fruit didn’t fall very far from the tree. Curt’s girlfriend Rachel (Julia Stiles), an insecure and gullible secretary, works for a licensing surveyor office. She gave her boyfriend Curt permits after he deceived her into telling her that Ben had logging rights. How convenient.

The logging rights are what Ben is fighting Maggie for and things get even more complicated when the town sheriff (Brian d’Arcy James) starts sniffing around and asking questions.

It is not so much the story that makes Trouble an entertaining film to watch, it’s the delightful cast of characters. With heavyweights like Huston and Pullman going at it scene-by-scene, you’re drawn to their presence on camera and they give the movie some seasoning. There were so moments with Huston during her ranty dialogue and bossy demands at Ben that her performance seemed a bit stilted. It seemed a bit off, but she later gets back on track especially the moments when the comedy gets a bit more dramatic.

Jim Parrack, who frankly I remember him best as the dweeby-yet-loveable Hoyt Fortenberry from HBO’s True Blood, does an impeccable job of playing a down-and-out son of a father who is a bigger loser than he is. Writer Theresa Rebeck, gives us some impressive character development here with Curt, during his scenes with Maggie and when Curt tells us about his relationship with his father.

The musical tone of the film feels more Southern than a setting in rural Vermont, with the intermittent patterns of a strumming guitar it sounds and often times looks like this story could take place in South Carolina or Georgia. Another cue that gave me the impression that this felt more Southern was the cowboy hat Maggie wears throughout the film — her hat is as clingy as Maggie is about keeping her land.

However, Rebeck intentionally wanted the film Trouble to feel like a classic Western but also have elements of her favorite comedies.  In an interview, she equates Trouble to several small Irish comedies like Waking Ned Divine, The Man Who Went Up a Hill and Came Down a Mountain, and Local Hero. Rebeck appreciates the dichotomy of intimacy and epic action in those stories.