Apparently, the VIP weekend demo, which started on January 28th, was not what they had hoped.  As with many games, server capacity (the ability to get into a game lobby to play) is constantly an issue for demos, betas, and new games.  Some of the earlier Call of Duty: Black Ops server issues during the first release weekend are epic.

The various Battlefield titles were also up there in the multi-minute wait queue for a while.  Despite what the developers continue to post on the website, there is some kind of a connection issue with the server.  My game test crew played for over 12 hours, included fanboys of all generations and a few that played the December “alpha-beta” as my squadmate calls it.  For the beta, apparently playing on the X-box is better than the PlayStation 4. Of course, there is a discussion out there in the ether that originally Anthem would only be for the X-Box.  Whatever.  No matter the platform there is great promise with the game.

First impressions are key, and this game starts out well.  The graphics are on par with anything out currently.  The interaction with the NPCs (non-player characters) is better than the last Mass Effect: Andromeda, which at times seem to have two-dimensional faces in a three-dimensional world.  Anthem has more of a Destiny 2 interaction and that is good.  My first launch was in a suit known as a Javelin, that was Big Bird yellow — think Yellowjacket, the bad guy from the first Ant-Man movie. Then my squadmates and I got into the grind and did okay, except for all of the dying and server disconnections.  Of course, there is an option to customize your armor, which I know can be a big deal for some players.  Basic color changes were free, but there is the in-game currency that could be used to purchase other vanity clothing.

The demo provided access into two modes of the games, which launches from a small fort.  Your character is known as a Freelancer and can interact with some of the inhabitants.  It is obvious that the fort is where the story portion of the game resides.  While I found the story interactions a bit tedious, it is obvious that it was not intended to reveal much of the story during the demo, so there is a lot of opportunity remaining in that area.  Expeditions are launched in support of doing this or finding that.  Typically, your Freelancer deploys in a squad of four.  You have the option of making your squad private or public if you want to do your hermit thing.  Like both Destiny and Destiny 2, the expeditions are better in teams.

For the demo, I found that the matchmaking was done quickly and did a decent job of matching skills.  There was a little advantage during the demo, as your Freelancer started at Level 10 and could progress up to Level 15.  This allowed an exploration of the different weapons at different levels across the various Javelins.

While the Ranger is a good starting place to learn the mechanics, the key is to quickly master the abilities of at least one of the other Javelins.  For the demo, you start out with the Ranger, which is like a basic soldier, equipped with a number of relatively familiar weapon loadouts if you played either Destiny. In addition to the Ranger, there is the Interceptor, a fast, close contact fighter; Colossus the brawler; and Storm which is more of a ranged-fighter. Knowing when to transition to one of the others to complement your squad is essential. The right abilities to complete the expedition, as brute force or close contact may not be the right approach. This lesson was quickly learned by my squad after a lot of respawns made it evident what mixture of certain abilities was needed for certain situations.

The freeplay mode allowed access to three or so of their locations.  Be careful as the critters are restless.  There are all types of creepy crawlers and genuinely inhospitable things stalking you from the minute you step off the platform.  The familiar world events from Destiny 2 are there, but your freeplay is limited to a four-person squad, so it is not overly easy to complete.  One drawback is if you end up with that guy, you know who I am talking about, who doesn’t pull his weight, or is constantly running ahead, there is not much you can do about it.  There probably should be a push to include a kick function requiring a squad vote.

As for the difficulty, for the most part, the weapons seem to be balanced correctly, although the sights on a few can be off a smidge, that may be a demo glitch because it was not noted for other types of weapons.  Regardless of the difficulty, don’t get cocky as the enemy snipers pack a punch that even the best shield will buckle under after a hit or two.  Also, the turrets are oppressive so take them out first. However, don’t forget your ultimate power play.  It is powerful, but it may not solve all your problems, so don’t roll over and take a nap after you shoot your wad. 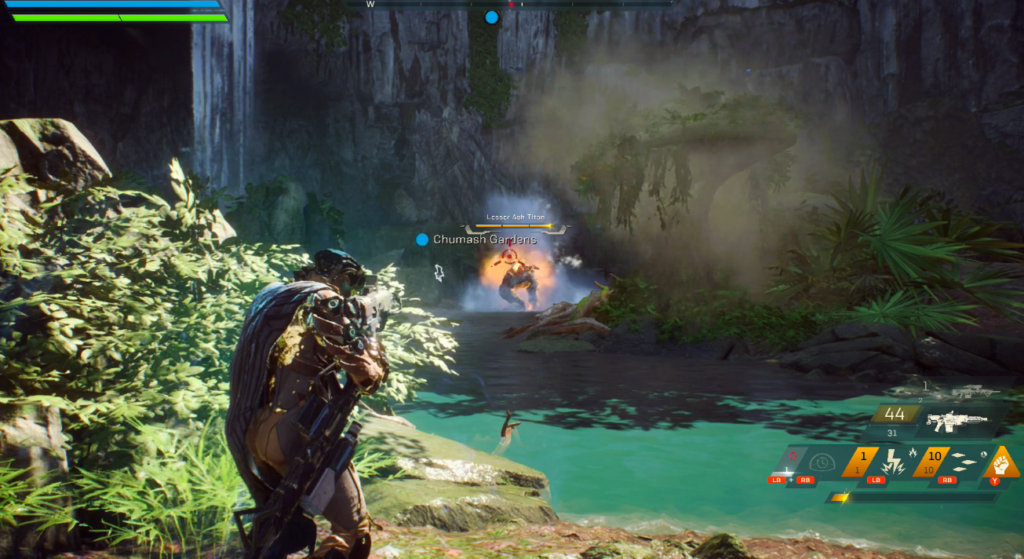 I did find that the controls to launch into either freeplay or the expedition are not so intuitive.  Also, there are some strange nesting for the controls to exit a game (use the map option, not the “Exit Game”) where you would normally think to look for it.  Of course, this may not be that big of a deal most of the time, but at the frequency server issues occurred during the demo, it seemed necessary.  One good thing is that if you get dumped, on re-entering you are asked whether you want to rejoin your squad.  This works well as long as your squad wasn’t booted along with you.

Putting the connection issues aside, Anthem has the potential to be that game you’re still playing in six months. This is a really great game to play, preferably with your friends, as the better the communication the more likely you will be successful on your expeditions.   So start searching the couch cushions, under your car seat and gather your trade-ins, this is the one you want to pre-order.  See you out there, Freelancer!

E.Angel is an engineer and holds a BS in electrical engineering from North Carolina A&T State University. In her spare time, she works at her comic book store – Brainstorm Comics and Gaming – when she is not reading comic books. She’s a real nerd who loves all things Star Wars and Star Trek and is an avid gamer. E.Angel can be reached at e9of10@gmail.com or on either game platform as Bunnehs Sister.