You find yourself alone in what looks to be a dark, rain-soaked alleyway. You’re disoriented. After a bit of fumbling, you manage to find a tiny lighter that you carry on your person. As you explore and illuminate the area, you cradle it in your hands hoping that the flame won’t go out.

Besides the lighter, you notice that you’re the brightest thing around—a tiny girl, named Six, in a yellow raincoat surrounded by eerie creatures that go bump in the night surrounded by a macabre environment comprised of abandoned toys, dirty restrooms, piles of shoes, meat grinders, etc. Oversized, ordinary, everyday objects and spaces that manage to be creepy as hell. As you move from room to room, you begin to notice the slow sway of the floor. You’re not in an alleyway; you’re on water, likely trapped in some sort of nefarious sea vessel. 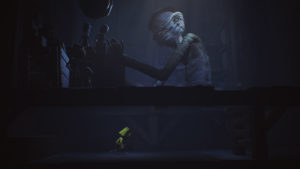 Little Nightmares doesn’t spoon feed its story to you. Instead, it’s found in its creaking doors, echoes of toy blocks in empty rooms, mysterious nomes, and its dedicated, misshapen “staff“ and visitors. The need to figure out where you are and why compels your tiny feet to keep moving and exploring despite your feelings of perpetual fear and helplessness. Yet, you must be careful. Running too quickly through a stage may alert one of the employees to your presence, particularly the blind Janitor whose long, slender arms move faster than your tiny legs can carry you.

Little Nightmares’ soundtrack is beautifully crafted and executed. It’s lullaby-like when appropriate, bringing with it an innocence that juxtaposes nicely with the horrifying, mature world you find yourself in.

However, the sound truly shines when it relies on objects in the environment, such as the dragging of heavy, corpselike objects, the chug of turning gears, the tumbling of toys as you run by, and the clang of a metal spoon as you try to hide from the Chef in the kitchen. All of this adds to the suspense and anxiety you feel as you try against all hope to keep this tiny life, this flame, alive.

After all, the point of the game is to survive and to do that you have to be a master at evasion, platforming, and puzzle solving. The puzzles are pretty straightforward, especially in the beginning. The difficulty does increase as the game goes on—adding chases and tasks that you must complete before clearing a stage. This creates more suspense as you try to solve puzzles without making a sound, passing right under your enemies’ noses. 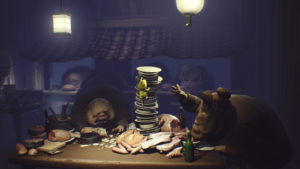 However, there are puzzles that lack this element of suspense, particularly in the later stages. For instance, a few of the puzzles in the final stage were disappointingly easy. It is even more apparent when you spend much of the previous stage thinking on your feet as you try to avoid the inhabitants’ greedy hands while searching for a way out of each room.

Other times, Little Nightmares difficulty stems from poor design choices. For instance, it isn’t always clear which objects are interactive, which makes the game that much more frustrating. Also, platforming is sometimes unnecessarily difficult because of its fixed, sideways perspective, making it tough to land jumps or walk along narrow planks of wood without falling. This isn’t due to lack of skill but rather the inability to tell if you are lined up properly while jumping or if you are too close to the edge while walking.

The game autosaves at checkpoints, but they often erroneously set you back too far, forcing you to go through the arduous task of once again facing the challenges you worked so hard to complete last time. It’s a letdown for a game that gets so many things right. 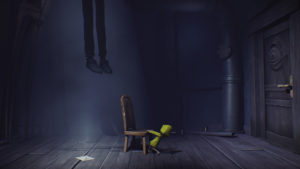 Despite all of this, Little Nightmares is still a solid, albeit short, game. It’s roughly 4 hours long, meaning you could beat it in a single sitting. The Maw and its inhabitants are simultaneously repulsive and intriguing, which surprisingly makes you want to spend more time investigating this dark, grown up world. And that may be the game’s major flaw. There certainly seems to be much more to the Maw than the little bit that you explore. However, the replay value is relatively high, as you’ll discover more clues to piece the story together each time you play.

Little Nightmares successfully creates a fully immersive experience that will stay with you as toss and turn at night, trying to push its nightmarish imagery to the furthest corners of your mind. It’s a horror game worthy of its title.

While short, Little Nightmares is a worthy entry into the horror game genre. When its design flaws don’t get in the way, you are left with an intriguing, understated story, chill-inducing audio, and a gorgeous, haunting environment that harmoniously blend to create a thrilling cat-and-mouse, platforming experience that rivals that of other titles.