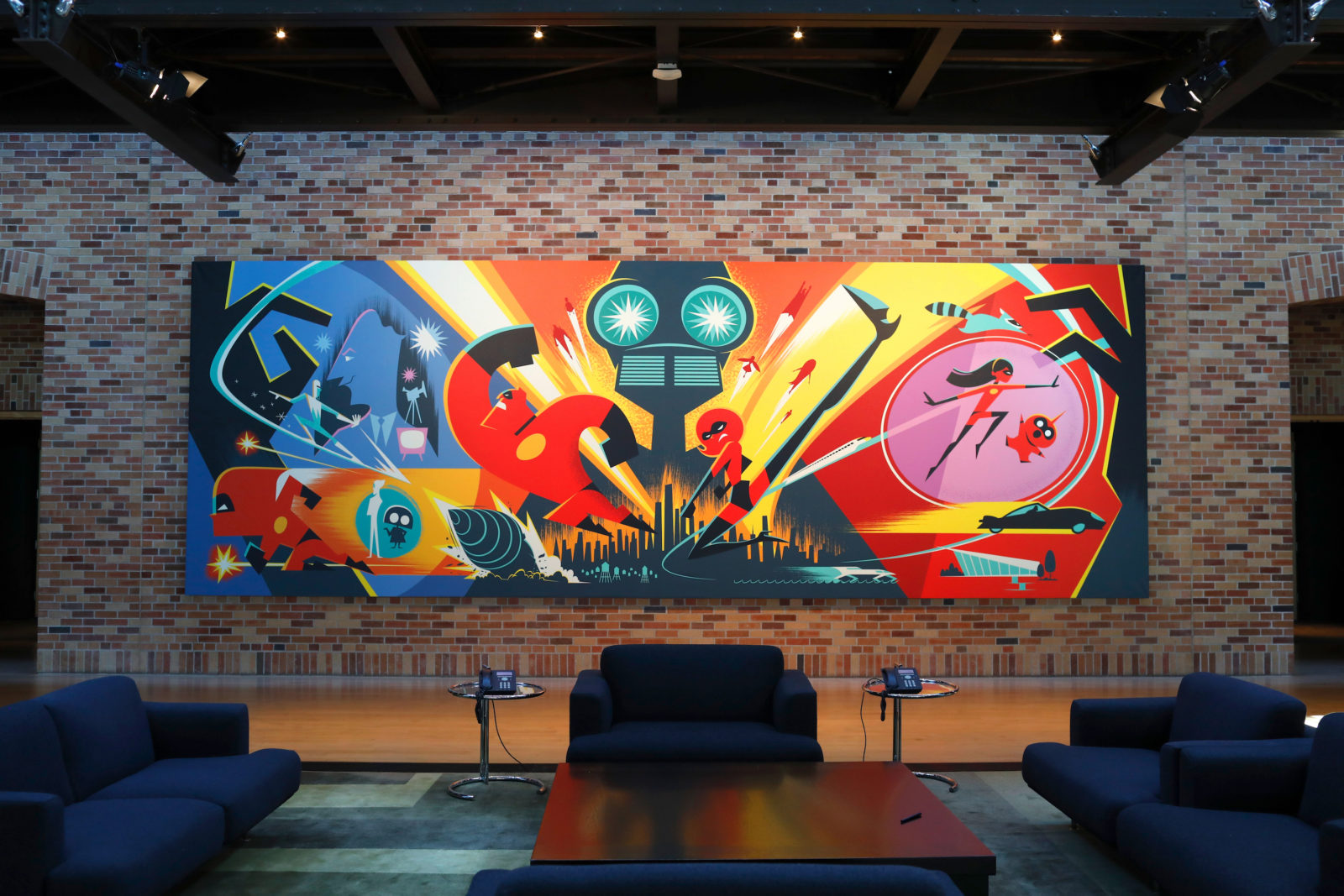 I recently attended a press event for Incredibles 2 at Pixar Headquarters in Emeryville. It was my second time there, but I am a huge Pixar fan, and seeing the giant Luxo, Jr. and ball outside the entrance to the headquarters is still as cool as it gets. Selfie time! 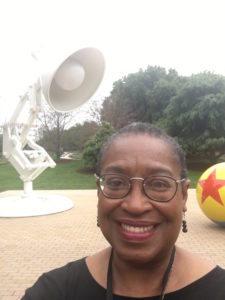 During the event, the press saw footage for Incredibles 2, and Bao, the Pixar short it will be paired with in theaters. We sat in presentations by the filmmakers, and got an up close, personal look at the creative process behind the scenes. We were even taken to the Pixar archives which, for me, might as well have been holy ground.

But even though it was all cool and froody, the feeling that something was missing stayed with me throughout the experience. When you’re a woman of color covering film and television, you get that feeling a lot.

Actually, when you’re a woman of color living in the world, you get that feeling a lot.

The missing something in this case are Pixar characters that look like me. It’s the elephant in the room when you’re a both person of color and a Pixar fan. You love them, but you want them to do better, because it’s no secret that Pixar’s worlds aren’t populated by the most diverse group of citizens. Whether those portrayed on screen are toys, fish, bugs, cars, monsters, or, (gasp) people, they come off as, well, “white” toys, fish, bugs, cars, monsters, and people. Sure, that was before Coco, but Coco can also be seen as the exception that proves the rule. A particularly lovely exception, but an exception nonetheless.

Truth be told, I thought diversity would be no issue in Incredibles 2 because of two characters from the first film two: Frozone and Mirage. Frozone was a sophisticated urbanite of a Super and Mr. Incredible’s best friend, voiced by Samuel Jackson. Mirage was a beautiful and brilliant Bond Girl-type Latina woman, voiced by the late Cuban-American actress Elizabeth Peña. Neither of these characters came wrapped in a “culture-based” storyline.

Another of this type of inclusion was Pixar casting Latina comedian Cristela Alonzo to co-star in last year’s Cars 3 as trainer Cruz Ramirez. When you talk about inclusion and diversity in film and television, it is important that both types of inclusion, character and cultural, are a part of the conversation.

So, I thought, give fourteen years between The Incredibles and Incredibles 2, I expected that I’d see more people who looked like me on the screen. And, really, I was crossing my fingers that I’d see one particular Black woman: Honey.

Frozone’s lady, to whom he addresses the memorable question, “Honey? Where’s my super suit?” She, who let him know real quick that she wasn’t about to let him fly off and ruin her dinner plans. And as for his insistence on doing it for the greater good, there has never been a more classic comeback than, “Greater good?’ I am your wife! I’m the greatest good you are ever gonna get!”

Yep, I wanted to see Honey, voiced by Kimberly Adair Clark, in Incredibles 2. What her story line might be? Would she be a Super or not? If a Super, what would her powers be? I had been imagining what Honey would look like for years, and I wasn’t alone. Honey won a lot of fans in the first film and is arguably one of Pixar’s most popular characters even though she was never seen. Popular enogh that when the Incredibles 2 trailer came out recently, the big story on social media wasn’t about baby Jack-Jack, but that Honey was BACK!

I knew that Honey wasn’t central to the plot of Incredibles 2, but I hoped that she’d at least made it in. I didn’t see her in any of the clips we were shown though I did see a little more diversity among the background players, but no new characters of note.

At the press conference with director Brad Bird, and producers Nicole Grindle and John Walker, I voiced my concern that, though diversity wasn’t talked about much around the time of the first Incredibles, it is something people talk about a great deal now, and that the footage I saw didn’t seem to have a very diverse character set.

Bird responded, “It’s in there, just not in the section that you saw,” but he insisted that story elements have little to do with societal expectations. He pointed out that there had been talk that Pixar had made the film Elastigirl-centric film because of the women’s movement in Hollywood, but that that wasn’t the case, because the idea had come to him immediately after finishing the first film.

“We don’t really respond to whatever the thing of the moment is, because our lead times are so long. We just kind of tell the stories we want to tell. But that said, you know, the first walk-around character in Disneyland that was Black was Frozone. So, you know, I think we’ve done okay.”

I countered that as a Black woman, it would be nice to see some of us up there. Bird said they have a few (I assume among the background characters), and admitted, “We wanted to show Honey in this movie, but we didn’t end up doing it because it’s funnier as a voice. So, we actually went through all of the trouble of designing the character and the design appears in the movie, but not as Frozone’s wife. We have used her design and she is a hero. There’s not a lot of screen time, though, on it.”

The filmakers insisted that they tried to get Honey’s story in there somewhere, but Pixar’s anxiety with the film’s length meant they couldn’t get everything they wanted in the picture, with Bird concluding, “So that’s our struggle.”

At the various sessions with Incredibles 2 creatives, I asked about Pixar’s efforts regarding inclusion on the creative side. In particular, the women creatives, especially those of color, pointed out that Pixar supported their efforts to interject their thoughts and ideas on upcoming projects. “We’re working on it, but it is important for us to be reminded that we still have work to do.”

Pixar veteran of twenty years, Shading Art Director Bryn Imagire has worked on many Pixar films, including Incredibles 2, and feels that her opinion is valued and listened to at the studio. She also takes her position as role model seriously, especially when on recruiting trips to art schools. “It’s really important for kids to become aware that there are jobs here at Pixar for them, and that they have every chance of getting to Pixar as I did. That [encouragement] has to start early. If you don’t have a role model it can be very hard to imagine yourself in that position.“

She continued, “I have a lot of friends who are teachers… so I’ll go to the schools and show the students projects that we’ve worked on like The Incredibles. Then they can see that, ‘Wow, this person looks like me, so maybe I can take this same path.’ Too many times this seems like it is an ivory tower, and it’s not really. Since I’ve been here a long time, I see progress being made. Baby steps, but all the right things are happening.

One of those things that happened was that Domee Shi, a Chinese-Canadian animator who started as an intern in 2011, just became the first woman in Pixar’s 32-year history to direct a Pixar short. Yes, that is definitely progress, and the future at Pixar is definitely looking more colorful.

By the way, one fun part of the event had attendees design our own Super. Of course, I made Honey like a true stan. I only had twenty minutes, so it was rough, but not bad. Behold, Honey the Bee.

I hope that we see Honey in the animated flesh someday. Maybe in Incredibles 3? Until then, her voice will have to suffice. In the meantime, Honey fans, make your voices loud and clear enough to be heard in Emeryville.