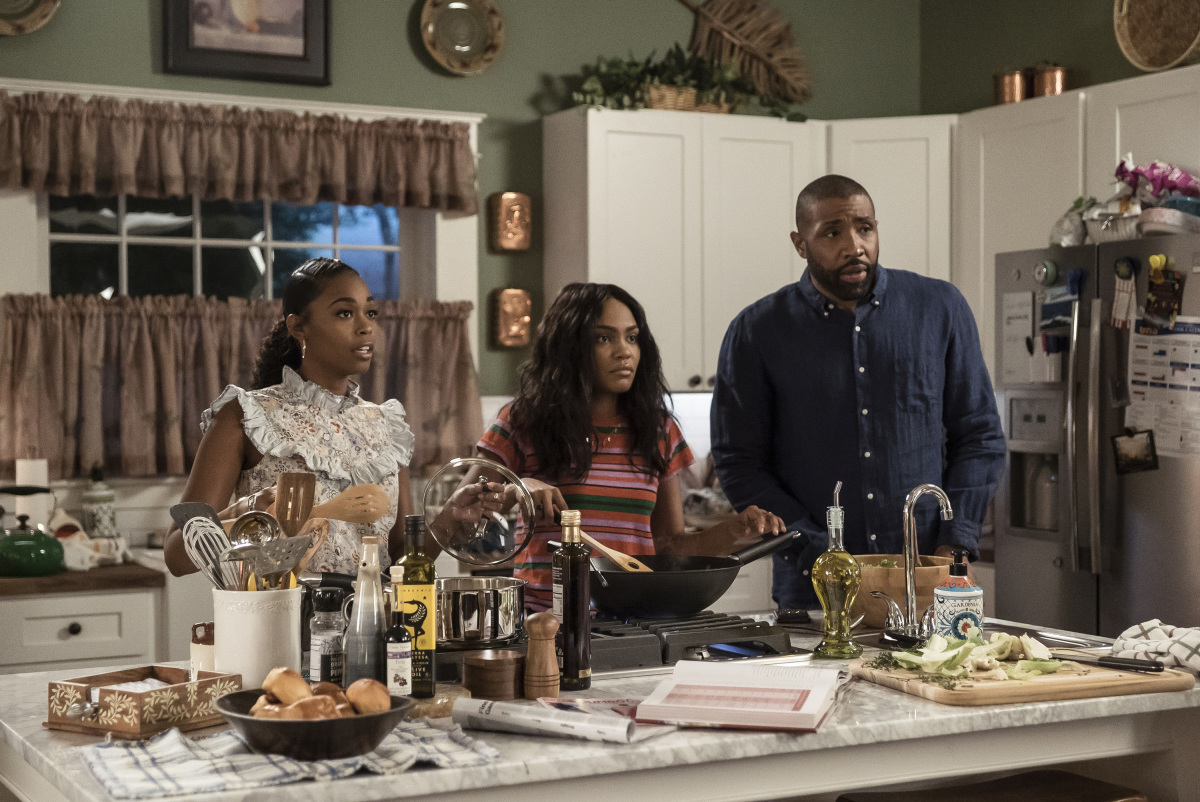 BGN recently had the opportunity to chat with the women of Black Lightning about season 2, while on a recent set visit. It is the ultimate dream of any talent or writer to be a part of a show where the executive producers and showrunners genuinely consider their talent’s perspectives, have diverse writing rooms, and create an atmosphere on set amongst the production crew that inspires the work of the talent involved. All of the women concur that what showrunners and executive producers Salim and Mara Brock-Akil are creating is of great magnitude. It is shifting paradigms and putting images on the television screen that are giving an open invitation to others to see things differently.

In season 2, Black Lightning fans will see transparent characters who do not always have it all together. Salim Akil and Mara Brock-Akil have come to the forefront of creating women who are strong and complex. As women acting in the Black Lightning series, they all express gratitude for being a part of something that allows them to tell well-informed and great stories.

Christine Adams (Lynn Pierce), Nafessa Williams (Anissa Pierce) and China Anne McClain (Jennifer Pierce) all unanimously agree that it is the magic that is happening in the writer’s room that affords them the opportunity to bring such real, transparent and relatable characters to life in a way that is influential and meaningful. They see the opportunity to showcase female characters who are strong physically and mentally, as a privilege.

Lynn Pierce is not just a mom who cares deeply for her daughters. She’s a well-respected medical researcher who is not afraid to do what needs to be done to protect her community and stand beside her daughters, yet she gets to be vulnerable and soft. Anissa Pierce is an extremely, intelligent part-time teacher who studies medicine, and is a proud lesbian. Jennifer Pierce is a smart, beautiful teenager who does not shy away from having a good time, and she’s refreshingly far from perfect.

The women of Black Lightning concur that telling authentic stories about people who are real, who matter, and that showcasing practical beauty makes a positive and powerful impact on women and young girls. Lastly, all of the women purport that working with creative teams that strive for and have a genuine passion for deeper cultural and human understanding has a great influence on the work that talent brings forth.

Adams, states that “I’m basically not wearing any makeup in my scenes, and that speaks to the authenticity of the show. You know, not everyone’s hair is always done.” The Pierce women are naturally beautiful, and the team wanted to showcase women who were not overly made up.

Adams stated that when she auditioned for the role she wore a wig because she just assumed that’s what they would have wanted. “So, I got the job. Went in the first day with real, cropped short hair. Salim was like…that’s what we want!” Adams states that many will still come up to her, and talk with her about her natural hair and what it means to them. “The impact has been huge”. Adams boldly asserts that being given that space to look and feel as real as possible makes the narrative so much richer.

China Anne McClain who plays the youngest Pierce daughter is reluctant to embrace her talents. She says of her character that she’s glad that Jennifer is reluctant because it gives her character more of an arc. Oftentimes, we see images where the character easily submits to the obligation or responsibility that comes along with a gift or talent. The beautiful thing about Jennifer in season 2 of Black Lightning is that her struggle is showcased. We get to see the painful and uncomfortable journey of a real teenage girl who just wants to live her life and have fun. This makes for a more realistic story, and this type of narrative is just as authentic.

Not everyone has a smooth transition when embracing new things, experiences or gifts. Jennifer’s narrative explores this difficulty in a manner that is necessary is real and relatable for those who may be struggling in this area. McClain states, “Thunder is like the complete opposite. She accepts the obligation. She loves that she has superpowers, and I like that Jennifer is the complete opposite side of the coin.” It shows that sisters can grow and develop differently, and still support one another. “Thank God that we have people like the Akils’ running our show because they let us have a say in our characters. If the way something is written doesn’t feel right, they let us change it or have input. And, I love that.”

In Black Lightning, the women have such a strong voice. As Anissa Pierce, Williams is wholeheartedly embracing her opportunity to tell stories that matter to communities that are often marginalized. While we had the opportunity to see Anissa embrace her superpowers in season 1, in season 2 be prepared to see a more mature superhero who doesn’t need validation.

On playing an intelligent teacher and med student who happens to be a lesbian Williams states, “I believe as a Black woman, and as a Black woman in this industry wanting to see more of myself and more of my people…lesbians and gay, LGBTQ people are no different. Those stories need to be told. So, I could care less if somebody judges me, or what people think of me telling this story…I am an artist, and I want to tell all stories.”

When asked about feminism, Williams made it clear that she feels women are to support one another.  She feels that women should not compete like they have been conditioned to do in the past, but rather “Support each other and love on each other a little bit more. We’ll get there quicker, together.”

On what makes this role different from any other role that she has played, Williams proudly declares, “Black little girls are seeing superheroes who look like them, with cornrows! I feel like I am walking in my purpose.” All of the women that BGN chat with on the set visit shared this same sentiment.

Season two of Black Lightning airs at 9 PM EST on the CW.