Kimberly Jesicka is a woman who is making strides in the world of animation and network television, she has made it her mission to create a space in media where children of colour will be able to see characters who look and sound like them. Her network KidPireTV will feature its first animated series based on the book series Beautiful Danger. Kimberly is not only creating her own network work but has also designed her first line of dolls called the Kimy Doll. It is her hope that KidPire TV becomes a platform that inspires as much as it entertains. 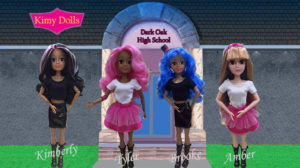 Kimberly, can you tell me how you made the transition from family therapist to interviewing celebrities on the red carpet?

I was living a double life.  Between 1995 and ‘ 96 I became involved in the media world. After some time left it, went to law school while receiving my masters in education and became a family therapist, working predominately with black families. I still dabbled in media a little bit and was still being contacted from various shows for looking for talent to make guest appearances. Eventually, I started to send people to appear on major talk shows such The Tyra Banks Show and other morning shows. At times, I even went on the show myself, as I was working as a teacher.

After I retired from teaching and family therapy in 2008, I moved back to California and started working in media full-time. I wrote for magazines like Vogue Italy, Huffington Post, and Elite Daily; working on the red carpet for the Teen Choice Awards. The first step to getting into media and working can start from just having writing samples, or starting your own blog, and can show that you are able to reach out to celebrities, that’s how I did it. I started reaching out to celebrities thirty years ago and interviewing them for my blog. I created my brand, I ordered a backdrop from online, I had my own logo and pink carpet. Eventually, I started getting calls to do interviews at red carpet events.

What made you decide to take the huge chance on starting your own animated TV network, especially one where children of colour are your target audience?

I went to many networks with my concepts and ideas, and after being told no repeatedly, I decided that if they weren’t going to give me a seat at the table, I would create my own. Instead of waiting for someone to accept my ideas, why not just create my own KidPire TV Network, launch it on Roku TV, create my own app and launch it on various services such as Roku and Google TV, which I did before approaching cable companies about providing me with a slot.

There are so many spaces like the reality TV shows, there’s OWN, Centric TV and TV One, but there is nothing for Black or Hispanic animation, or in the animation world that targets them specifically. There is no one in that space that looks like us, so I created one for us.
Eventually, when we receive funding for production, I can use comic books that are reviewed on sites like BlackGirlNerds.com and reach out to the independent creators to have them shown KPTV Network. That’s the direction I’m going.

As someone who has a professional background working with special needs children, what are your plans to make them feel communicated to and included in the narrative of the programs shown on KidPire?

What makes our network a little bit different, is that we are going to be reaching out to kids, allowing them to be the voice-over actors and actresses in our projects. Their voices will get to be heard. A lot of the animation will feature story lines with situations where for instance a girl is being bullied but she has a superpower and if they took the time to get to know here, they would see that she has the power to change the world. It’s about taking children who are downtrodden, treated as outcasts, are made fun of at school by the “mean girl” and making them the star, the superhero.

How do you go about curating shows that will send positive messages of representation and empowerment to children?

At the moment we have five original properties that are ready for broadcasting once the network is ready to launch, and once we receive funding, we will be reaching out to different comic book writers, particularly female writers. This is to ensure we reach out to different children from across the diasporas. At the end of the day, we all want the same things which is to be loved, accepted, respected and appreciated. We’re creating content with very real issues. Issues that teenage and little girls deal with such as skin color, their hair, clothes, where they grow up, and our message is just to teach them that anything is possible. That their dreams can come true. We want to instill in them that anything they want can come to reality, and what will bring this message home to them is that our programs will provide dialogue be in both English and Spanish.

Over the last few years, there has been a growing movement to see people of not only different races but also cultures and ethnicities, to be represented in media. As an Afro-Latina, have you noticed a dearth in media of people who identify as such, and how do you plan to tackle this with the shows broadcasted on KPTV?

It is my goal to show true representations Afro-Latinas and Latinas. My friends and family are from all over Latin America, from Puerto Rico, Santo Domingo, Colombia; they are a part of my life. They will be the authenticity of the characters. I will be using the voices of people, actors, and singers who represent the images we see on the screen. I am going o be true to the character.

Kimberly’s TV Network can be seen on ROKU, Amazon Prime Video, and Cable TV Network and you can listen to her radio show which is available on iHeart Radio.

Carolyn Hinds: A Bajan nerd living in Toronto, I am a major fan of Jane Austen and enjoy speculating on plot theories for my favorite TV shows, such as The Walking Dead, The Expanse, and blackish. I will do karaoke anytime, anywhere.do