I beseech anyone reading this review to avoid the trailer for Get Out at all costs. It’s not just because of spoilers – although it is overridden with them – but mainly because it doesn’t trust its story in the same way that the finished product on the screen does. The same could be said for most any modern film trailer, to be sure, but this one is conspicuously damaging. Let the prominently circulated, disconcerting image of Daniel Kaluuya frozen with tears streaming down his face be sufficient entreaty on its own.

Jordan Peele’s directorial debut never feels tiresomely sequenced or insecure, delaying its rewards and developments with grace and patience. As you waver in its loathsome, slightly surreal but relatable atmosphere, you’ll sit adjacent to affectingly casual racism, your composure breaking down, your responses discombobulated. A popular reference I’ve seen pointed out is Guess Who’s Coming to Dinner (1967), though I would update its mention by acknowledging The Dinner Game (1998) in the same breath. No further deep spoilers, let’s try and leave it at that.

The movie works dutifully to earn your trust, sparingly doling out its jump-scares. The very first one occurs on an upstate road when Chris’ (Kaluuya) sardonically playful girlfriend Rose (Allison Williams) crashes into Chekhov’s deer. The two are okay but shaken. A police officer requests to see Chris’ license because of Black man, but it is she who insists that the officer has no legal authority to do so since she’s the driver. This single scene probably takes up less than three minutes, yet communicates so much about the little we know of these two characters. Chris is agreeable, nervous, annoyed but sarcastically formal, well-experienced with the imbalances of the system and inclined to tactics of self-preservation on this completely unpopulated stretch of rural road, where following descriptions of the event would’ve been weighed in melanin. Rose is bold and incensed, rambling indignantly of American rights to the officer’s squinting but enfeebled disdain. I’m reminded of the Dave Chappelle bit about his stoned white friend asking a police officer for directions; this propensity for fearless outrage, expression, and insouciant questioning being the highways where white folk routinely drive past the speed limit. 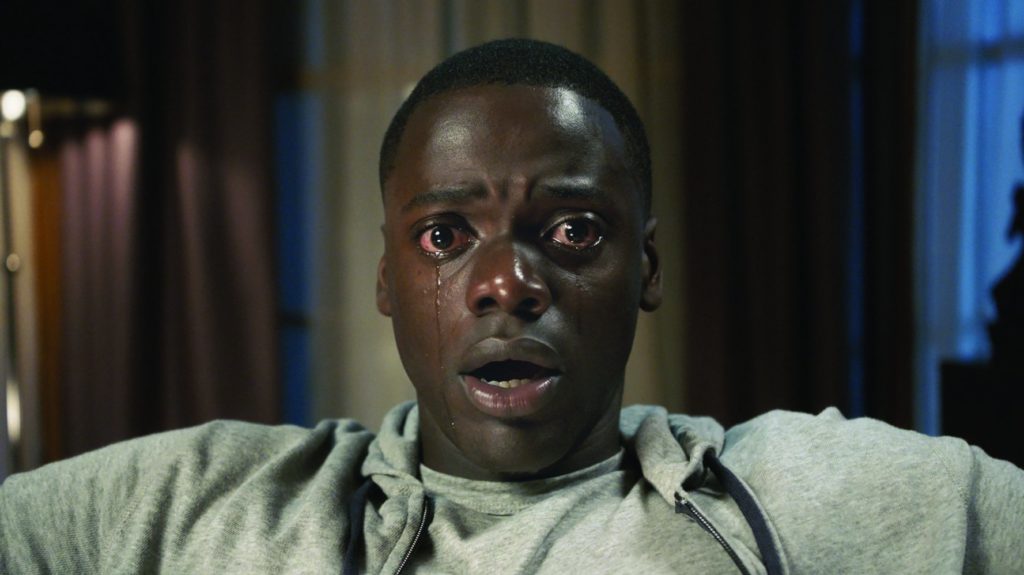 The two are traveling to Rose’s parents’ palatial upstate home for an intimate get-together and introduction. Once on the grounds, we notice some shrewdly identified exhibits of the Black experience (and I’m not referring to art from the African continent). If we look out to our right, we’ll find The Only Other Black Person Nod, The Not-Quite-Impolite Hesitation To Physical Affection From A White Stranger, The Practiced Tolerance Of Covertly Racist Statements, among others. These are keenly realized in the film, but matched alongside what we know to expect. Which is to say, we are aware that this is a horror movie, and while all this material has been used to bolster narratives in some horror films that we may be familiar with, there’s a little too much of it here. That makes us think it’s going to get ugly, even if we’re not exactly sure how.

Peele’s film arouses its payoffs within this strange frontier. I will admit that as a part of the horror genre, Get Out is fairly reserved with its gore, very reserved in the time it takes for the final pins to drop, and manipulates a smorgasbord of every manner of nervous laugh I might have thought possible, wrung from its actors as well as the theater audience. Kaluuya maintains a litany of silent, relatable, carefully realized stares, glares, and gazes throughout the film, often his only riposte to ignorance or outright malice. How else might you respond to your partner’s father’s tone-deaf (or prescient) remark that it’s “such a privilege to experience another person’s culture”?

The fact that Lakeith Stanfield is featured in a strong but minimal role is not the film’s only callback to FX’s Atlanta; Get Out is the bloodied, warped-mirror reflection of a particular episode of last year’s uncompromising series. I’m speaking of “Juneteenth,” where Earn (Donald Glover) visits a mansion party on behalf of his partner, spending an inordinate amount of time in the company of a poetry-spewing, African-art-loving white male plutocrat. In that episode, the discomfort is convoluted by the presence of the Black bourgeoise (including said plutocrat’s wife), certainly, but still emphasized and narrated in Glover’s body-language and struggle to keep a lid on his fury. The stakes in this film might be more severe, but some notes are comparable.

Again, bear with me and the caginess I’m employing, because I’m doing my best to avoid revealing any morsels that might hamper your experience. In Get Out, Chris constantly tries to loosen the valves of his quite reasonable anger and confusion by confessing them to his confidantes. And, eventually, this series of confessions are reframed during the magnificently hair-raising revelatory scene. The greatness of this moment is not granted because the audience can’t fathom any betrayal – it feels perfectly on-time, like much of the film – but because it functions as a rewarding release. In a peculiar way, this also disentangles the film from the relentless nausea it otherwise burns for fuel, trading it in for new revelations, and hastening its third act.

This nausea is regularly scrambled by the film’s humor, often through Chris’ best friend and lifeline Rod (LilRel Howery). That humor itself is further set into relief by the awkwardness and danger of the environment and, more specifically, the inscrutable intentions of the white people in it. I’m reminded of the oft-referenced “Hitchcock bomb theory” description of suspense vs. surprise, yet I’m challenged to think of a modern horror example that wields racism so mercilessly to these ends; it’s almost as if the bomb is visible under the table, but the conversation being had regards racial segregation in major league baseball. All of which leads me to another consideration: how much are these payoffs dependent on the film’s audience? Or, furthermore: how much are they dependent on one’s appraisal of an unhinged upper-class white man wielding a lacrosse stick who won’t move out of your way as an inherently disturbing vision?

I’m wondering if these qualifications make the film sound like a pessimistic exercise, but in the wake of the still-burgeoning “torture-porn” horror genre, I’d say that Get Out renders the opposite of desensitization.  Regardless, the supporting cast is so startlingly aligned with Peele & co.’s goals that the resultant work feels like a carefully written essay detailing micro-aggressions. I’m especially fond of Catherine Keener’s disorientingly enigmatic performance, and whose puzzling motivations are communicated – much like Chris’ fear, confusion, and disappointment – primarily with her eyes. To say anything about the supporting characters of color would, again, unnecessarily spoil parts of the experience, but Kaluuya remains the absolute standout star, anchoring each act with a growing dread, hidden by increasingly grueling masks of nonchalance.

Some might want to draw comparisons to 2012’s The Cabin In The Woods and its metatextual exploration of horror tropes (as well as the inclusion of actor Bradley Whitford, excellent and unnervingly casual in both films), but I argue that the “meta” aspects of Get Out refer less to horror and more to social constructs. In this way, I’m motivated to compare it to Iranian film Under The Shadow (2016), in the sense that it utilizes the frustratingly persistent norms of its national identity to recontextualize the more recognizable elements of the genre. That isn’t meant to be a statement that erases horror’s historical relationship to Blackness – I would defer to Graveyard Shift Sisters for omnipresent commentary on this subject – but I find this type of experience rewarding and rarely so undisguised in a wide-release movie. Get Out is assured, popcorn-accessible yet provocative, with scenes that will make some audience members squirm while others laugh. Hopefully, they all discuss it after the show.