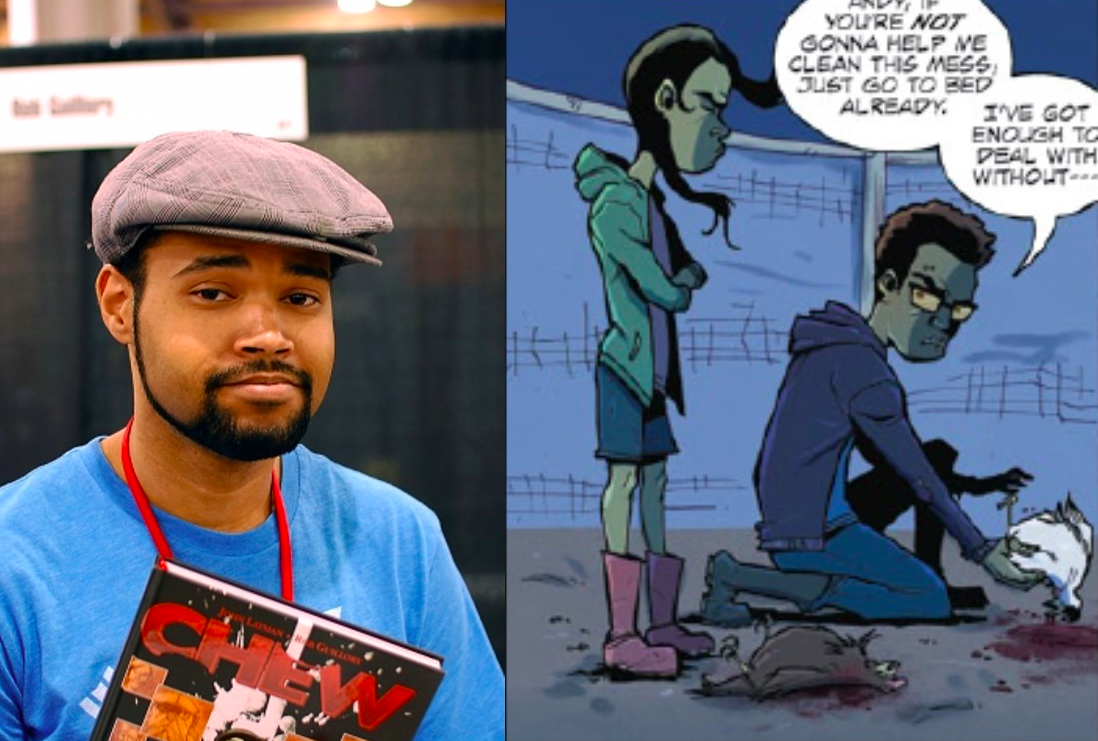 From Image Comics, Rob Guillory — the artist who made you want to eat chicken — has branched out on his own to draw and write the upcoming title Farmhand.  It seems more and more that the cycle of life continues to pull you back home.  As we are living longer (no thanks to Obamacare –just kidding), the decision point often arrives where either we need to, hopefully for a defined period, move back in with our parents or more often move them in with us.  Some outstay their childhood and really need to move out.  Often when we have been absent from our parents living our best most authentic life, our homecoming can shed light on changes.  In the best of cases, we see that our absence has allowed them to develop a life not centered around caring for us.  In the other cases, the reality kicks you in the teeth that your weekly call should have included a few more visits. Farmhand is a good read, as it allows the reader to go along with Ezekiel Jenkins and his family as they explore what is going on at the family farm, and the implications of that on their future well-being. 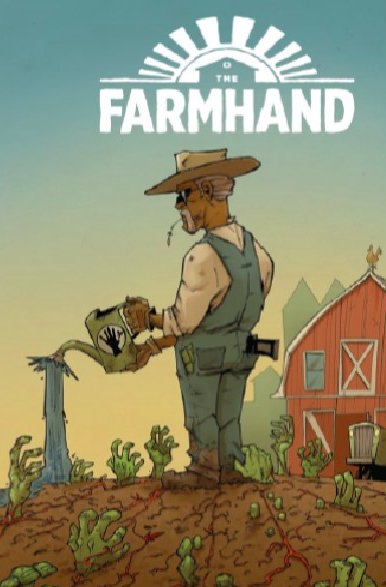 Given the cover, the plot is intentionally macabre, but it is laid out through a strong story, threaded with good humor, accompanied with great pencils.  While the element of mystery moves the story along, I found myself analyzing each panel for the “Easter eggs” Rob has placed throughout in almost every sign.  One of the panels has a sign on the bathroom door that states “Wash Yo Stank Hands.”  BGN had the opportunity to ask the creator a few questions:

BGN: The cover makes the title seem appropriate, but given the real origin of the Jenkin’s Farm why not Farmer’s Thumb?  Does the title preview what is to come?

Rob Guillory: Not bad. I thought Farmhand was simple, sort of catchy and sort of punny in the right way. But yeah, there’s more to the name that will be revealed in due time.

BGN: Farmhand seems to be an opportunity to make a statement regarding the ethics or lack thereof around scientific advancement.  There is a panel where one of the “farmers” is looking over a bed of eyeballs.  On his tack board is written “Analysis.  WTF Science.” Do you feel that there should be limitations placed on scientific discovery?

RG: I don’t really know how you can put the genie back in the bottle, regarding limiting scientific exploration, but yeah, I’m always asking “Is this a good idea?” when it comes to certain areas scientists tend to poke around. I recall a few years back, reading about some research team set out to create a “Zombie virus”, and I immediately thought “WHY would you do that?” I’m not making a judgment either way, just asking the question. Personally, I always think about Ian Malcolm from Jurassic Park saying “You were so fascinated with what you could do that you never stopped to ask if you should do it”. That was true in Jurassic Park, as it was in stories like Frankenstein. And it’s something I explore in Farmhand.

BGN: I thoroughly enjoyed many of the Easter eggs throughout the book prevalent in the signage, especially the name of the seafood restaurant.  How much of Rob is in this title?

RG: There’s more of me in this book than anything I’ve ever made. It’s not an autobiography at all, but there’s a lot from my life and my history that I’m pulling from. Even the town, Freetown, is a real place in Lafayette, Louisiana where I live.

BGN: Ezekiel and his family learn the history of the farm during the tractor tour, but his sister’s role in its success was not explored. The father has the “green thumb” of the family, what is her story?

RG: Oh, Andrea’s probably my favorite character. I didn’t get to dig into her story in issue 1, since the issue was already super-dense as it was, but we get an in-depth look at her story in issue 4. There’s a lot more to her than meets the eye, and she’s a huge part of the story. 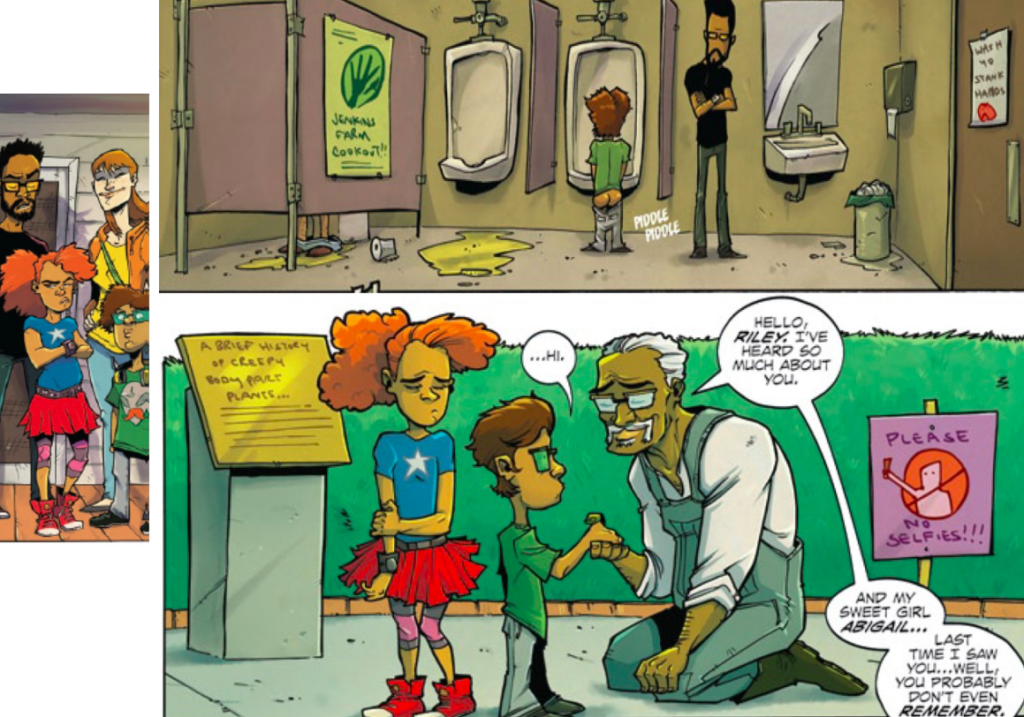 BGN: So in the first few panels, there is violence against chickens.  Given your past Eisner award-winning work, do you have some issue related to chickens that should be better explored?

RG: (laughs) It seemed like an appropriate transition for me, after eight years of drawing chickens. That was a deliberate nod to Chew, yes.

BGN: With Chew, your storytelling was through the art infusing your vision with John Layman’s writing.  With Farmhand you have the responsibility for both the writing and the art, has the added role affected your way of storytelling?

RG: Well, it’s definitely required a deeper understanding of what this story is. With Chew, I was always working off writer John Layman’s lead, so while I “got” the world of Chew, there was always a bit of mystery to it because Chew lived in Layman’s head more than mine. With Farmhand, it’s all me, so I’m sort of discovering this world from both angles, first as a writer, then as an artist. So making this book has been a lot more involved and deliberately paced than Chew was. It’s taking me longer to make it, but it’s feeling like a richer storytelling experience. 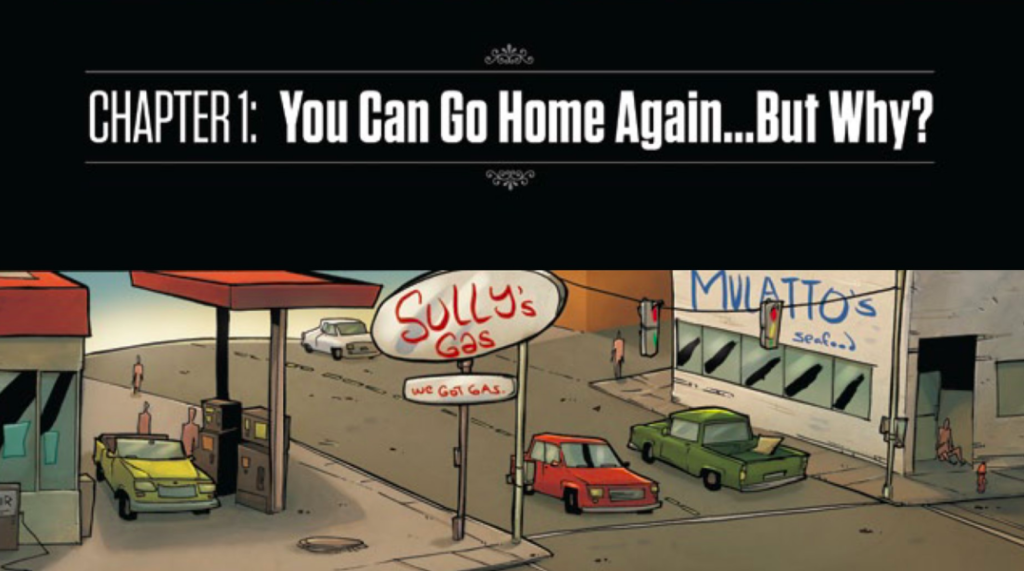 Farmhand reads and more importantly feels like a well-written version of the game Plants Vs Zombies, but the twist is that for some reason the homeowner is planting the zombies and you are the one trying to get into the house.  Despite the fact that the cover has a farmer watering zombie-like hands, Farmhand, at least the first issue, is appropriate for our younger readers who have stepped into the joy of chapter books.  So join BGN as we add this one to our pull list for July!