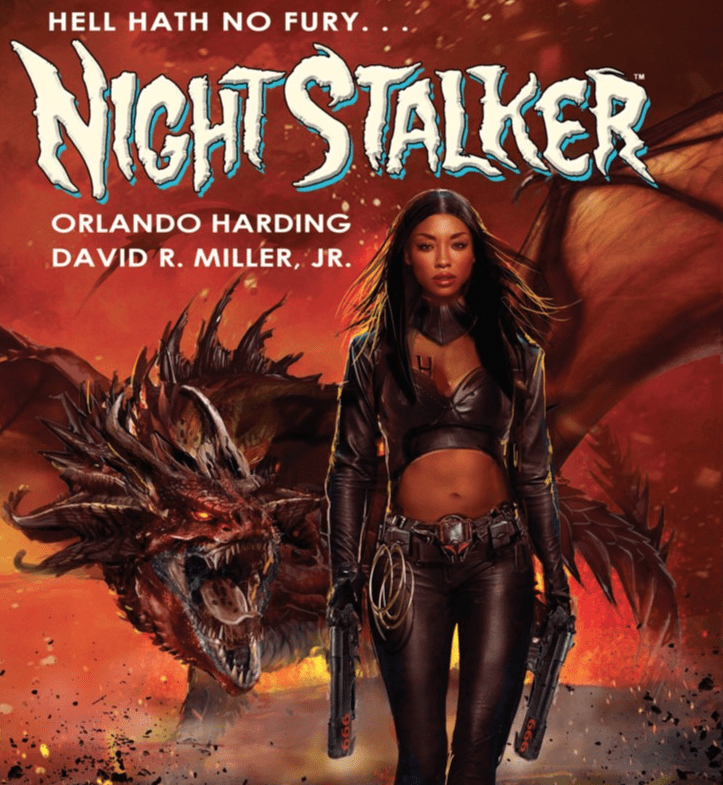 The horror genre has requirements that include gore and some incarnation. Other common themes include the campy shrieking bystander or the feigned surprise of a potential victim, then there is the gore for gore’s sake, and don’t forget the demon fighting half-dressed women. The most recent offering from 1First Comics has it all. Night Stalker ekes from the mind of Orlando Harding and oozes past the pen of David Miller, Jr.

The story begins at the middle with the punishment of the demon hunter Dyana and works its way to a strange cold war between the hosts of Heaven. Both are seeking to capture Dyana, who has chosen to move against her nature. The story takes you on journeys through time in combination with a series of flashbacks to provide the context for Dyana’s betrayal of her role in the balance between good and evil.

Harding’s addition to the denizens of evil travels from the current to the time of slavery with a stop in the 1980s for good measure. The constant battles allow for very little dialogue other than some witty, demon-focused retorts and some cryptic vermin-infested brunch meetings. But what narrative does occur is peppered with culturally influenced quips in the time jumps, which also allows for a sequence of panels of jive talking that is painful both for Dyana and the reader.

Miller and the other graphic artists dominate the story with broad lines and strong, bold colors, which animate the numerous battle scenes. The representation of Dyana does suffer from the small waisted, big breasts, very little clothing that tends to dominate many horror titles. Initially there was hope that the costume choices were window-dressing for an engaging story. We have seen this kind of baiting with many titles. Michael Turner’s Witchblade comes to mind. However, instead of supporting the choice with a strong back story, Harding attempts to justify the fashion choices by adding profiles of the demons Dyana is sent to hunt and their likes and dislikes. This forms a basis for the pigtail, red halter, and Daisy Duke ensemble in the first few pages. Naturally Dyana and her friend Michelle graduate to long coats and skin tight clothing towards the end in an obvious tribute to Trinity from the Wachowski’s Matrix trilogy. Go figure, they probably got cold.

All in all, Night Stalker is a decent entry into the horror comic world. The title has all the essentials to fashion an adolescent male’s fantasy world, combined with an uncomplicated story with a lot of demons to entertain for a time. The ending clearly leaves the door open for the predictable chase of Dyana through the depths of hell and time. However, there is an opportunity to move Dyana forward in a more substantial way. Harding’s creation hints of a realm with great depths to explore, and, combined with the artistic talent of Miller, a great work could be made manifest. Only time will tell if Harding and Miller choose to maximize their talents and elevate Dyana from a demon-fighting pinup to a mythic anti-hero.