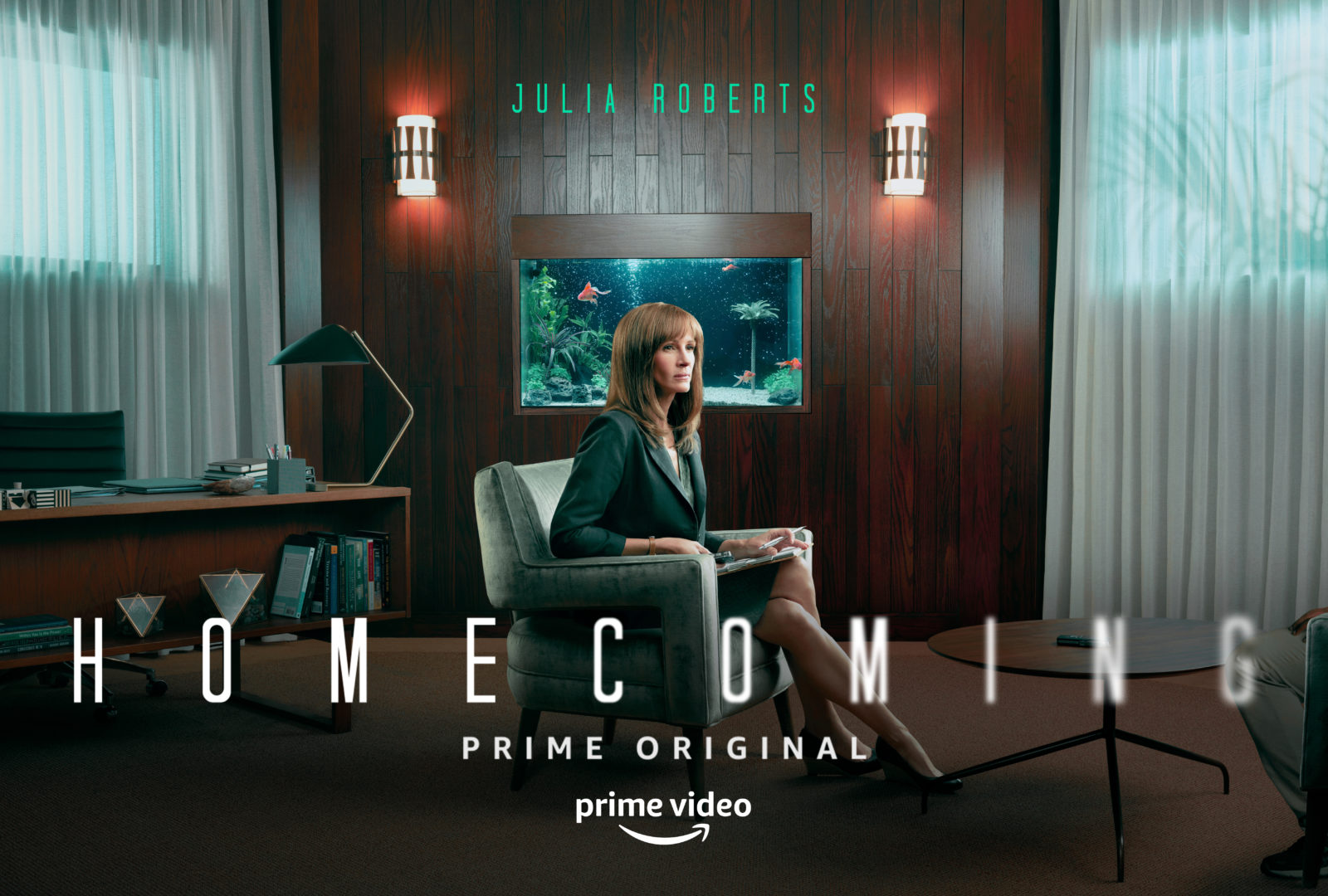 TV showrunner and writer extraordinaire Sam Esmail — who is the genius behind the hit Universal Cable Productions series Mr. Robot is back again to electrify fans with his latest thriller Homecoming.

The Amazon series presents us with some familiar territory. Homecoming is based on a podcast of the same name by Gimlet Media. The critically-acclaimed podcast was created by Eli Horowitz and Micah Bloomberg. Sam Esmail sits in the director’s chair of the episodic series and if you know anything about his work in the psychological thriller Mr. Robot (which sadly will end its fourth season), be prepared to experience all that and more in Homecoming.

The pilot episode (“Mandatory”) plays out exactly the way the podcast series did, where we meet Heidi Bergman (Julia Roberts) who is a caseworker at the Homecoming Transitional Support Center.  It is an institution, that helps soldiers returning from war and in most cases — dealing with post-traumatic stress. However, we slowly uncover that this facility is not what it’s cracked up to be and its staff harbors a number of secrets about its activities. 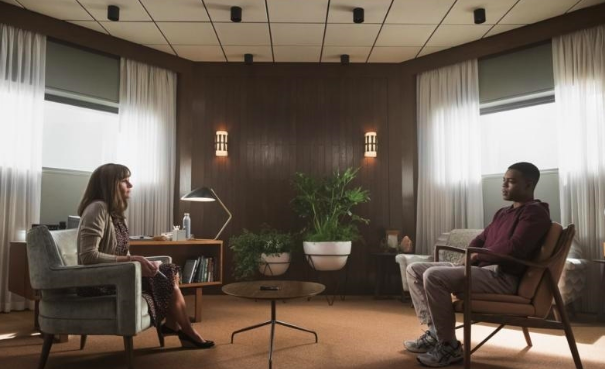 When we first meet Heidi she’s sitting in her office and directly across from her is Walter Cruz (Stephan James), who meticulously observes his surroundings. He immediately mentions the fish tank in Heidi’s office, which she inherited from the previous caseworker who started before her.  This is an important callout in the pilot because the fish tank in the podcast was also a plot point for the story.

The sound of an air pump pulsating in a fish tank is exactly the kind of auditory cues used in the podcast version of Homecoming, which is utilized to add more texture to the scene’s surroundings. It has been a while since I’ve listened to season one of the podcast, but I’m almost certain some of the dialogue used from the original podcast script was adapted in the TV series as well. 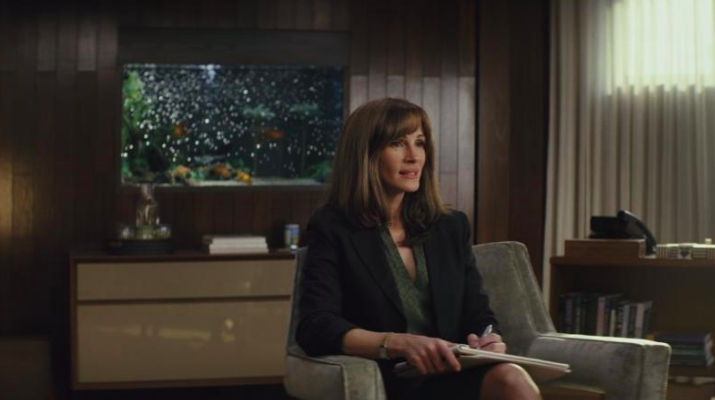 In a move of perfect casting, Emmy-winner Bobby Cannavale plays the role of Colin Belfast — the often distracted and haphazard boss of Heidi’s who keeps her on a short leash. The podcast version was originally voiced by actor David Schwimmer and Colin is one of my favorite characters from the podcast.

Homecoming brings a heavyweight all-star cast and it is no surprise that the show was able to attract so many veteran actors because of Julia Roberts’ attachment to the series. In her first TV acting role, she also serves as an executive producer under her company Red Om Films.

Heidi’s on-again-off-again boyfriend Anthony is played by actor Dermot Mulroney. The irony is not lost on me that Mulroney plays the love interest of Heidi, who in the podcast was voiced by his ex-wife actress Catherine Keener.

Alex Karpovsky plays the facility’s life-skills coach, Craig and Oscar-nominated actress Marianne Jean-Baptiste (who is appearing in a film at TIFF called In Fabric) plays the role of Walter’s mother Gloria. Jeremy Allen White who you may know from Showtime’s Shameless plays Shrier a paranoid soldier who suspects some foul play occurring in the facility. In the episode “Pineapple” Shrier is suspicious and confesses to Walter that he doesn’t believe they’re in Florida, the location of the military program. Walter believes because there are palm trees it’s likely, but Shrier has major doubts. He begins to freak out in the cafeteria over his plate filled with a stack of pineapple wedges. 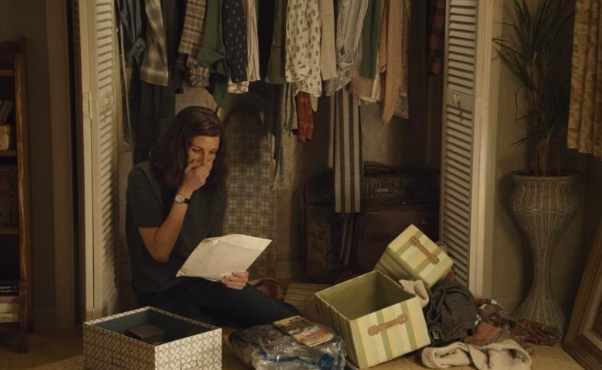 The series additionally explores the relationship between Heidi and her mother Ellen (Sissy Spacek) whom Heidi lives with, in their small rural town. Heidi leaves her position over at Homecoming to become a waitress pretending the past never happened, but it swiftly comes back to haunt her when a Department of Defense auditor by the name of Thomas Carrasco start asking questions about assault cases against the soldiers at Homecoming.

And he’s curious about why she left.

Each of the episodes of Homecoming are a quick 30 minutes and if you are familiar with Mr. Robot, you may see some parallels between how the opening and closing credits are framed. Esmail produced this series through Universal Cable Productions along with executive producer Chad Hamilton of Anonymous Content — the same team behind Mr. Robot.  The music in this episodic series plays a significant role as well. In one of the episodes, ominous music is heard as Thomas Carrasco enters the office building to interrogate Colin Belfast. It’s the musical score to Stephen King’s Carrie, which took me a moment to figure out and then after realizing it, wishing Sissy Spacek was in the scene instead.

The only concerns I have with Homecoming is how the series will resonate with viewers who have never heard the podcast. The story delves a little too deep and doesn’t offer much context to the plot to allow the viewer to translate what is happening. So my concern is that although this was easy to comprehend while listening to episodes, will it communicate clearly with new viewers? There may also be some confusion in the phone conversation scenes between Heidi and Colin.  Normally, filmed phone conversations do not at all sound like real life phone conversations. Each party you hear speaking, sound as if you are in the room with them respectively. However, in Homecoming, the conversations are mirrored the same way they were produced on the podcast — it sounds as if you are listening in on an actual phone call. And although this is normally the way a filmed phone conversation on TV should actually sound, ironically it does not. And this could be jarring to an unsuspecting viewer wondering why the audio is cut this way.

Aside from those minor concerns, Homecoming is just as compelling as its podcast and delivers the same kind of intense drama and incredibly well-executed performances. Stephan James and Julia Roberts’ chemistry is palpable and both do an incredible job of filling Catherine Keener and Oscar Isaac’s shoes.

All episodes are directed by Sam Esmail