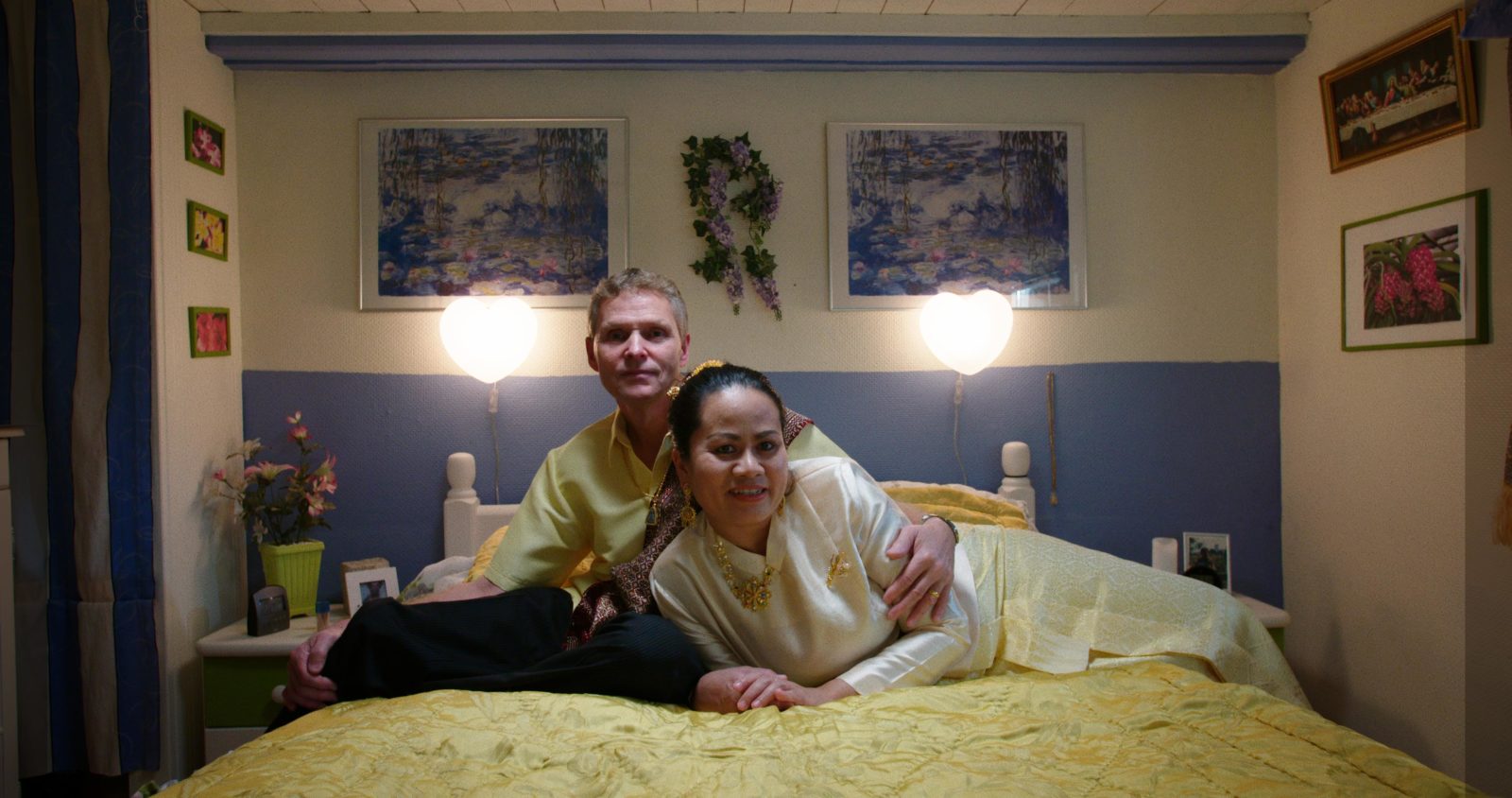 A small fishing village in Denmark named Thy has a rather strange claim to fame: there are more than 900 Thai women who have married Danish men, forging an entirely new community the likes of which the area has never seen before. This trend began in 1993—when Sommai met Niels in Thailand’s Pattaya beach, an area notorious for its booming sex tourism industry. As a sex worker herself, Sommai’s Pretty Woman fairy tale came true when Niels fell in love with her, brought her back to Denmark, and married her. Over the course of their 25-year-long marriage, Sommai helped arrange marriages for hundreds of Danish men, which also helped the women find their way out of sex work and extreme poverty back in Thailand.

Directed by Janus Metz with anthropological research by Sine Plambech, Heartbound shadows several Thai-Danish partnerships over the course of a decade, as well as introduces us to members of their respective families and peers in Thailand. What alternates between a rather bizarre scenario of Western men appearing to prey on desperate Thai women and the women’s own power and agency in changing the course of their lives become a heartwrenching treatise on romance, love, and the chances people take to pull themselves and their families from extreme poverty.

Filmed in both Denmark and Thailand, the contrast between worlds couldn’t be starker. The clean grey streets of Thy, its tidy apartment complexes, and garden homes, compared to the gritty alleys of Pattaya and the rural villages where the Thai women grew up, sets a potentially problematic stage for Western men’s consumption of fetishized Asian women. But in Heartbound it’s rather more complicated than that.

Sommai will only help arrange marriages for Thai women 24 and older, and preferably those who have been married before. She isn’t plucking young girls from their homes and handing them over to predatory men. She carefully vets both woman and potential husband, making sure she is involved in every step of their decision to marry or not. And the men seem to be kind and grateful, not all of them elderly marrying young. Sommai takes on a protective role over her wards, and many of them call her “Aunty”.

Sommai left her own children behind in Thailand when she married Niels, and the film doesn’t tell us why they never joined her like many of the other women’s children eventually did. Whatever the reason, Sommai nurtures each potential partnership like a child and remains in the woman’s life after the marriage. There is so much compassion in Sommai. But the sadness in her eyes is overwhelming at times. 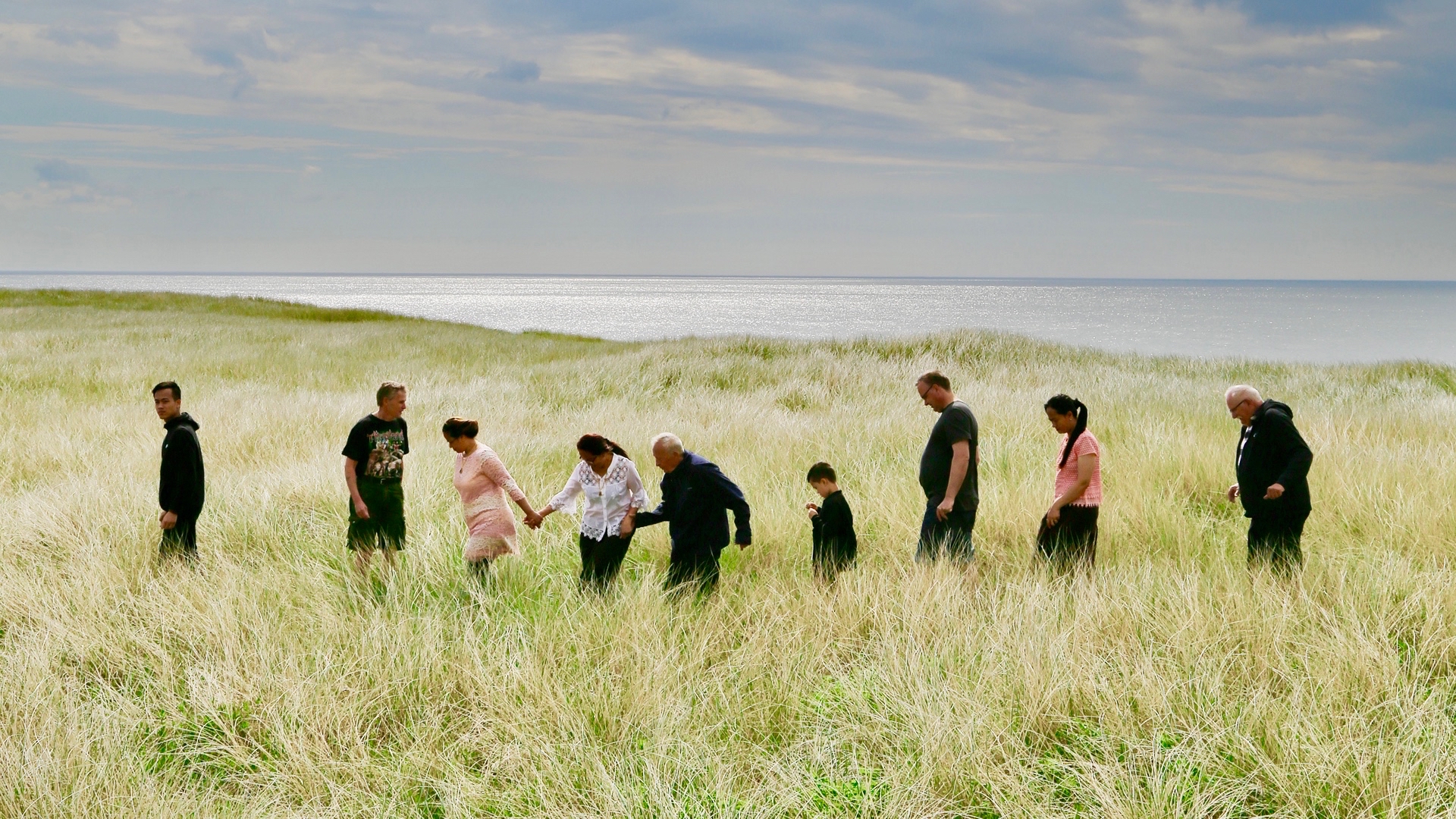 I couldn’t help but think of the migrant children at the border right now, hundreds of whom are still separated from their parents and rumors growing that many will never be reunited. Each of the Thai women we meet in Denmark had to choose to remain with their kids in extreme poverty, scraping by as sex or rice field workers, or move away for a time in order to provide a better future. Heartbreakingly, many women opt not to bring their older children over since they fear the adjustment to a new lifestyle and language would be too difficult. But this doesn’t stop the women from sending money home every chance they get, something that is often the make-or-break for their family’s survival in Thailand.

Because Danish law only allows permanent residency for foreign spouses after seven years of marriage, one way Sommai “sells” these partnerships is that if it doesn’t work out, it’ll only be seven years. We see the breakdown of one marriage in the film. Basit had been horrifically physically abused by her first husband back in Thailand. And when her new Danish husband started becoming more and more verbally abusive as their marriage went on, she decided to divorce him once she received her permanent residency. While it was an amicable enough divorce, the bottom line was that in Denmark even the divorce gave Basit options she never would have been afforded back home.

And because this film spans an entire decade, we have the privilege of seeing how these Thai-Danish lives evolve over time. One story was particularly poignant: Lom had been working in Pattaya since she was 14. At 22, she is still beautiful and youthful, but already cynical about sex and love. “Sex work is work,” she says, trying to burst the bubble of her idealistic friend Saeng. Was it something in her jaded demeanor that men sensed and kept them at a distance? Lom watches as her friends get lucky, meet white men, and move away.

Ten years later Lom looks years older than 32. She’s been forced to go back to her village and work in the rice fields as well as care for her ailing mother. She is stigmatized for having been a sex worker. She will probably never marry, which leaves her in a kind of social and cultural limbo. Lom’s Facetime sessions with Saeng, now married and living in Helsinki, are powerful. Saeng shows her around their perfectly middle-class apartment, so trim and proper. We see Lom in Thailand, lounging on a filthy mattress on the floor, the walls of her home crumbling, as she picks at the terrible acne on her face. Saeng’s skin and hair are flawless. They came from exactly the same village. Now they are universes apart.

These are strange love stories indeed, and often they point to the general difficulties of having a successful cross-cultural marriage. I found it odd that the Danish husbands never bothered learning Thai. It was stranger still that the Thai women seemed to have no Danish girlfriends, they only socialized in-group. Does this point to greater xenophobia in the area? And what was “wrong” with these men that they had to import a wife? It does make me curious about perceived the stereotypes and fetishism of Asian women as compliant and submissive. In many ways the women in this documentary did play that part, but only as far as to actually get married. Each of them have strong personalities—some, like Basit, stronger than others—and healthy sex drives. They might appear to fit a stereotype, but looking deeper they have far more personal agency than that.

Heartbound is a compelling story about the depths and lengths women will go to in order to get themselves and their families out of extreme poverty. And most of these women get it done against terrible odds. Eventually, their sacrifices shift into choices. I wonder if, in the end, that makes it all worth it.