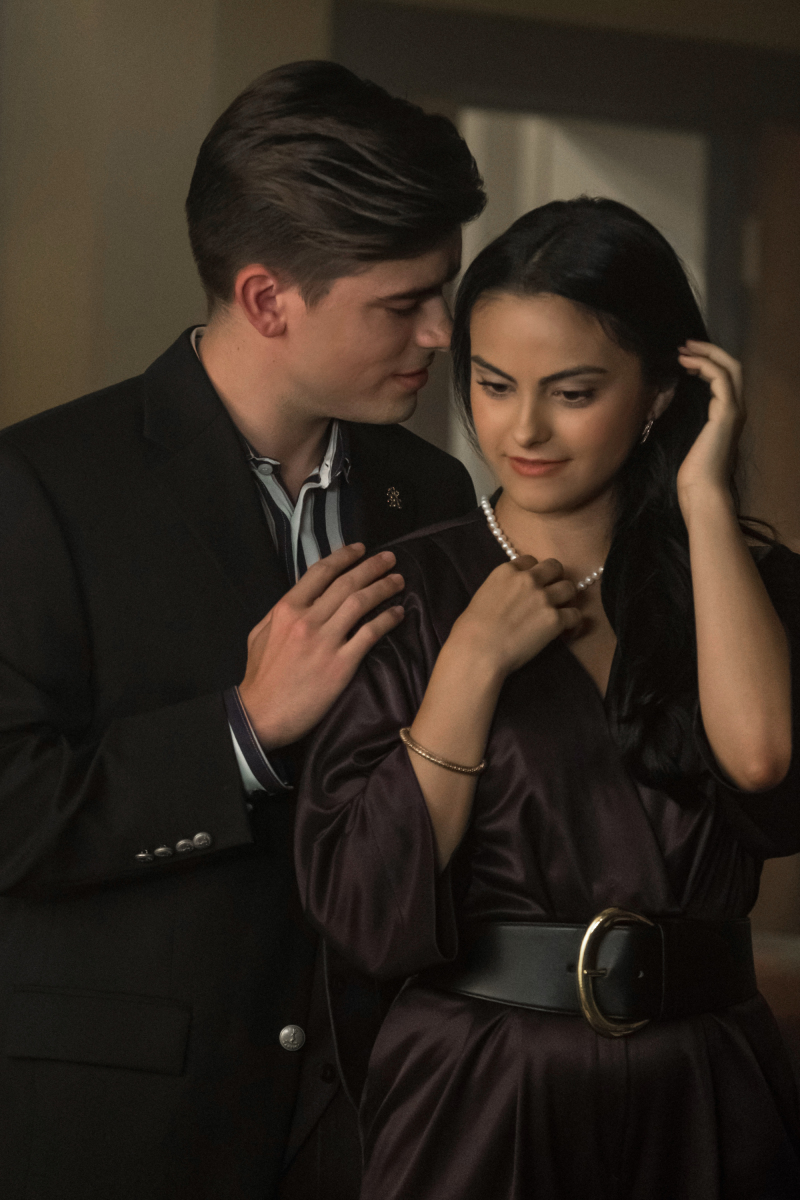 Last week, Bughead fans freaked out over a scripted kiss between Jughead and Ethel and sent threats to the actress. The scene is conspicuously missing from last week’s recap. I’m officially counting down the seasons until Barchie (ugh) becomes a thing. This week is finally, the much-vaunted flashback fan service episode! Bad Betty! Cheryl in braces! Archie with his real hair color! Josie with lines! This is the real Upside Down, folks.

When we last left off, despite the best efforts of Alice and FP, the Gryphons and Gargoyles literature has spread like wildfire, ending up in the hands of every student at Riverdale. Jughead monotonously narrates that while the adults are confiscating the G&G “scripture” which mysteriously keeps cropping up.

Bughead initially made overtures about the game’s childishness. Yet, all of a sudden, people can’t get enough of it. And it’s an escape from their daily lives. That’s suitable reasoning for playing it, I suppose. However, even for its real-world counterpart (assuming Riverdale takes place in some semblance of the real world, which I wonder at times), there are enough entertainment options that it doesn’t make sense that everyone would be playing it. Though, I guess, that’s the mystery of the game.

The G&G explosion leads Hermione to come to Riverdale High and give a speech to the kids, like they’re warning them about smack. I know there’s this mystical context to the game but the reality of what she is doing is so, unintentionally, hilarious.

Later, we find out Bughead are still paying off medical professionals for information. Betty confronts Alice with a medical report from Dr. Curdle. The report verifies Alice’s confession that she played G&G at Riverdale High. It also corroborates the info Betty has that someone died, and that individual had blue lips.

For some reason, Alice agrees to talk about it, which takes us back in time, straight into our much-vaunted Breakfast Club flashback. One question before we dive in. Will Riverdale be more like the 80’s in the past than the 2010s in the present? I’m going to go out on a limb and expect just as many anachronisms due to that “smells like teen spirit line.” Wrong decade writers!

Of course, to make things interesting, we not only have our cast playing their parents, but they are (mostly) playing against type. Alice claims she had enviable hair back in the day, but they could have committed more Aquanet to that wig.

Veronica and Cheryl take the award for best 80’s cosplay here. They are both adorable and lean into their characters with enthusiasm. Penelope’s braces are just a great touch. Of course, KJ Apa looks great without his Crimson No.8, but what is going on with his face? It’s like it’s been molded to look more like Luke Perry’s and it’s scary.

We get the backstory on the detention. Alice and Penelope start scrapping in the girl’s bathroom after Alice finds out that she’s preggers. Fred and FP get peer-pressured into streaking. This leads to the infamous detention. Even though the whole point of this flashback is to give clarity to the fairly dark role-playing games-causing-death storyline, we get a happy little Saved by the Bell-type title card this episode. It would be amusing if Zack Morris was narrating this mess instead.

It’s no surprise that some fit their alternate persona better than the others. I’m just saying that I can believe Jughead’s father as a lady’s man better than whatever Jughead is doing as Fred. He comes off as insipid and snotty as his progeny. Sorry, it ain’t happening. Judd Nelson, he is not.

Riverdale is one of the few CW shows without an ever-present soundtrack; so, this 80’s roll call of every recognizable tune ever is a bit distracting. It’s also edging the tone of this ever closer to the line of parody.

Also, I walk back what I said before. It’s not true that Sierra’s only trait is that she’s Black. She’s also in a Tragic Interracial Relationship with Kevin Keller’s father. This revelation shocks the group into an impromptu game of Secrets and Sins, where the actors can make tons of allusions to the current storyline. In the meantime, we can laugh at the disillusionment of their dreams and future misfortunes.

Everyone reveals a secret about themselves — Fred’s dad beats him, Hermione is seeing Hiram (who is starting his criminal career early), and Fred takes care of his sick dad. Penelope unloads, literally, the entire messed up Blossom family storyline, which seems a bit much to reveal to strangers. Perhaps it’s just a cry for help. Though despite the family child incest factory, Penelope still believes she’s better off than being a maid. Which kicks off another fight between her and Hermione.

Of course, despite the fights and differences of opinions, everyone becomes friends anyway.

One afternoon, Hermione breaks into the teacher’s drawer of confiscated items which includes a copy of, you guessed it, Gryphons and Gargoyles.

As the kids get into this game, G&G seems to foster a sense of community and creativity amongst them. Very opposed to the general impression here that we have to believe role-playing games are addictive and dangerous. Other than the whole drinking poison thing, the game seems to be a positive way of bringing the kids together.

Eventually, they become seasoned enough for some LARPING (live-action role-playing). Somehow, Penelope found time to set up an entire search-and-find mission. And, as if we needed more proof that Cheryl (and by extension, Cheryl’s mom) is awesome, she mixes up the pairings a bit when sending them out for the mission. Her explanation? “I guess I’m in the mood for a little chaos.” Yep, and it’s time for some fan service.

During the pairings, we get a little Barchie action, finally. My conspiracy theory is that through the flashbacks the writers are testing the waters. They’re mixing up the pairings a bit to see what fans will react to. Well, we know what Bugheads will say. Though I think the one thing I would likely ever agree with them is to scour the universe of all Veronica and Jughead ship teasing forever. Ew.

We move into what is the turning point of the club. Penelope reveals that they’ve got an invitation to some “Ascension” gathering in the detention room. It’s a real party, with cookies, and soda pop and chalices.

Hiram (Mark Consuelo’s son who sounds JUST LIKE HIM) smuggles in some Pop Ro — I’m sorry, fizzle rocks, another lame-o Riverdale drug. Though if they’re analogous to Pop Rocks, how can they be a drug? I’m clearly thinking too hard.

So, this is apparently when everything goes to pot. Everyone’s high on the rocks (except Alice since she was pregnant with Betty’s brother at the time). We get the psychedelic drugged-out menagerie of “kids on drugs” here, as everyone is just three sheets to the wind, save Alice. She gives the impression that she would’ve partaken were she not pregnant, but just like FP/Jughead, I’m getting the condescending vibes from Alice/Betty too. Especially, as she surveys the ensuing chaos around her.

We get a bonus musical number by the “Fred Heads” (aka KJ and Ashley). Penelope’s nerdy dancing is adorable. Also, if you’re paying attention, there’s a bonus shot of Hermione and Reggie’s dad making out (they’re dating in real life, geddit?).

Alice then kind of randomly runs into goathead dude and then leaves. The night after, everyone’s full of guilt, because Fred’s dad passed away that night, and Featherbee disappears.

The mystery about Featherbee doesn’t last for long, as the school is besieged by flies and a pungent smell, common indicators of a dead body. This is quickly apparent once the principal is discovered. His corpse falls out of a closet with blue lips. Other than Hermione making the sign of the cross, no one seems that traumatized at seeing a dead body or realizing they’ve been walking past a decomposing one for weeks.

Alice puts two and two together because there was blue liquid in the chalices. But for some reason, she thinks the others have motive for killing their own principal. Well, you can do some wild stuff while under the influence. The group all does a round robin of blaming one another for the principal’s death. Common sense reigns when it’s clear that whoever planned the Ascension, filled the chalices with poison and planned for someone to drink from them.

Alice wants to tell the police. The others decide that destroying the game will solve the problem of spontaneously appearing poison chalices. The pact is made and we’re back in the present day.

Of course, Betty is determined to play detective. Alice would rather she leave things be. However, rather reasonably, Betty stresses that the cat’s out of the bag now and more people have died like Featherbee.

She goes snooping to “verify her sources.” Betty finds the chalices where Alice said they would be, in the extraordinarily thoughtless hiding spot of the trophy case.

Betty goes to her and Jughead’s love bunker to tell him about Alice’s 80’s Breakfast Club Backstory but finds him engaged in a game of G&G instead. And uh, oh, it looks like it’s made him craaazy!

If the whole point of this storyline was to prove the dangerousness of G&G, I think it failed. Either the death was nothing but an accident, or Mr. Featherbee’s murder was planned by someone outside of the group that wanted something bad to happen to them. That still doesn’t implicate the game in and of itself.

Outside of Jughead, I think I actually preferred the young parent characters. And not just because of the personality swap. Even through the 80’s movie tropes, the actors seemed to act more authentically like teenagers. I would watch a whole series of those characters engaging in Gryphon’s and Gargoyles as we see them play out their individual quests. How about an internet series, Riverdale writer? I would watch that over whatever internal emo conflict Jughead is undergoing next week.