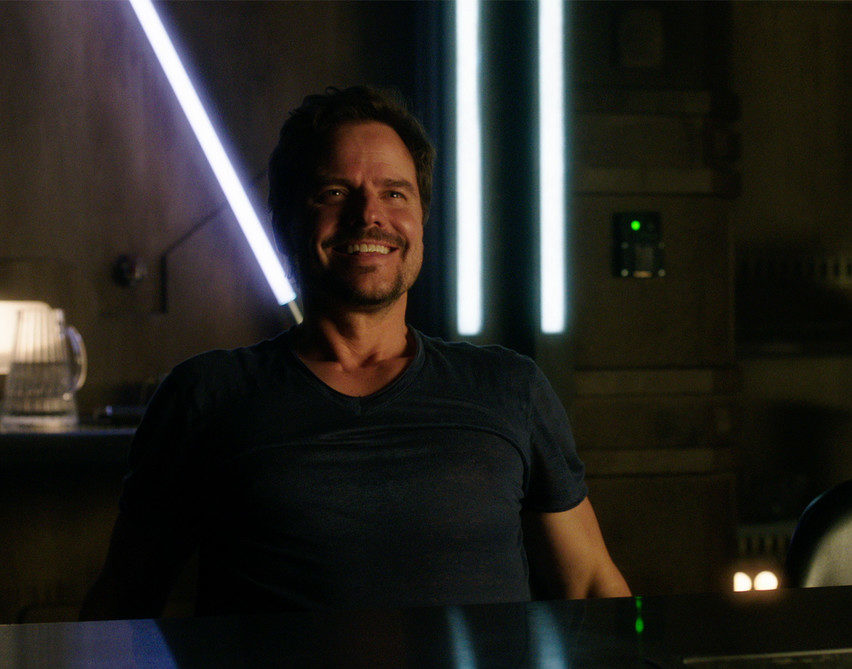 When I first watched “All The Time in the World” it came off as a bit of a mess–not bad exactly, just a mess. But watching it a second time helped me diagnose the issue: it felt like two totally different episodes that suffered a transporter accident, which fused them into one. It’s a Tuvix of an episode if you will.

It starts off incredibly humorous, and I was here for it. Anthony Lemke is hilarious, so kudos to the show for giving him some space to operate. Then it gets serious and action packed, which also works at first. Unfortunately, about 2/3 into the story, the episode decided to just become something else, and while that something else brings up all kinds of other intriguing concepts, I was rather enjoying the first story they were telling thank you very much. I blame it on seasons that aren’t 26 episodes long anymore. Shows have to cram too much into a 10 or 13 episode order, so corners get cut.

It was savvy of them to start the story after Three had already been through a few iterations of his repeated day. Starting from the very first loop would have been tedious. It also allowed the cold open to be pure comedy with Three completely over it right from the start. I liked how they were selling the camaraderie on the ship even among the new crew.

One of the things I appreciated last year about the addition of Arax, Nyx, and Devon was how none of the Raza crew trusted them immediately. It made sense considering where they met them.  Conversely, this year’s newbies are fitting in seamlessly. Solara and Three have a healthy bickership and little Adrian is running around in his silk robe treating himself to breakfast in bed, similar scenarios treated in completely different, almost opposite, ways and it works because of the context.

It’s a common practice in sci-fi to have a day repeat when the protagonist has some catastrophe that they must avert, so when the assassin shows up and kills Three, it fits with expectation. In fact, I was hoping that the culprit of the time shifting was a mix of the assassin’s technology and blink drive residue on the hull or something.

I then thought that it might somehow be tied into Sarah’s consciousness being on the Raza, especially since Three goes to her multiple times in the episode, and the plot thread doesn’t seem to go anywhere nor add to the story in any meaningful way. Wrong again! Tabor’s old time machine alarm clock phlebotinum winds up being the catalyst.

I did like some of the little details in the episode. The moment when Three finally has success consoling Five by using sincerity instead of spouting platitudes comes to mind. I especially liked how genuinely pleased Three was at solving that particular loop riddle.

Another great detail was when Android asked Three if his repeated day might be related to finding out Sarah’s consciousness had been digitally uploaded to the Raza, and Three barked that it wasn’t a symptom of depression. It reminded me about how Three tried to take his own life last year. He was hallucinating, but unlike the other crewmembers with their external mind-assailants, Three’s hallucination relied on stirring up all of his pain to commit suicide.

I wonder what they’re gonna do with the face and half of a torso that the hot, naked assassin left in their bulkhead.

Three’s complexity and Anthony Lemke’s acting really account for the lion’s share of what made this episode work. Shout out to Android for being the perfect foil in this situation. It remains to be seen if the seeds planted in this episode will have an adequate payoff by season’s end.

While underdeveloped, the Android plot could have been a compelling backbone to an Android-centric story. Perhaps she has to solve some problem while experiencing these disturbing time jumps. Those glimpses into the future are some weighted foreshadowing and would have worked so much better in a story that primarily dealt with her arc.

Interesting to note that the blue clock doohickey seems to be in working order when Old Mystical Five has it in the starless distant future. I wonder what that means. For now we just have to keep our eyes and ears peeled and listen out for any of these fated occurrences:

The Fall of the House of Ishida

The Meeting With Your Creator