Running past the far corners of the indie section at PAX East, I might’ve missed an unusual black and white game called Pato Box, developed by indie dev team Bromio. The best way to describe it is as a somewhat lo-fi mashup between Nintendo’s Super Punch Out!!, a first-person adventure game, and a B&W noir comic, but that barely scratches the surface of its surreal atmosphere and tone, which combines humor and revenge themes with a pop art sheen. Most of the dialogue for the supporting characters is sandwiched between their inner thought bubbles (i.e. “Geez, I hope he’s careful this time”), and there are omnipresent themes of doubt and failure throughout the demo, giving the story an unhinged, unpredictable, somewhat doomed feel.

Oh, and the titular main character? He’s a world-famous boxer with the head of a cartoon duck who is unable to speak, aside from quacking. The only way Pato (Spanish for “duck,” by the way) can communicate is by punching things. Sometimes this makes a small amount of sense; for instance, punching a switch on a wall to activate a door. Other times, it’s patently ridiculous, like punching soup ingredients at an irate chef. All of which occurs while your main character occupies the bottom of the screen, positioned exactly like Little Mac lying in wait for a massive boss fight.

Creator of the character and designer Cesar Arminio started the project off as a game jam experiment, but a recently-launched Kickstarter campaign hopes to fund the concept into a full release for both PC and PS Vita. Cesar took a moment to tell BGN some details about the game, so take a look at the Kickstarter in the meantime and support this genuinely unique title.

BlackGirlNerds: The game contains a lot of mysterious ideas. Is the storytelling in Pato Box going to be prominently featured and/or linear? Or will a lot of the story occur in the background?

Cesar Arminio: We wanted to design it with the basics being linear. We do want to keep adding background story elements, rewarding the player for searching the environment for documents and such. If you want to play the game quickly, you will be able to, but if you really like the characters and want to know more, you can look for the hidden items and side-quests that will fill in their details.

BGN: Can you tell us a little bit about how this game and the idea originally came about?

CA: Sure! So, I’m a graphic designer, and I always really liked video games, but the only opportunities that I ever had to do any work on games would be at game jams that I’d attend. I met these guys when they had me come to a game jam as a creative manager. We went through a lot of idea pitches, including a comic book I was working on which would eventually become Pato Box. They found that they really enjoyed the humor and the character in the comic, but also the fact that it had a lot of darkness and pain.

I told them that with the comic, I wanted to express – through symbolism – how a half-animal person with a duck’s face might actually be more in touch with his feelings and passions than a human being. The humans around him are very dull, very sad. They just work for the Deathflock corporation and it’s the only system they understand. 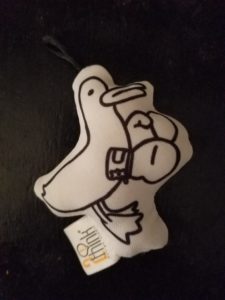 The main character in Pato Box was born from this little guy, the mascot [Cesar points to the company logo on a keyring charm]. I was working for some people who wanted me to illustrate a book, and they gave me a list of all the illustrations that they would need. They missed putting a comma in between a duck and a pair of boxing gloves. It was unintentional, but something about these two concepts did something to my mind, and I started making the comic in my spare time.

BGN: It’s interesting how, when I first approached the game, I thought it would remain humorous overall. But in the demo level, there’s a part where you find a dossier on the main character in a hidden room, and it describes the way he struggles with communicating non-verbally. It struck me how strangely sad this idea was: a person who wants to speak to others, but is resigned to punching them in frustration. He’s punching the world because he can’t talk to it!

Onto another topic, I’d like to ask some questions about the Mexican development scene, of which you are a part. Is there a lot happening in this community?

CA: In Mexico, there is very little in the way of studio-developed video games. The three main cities where development takes place are Guadalajara, Mexico City, and a little bit in Puebla, which is where we are located. The video game industry here is just recently rising. A lot of people here really want to do it, but don’t know how to start out or who to partner with.

BGN: Is Mexico funding these kinds of initiatives at all?

CA: Last year at Pax East, there was another Mexican-developed project, which was funded by Mexican organizations and businesses. So the interest is definitely there.

BGN: Once Pato Box is done, how long should it take to play through it, start to finish?

CA: We’re looking to have seven total bosses, and possibly one secret boss, throughout four or five floors of Deathflock tower. The game takes place entirely in the tower, but the different floors will feature different environments, like secret labs, training grounds, living quarters, and a penthouse with a final boss.

The above interview was edited for clarity. Demo for Pato Box is available to the public on the Kickstarter page.