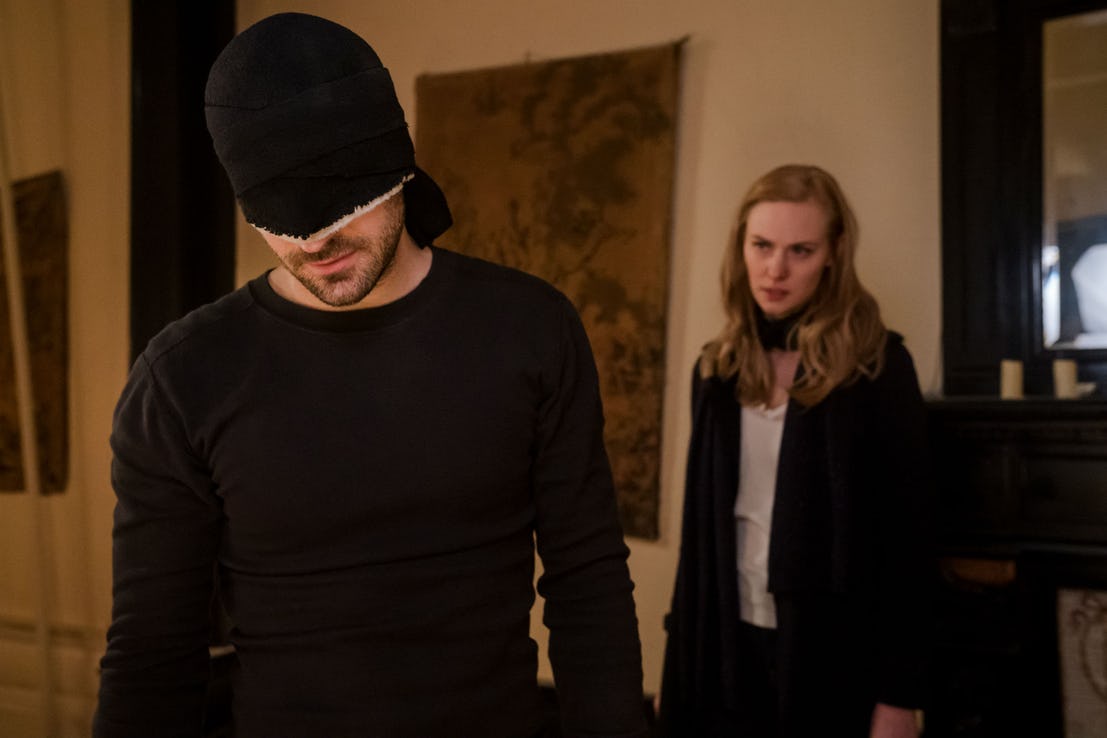 Fans of Netflix and Marvel’s Daredevil will know that the Devil of Hell’s Kitchen has a complicated relationship with morality, his own vigilantism, his enemies, but especially his friends. Now that the world thinks the Defender is dead, be prepared for those relationships to get even more tangled. This past March, Black Girl Nerds went on set during the shooting of the series’ third season and chatted with showrunner Eric Oleson (Arrow, The Man in the High Castle) to find out what to expect from this (semi) post-Matt Daredevil universe.

This Season Will See Fewer Crossovers

If it’s a Marvel property, it seems like you can always expect two things: easter eggs and crossovers. But Oleson revealed he pumped the brakes on the latter for Season 3, in hopes of regrounding viewers in the lives of and stakes for Daredevil‘s core cast.

“I wanted it to be stand alone, I did not do crossovers this season,” Oleson stated. “I wanted to get back to these core characters and use the real estate to focus on who they are and really flesh them out before I introduce external and other elements in the MCU. … I want to fully explore all of the colors of Wilson Fisk this season, and at the same time, really refocus Matt Murdock and our core group – Matt, Foggy, and Karen – on the dynamic between them and the character journeys.”

The Theme Of Season 3 Is Fear

One of Matt Murdock’s (Charlie Cox) most distinctive traits is how little he fears… well, anything. In fact, one might argue the only thing Matt fears is fear itself. Daredevil’s regular test of the limits of mortality and morality will serve as a central theme for this season, even beyond Matt, Oleson said.

“We have kind of a design for the season that is framed around a central theme for me, which is that our fears enslave us,” Oleson said. “Daredevil being the man without fear, of course, was an interesting jumping off point. But as I’m kind of observing the world around us right now, the country’s very divided, the world has a lot of problems, and I think ultimately that it’s everybody’s fear that ends up manifesting in ways that pit us against one another,” Oleson continued. “And villains who capitalize on our fears are able to bring us down. You know the old adage of a house divided against itself will fall.” 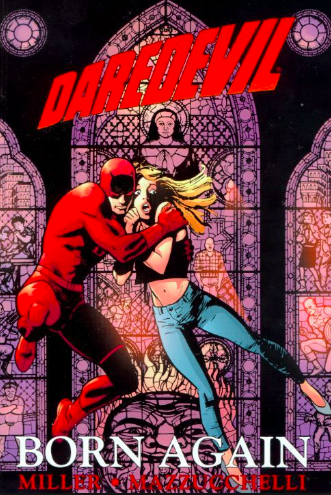 While the show has diverged in enough ways to make it distinctive from Daredevil‘s comic run, comic plots provide an exciting blueprint for the potential of each season’s overall arc. During our conversation, Oleson revealed that Season 3 will very much be its own original story with a touch of inspiration from Guardian Devil and the Born Again comics.

“My hope was to draw inspiration from comics like Born Again and Guardian Devil, and there are certainly moments that resonated for me totally that I used as inspiration,” Oleson said. “But it is an original story. I am not doing a direct translation of any of the comics. I think that would have been a mistake. I wanna make sure that everybody’s really hooked with an original story where they are deeply invested in the characters this season, and understand why the characters behave the way that they behave and do the things that they do. And I was very much interested in bringing more contradiction and dimension to some of the characters that we’ve grown to know and love on the show.”

The World Is Darker, And More Unpredictable, Than Ever Before 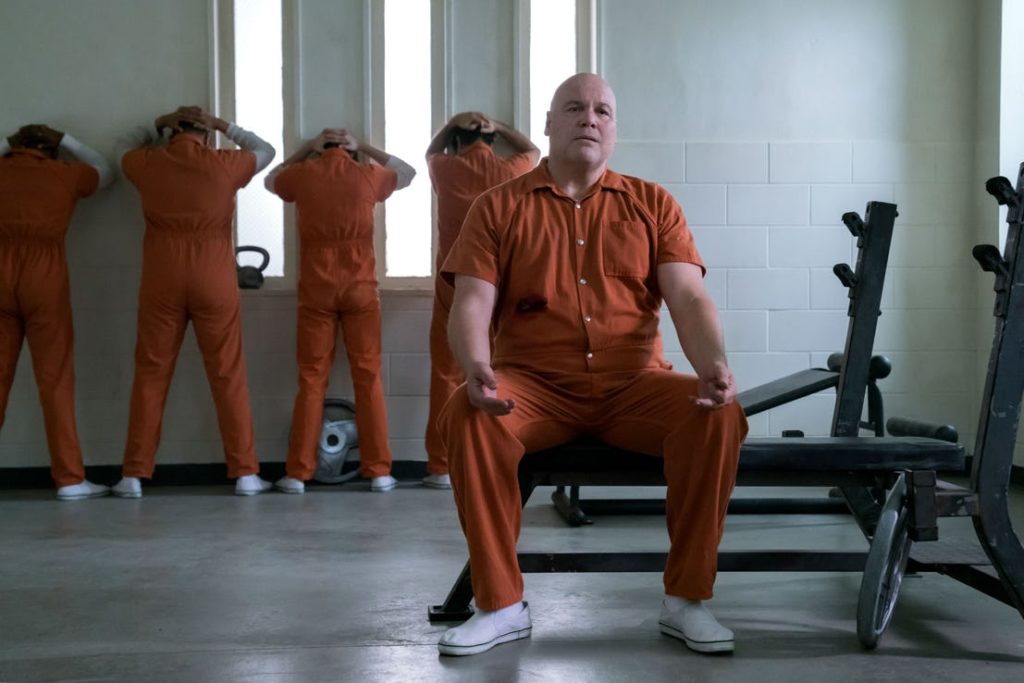 From Daredevil‘s very first season, critics have consistently remarked on its dark angst and grittiness. Season 2 seemed to take the series to a whole new place with the addition of The Punisher, and now Season 3’s showrunner, Eric Oleson, promises the darkest step into the criminal underbelly of Hell’s Kitchen yet.

“Just in general, I wanted to tell a thriller that is somewhere totally between Season 1 of this show and the Sopranos,” Oleson said. “And it’s much darker, more character driven. The actions sequences are violent and explosive and very much Daredevil, and yet there are real stakes to every action sequence this season. There are emotional decisions that are being made. There are characters that will die. There are fights Matt will lose. It is not a predictable season.”

The Band Will Not (Immediately) Get Back Together

Following the events of The Defenders, Karen (Deborah Ann Woll) and Foggy (Elden Henson) now believe their best friend is dead, and Matt is broken-hearted, broken-boned, angry – and alone. Oleson reveals that the last part is something Matt doesn’t immediately want to give up, a decision that forces the trio apart for much longer than fans may have anticipated.

“As we kick off the show, we’re gonna find Matt Murdock in a very, very dark place,” Oleson teases. “He is not letting his friends know that he is alive at the beginning of the season. He’s letting Foggy, and Karen think that he perished under the Midland Circle building at the end of Defenders. Karen and Foggy, like Matt, are on their own individual storylines and are messed up by the death of Matt. Karen doesn’t want to admit it’s possible. Foggy thinks he’s dead. And it has screwed them up. They are trying to deal with the aftermath of what happens now. Like, how do we move on from our friend?”

Wilson Fisk Is Building His Own Redemption Arc 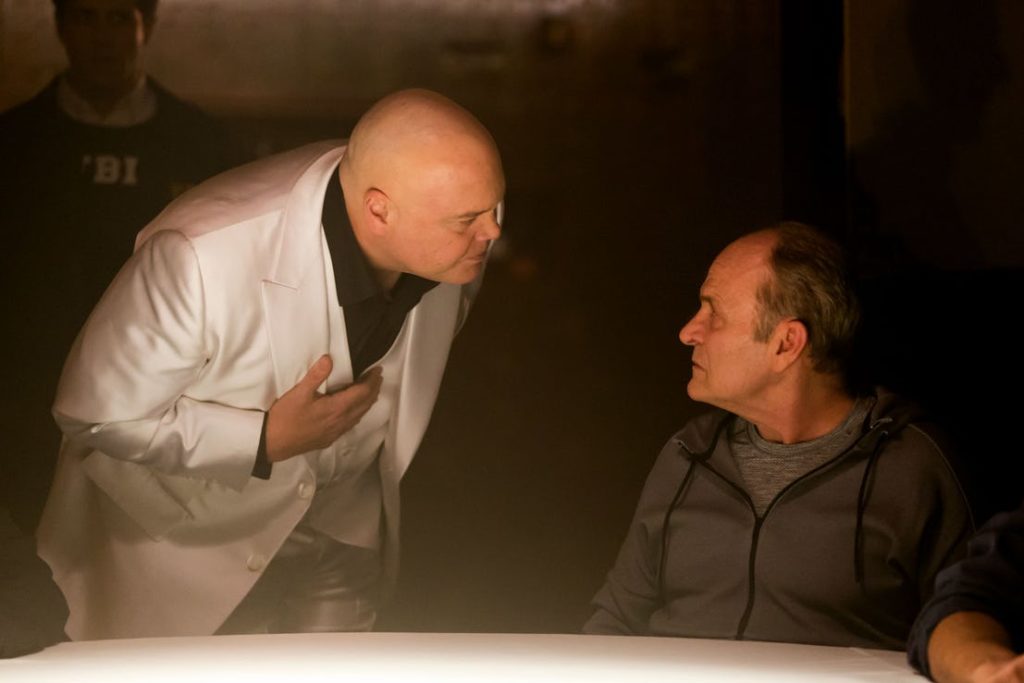 Kingpin is somewhat notorious around the Marvel universe, so it makes sense that Daredevil wouldn’t be able to keep him at bay for too long. How Wilson Fisk (Vincent D’Onofrio) gets out of his current predicament is not just drawn from general criminalism, but from a deep desire for the world to see him the way he does.

“Fisk has been locked away,” Oleson said. “He’s a prisoner. I think the police hate him. I think he’s seen as a villain by the city as he comes into Season 3. Now he has his eyes on undoing the way that the world sees him. And of course, that is something that will play across the season, but he starts out kind of a vagrant. The first shot of Wilson Fisk – he is more or less depressed in a prison cell, and he’s playing a deep game of mental chess about how to get himself out of his current predicament. But he is, as he was torn down at the end of season one, seen as a villain by the world at large.”

More Than One Villain Will Make An Appearance

Fans have speculated for a while about which of Daredevil‘s more recognizable villains would make an appearance in Season 3. While Fisk is slated to return, Oleson revealed that he may not be the only thing standing in Matt’s way of protecting the city.

“I think there is another character on the show who is a very physical threat to Matt, who in many ways is able to balance and-or even at times best Daredevil,” Oleson teased. “So somebody who can kind of match him blow for blow, and is also deeply drawn psychologically, and is a real human being, and a character in and of his own right. We will hopefully see that character as a person with his own wants, needs, and desires, and understand what those are. And the way that he will clash with Matt, I think it will… It will illuminate aspects of Matt’s character, and at the same time it will illuminate aspects of this other villain.”

One of the most compelling aspects of Daredevil is how Matt’s relationship to his staunch Catholicism guides his heroic complex. According to Oleson, Season 3 will explore how the events of The Defenders and Season 2 test Matt and the thing that’s governed him his whole life: his faith.

“Matt has issues with God, he has issues with his abilities,” Oleson. “He is not in physically good shape at the beginning of the season, and is physically incapable of being the Daredevil that he has always been, and is going through somewhat of a spiritual crisis as a result. You know, an identity crisis. Matt has survived Defenders but at a terrible cost. And if we’re being truthful about anyone who has gone through what Matt Murdock has gone through over the past two and a half seasons, [they’re] definitely gonna bare some psychological trauma from that.”

We’ll Discover What The Man Without Fear Actually Fears

Getting inside the head of a superhero to find out what makes them tick is compelling, and integral in many ways to getting a satisfying hero arc. So it makes sense that after two seasons of somewhat dancing around the issue, Daredevil is finally going to peel back the layers and get to the heart of what is indeed driving (and terrifying) the Devil of Hell’s Kitchen.

“I think the man without fear, Daredevil, is actually afraid of something. I won’t tell you what that thing is, [but] it’s not spiders,” Oleson said. “…Matt actually kind of psychologically informs his arc this season. And when he gets to the end of the season, he will realize that it actually was a motivation for a lot of his decisions over the course of the season. That [it] is a psychologically rooted fear.”