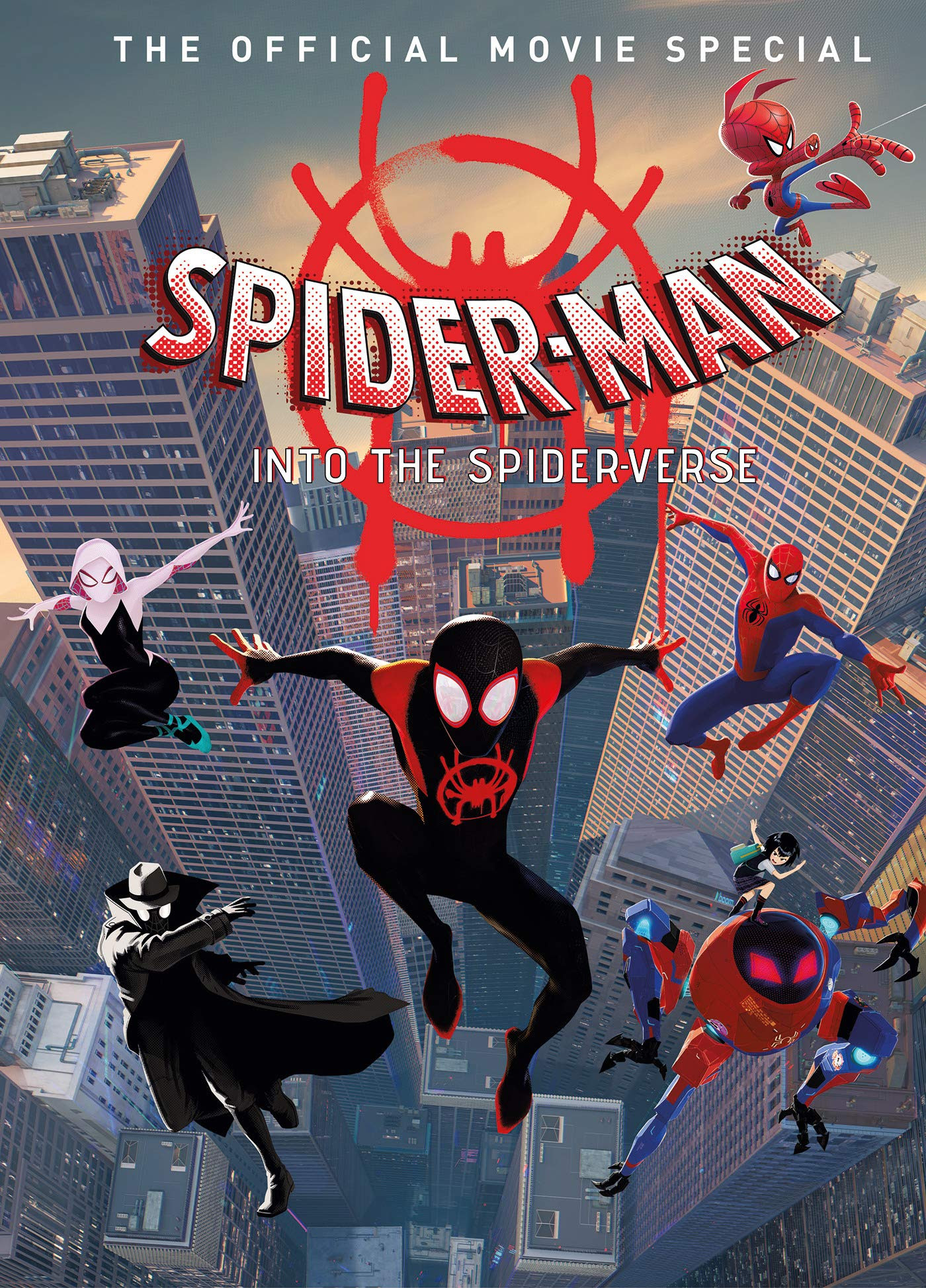 In the Marvel Comic Multiverse, we have lived through the various clones, the symbiotes, and the body-snatch. In the most recent stories, it is discovered that all the different realities in the multiverse are connected by a web, which is managed of course by a Spider-Person. There is this vampire-like family traveling throughout the Spider-Verse sucking the Spider-essence from each Spider-person or totem to prolong their lives. Naturally, the Spider-Heroes assemble and heroic efforts follow throughout a myriad of titles and limited series.

Along similar lines, shortly before Christmas, Sony Pictures released the newest addition to the Marvel Cinematic Universe, the animated movie Spider-Man: Into The Spider-Verse. If you’ve seen it, you know that the movie essentially Avengered the different Spider-People, by taking the most popular ones from across the Marvel Comic Multiverse to the big screen. The movie features Miles Morales of Earth-1610. Yes, the various alternate realities are numbered. Miles Morales originates on Earth-1610, while the original Spider-Man hails from Earth-616. There’s also Gwen Stacy, who has been known as Spider-Woman for a hot second but is currently going by Spider-Gwen from Earth-65. All the Earth- dash stuff boring you already? Well, it i isn’t really that important to know from which Earth everyone resides. However, the folks at Titan Books have produced a hardcover featurette that does a good job keeping everything in order. 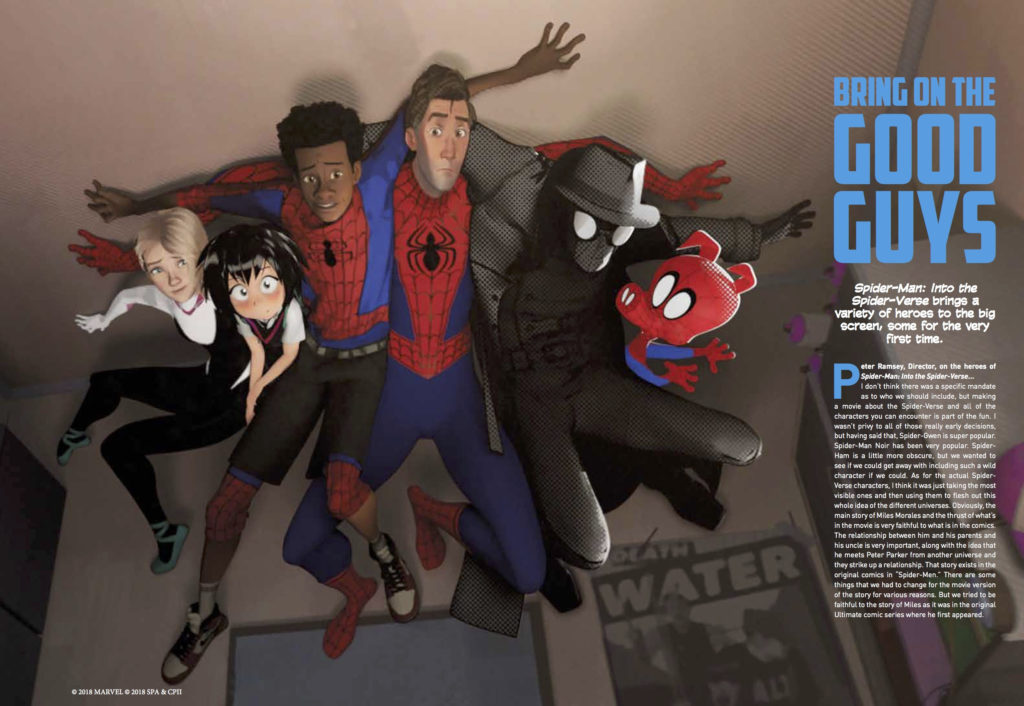 The book is titled, yes you guessed it Spider-Man: Into The Spider-Verse. Broken up into different sections, it covers the Morales family, his allies, the villains and of course info about animating the story. Among Miles’ allies are a group of individuals each gaining spider-like powers as the result of a bite from a radioactive spider on their respective Earths. Mentioned already is the main character Miles Morales, who is learning his abilities and the greatest lesson every Spider-Person has to learn: With great power comes great responsibility. Then there is Spider-Gwen, Spider-Man Noir, Spider-Ham, Peni, Sp//dr, and good ole Peter Parker from the original Earth, who have already had their realization of their responsibilities. Although, one of them may need some refreshing and a gut-buster (Sorry, Peter!). Not to be left out, the villains, including a frequent Spider-Man and Daredevil foe and current comic mayor of New York, the Kingpin are discussed as well.

The book is a combination of interviews, concept sketches and drawings, including scenes from the movie. The interviews include discussions with the directors, production designers, and staff from the animation team and delve into the how the actors’ performances and personalities affected the story. The book goes through each individual, how they got their abilities, and comments from the actors about their character. For those who can’t wait for the sequel, it also discusses their first appearances in the Marvel Comic Multiverse as well. The discussion on Spider-Man Noir, one of the less known Spider-Men co-created by BGN’s good friend Fabrice Sapolsky, was really informative. It was also interesting to understand the need for different animation styles for each of the characters, as the two-dimensional style of the larval universe to the dark stylings of Spider-Man Noir created different challenges for the animation department when on screen together. 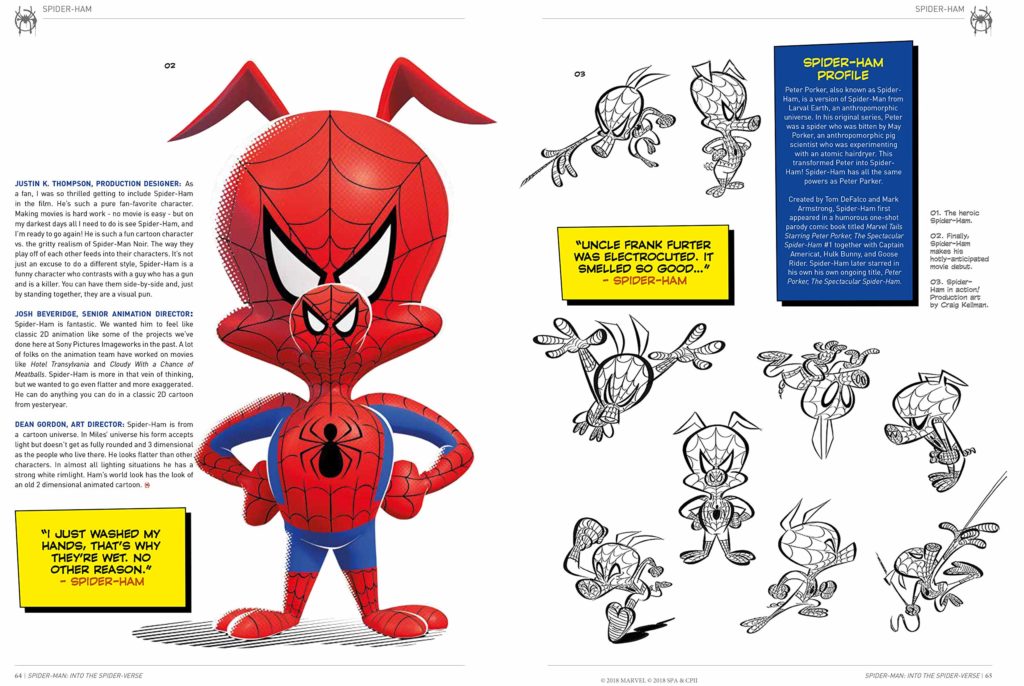 Like the movie, one of the great aspects of the book is that it effectively combines the different challenges that come from not just introducing new characters to the non-comic fans, but it also promotes the artistry and skill required in the writing, drawing, and voicing of the characters to reveal how the different artists approached their role. The book tells the story of skilled artists who get the opportunity to get their geek on with one of the most beloved superheroes of all time and introduce the future of the Spider legend. This is a great book for any budding cinematographer or artist. It’s also not a bad read for those of us who just like Spider-Ham, I meant Spider-Man, not the first one (well maybe, but the second one for sure). No matter who your favorite Spider-Person or villain is, this book has something for everyone. Check it out at your local comic shop, bookstore, or favorite online book vendor.