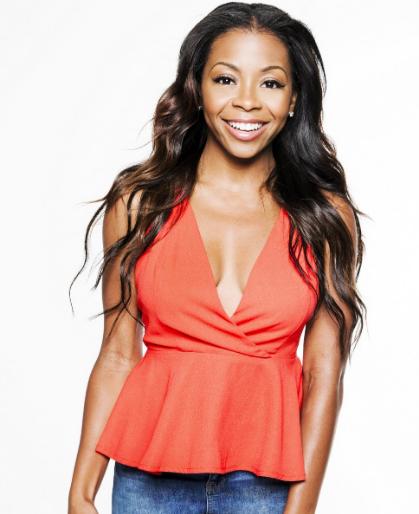 Bresha’s in this. You know Bresha right? Bresha Webb, the actress from around the way in Baltimore now working it in Hollywood and guest starring on the new Independent Film Channel (IFC) sketch show, Sherman’s Showcase?

That’s how it could be amongst friends talking — and BGN did talk to the actor whom some might remember from TV One’s Love That Girl or that special edition of SNL that focused on African-American comedians. Webb discussed her role in the new sketch show (she hasn’t seen her performance), realizing her dream of getting to sing and record songs, plus those soul diva imitations.

How is it going for you with this great project?

It’s kind of great for me doing this, recording music. My dream role is Diana Ross. It’s something I’ve always dreamed of doing. I’ve always wanted to sing and dance. I’ve done that in high school musicials and portrayed people like Mary J. Blige and my other character, which is lightly based on Anita Baker. These are my studies, and I’m going off the laughs in studio. So for me to do it in the studio is so fun for me.

When did you know you were funny?

I was raised in the church. As a little girl, the grownups wanted to hang with me. Even as a three-year-old, I would say things that the adults wouldn’t say. I would make people laugh. I would do play church, and I would make fun of everybody in church. When I saw the visceral reactions, like when I got in trouble, I could make Mom or Dad laugh and…change their opinion.

I went to college, I went to art school, and I started out doing drama, but my heart has always been in comedy. Then when I did Love that Girl with Martin Lawrence and Bentley Kyle Evans, they said you have to get on the stand up trajectory.

Going back a bit, What was it like to go from B-A-L-T-I-M-O-R-E to California to attend the California Institute of the Arts?

CalArts? It was culture shock. I was the only Black girl in my whole class — real Black, who like regular raps and all that. It grew me up, and it got me ready for this industry. [Learning] how to work with different people, different cultures, everything. It’s a very avant garde school.

I went to the Baltimore School of the Arts where Jada Pinkett Smith went, Tupac, Tracie Thoms, a lot of Broadway people were on there, the Alvin Ailey dancers. A lot of people went to my school, which was great because they really gave me the core of what was needed.

But I’m really glad I went to CalArts because they got me ready. I was really from Baltimore. It got me ready for this industry, and I am really appreciative of that.

So when did you know you could make a career out of this?

I think I was nine. I did a regional play for Fences and played Raynell, with New York actors, a great show, and August Wilson. Center Stage was a big regional theater in Baltimore, and I got it out of 3,000 girls that auditioned from New York, District of Columbia (D.C.) and Baltimore.

I remember being backstage and getting the jitters. I went out, did my part, and got a laugh. I had so much fun and I thought, “And I get a check for this? Oh, this is what I’m doing for the rest of my life!”

Where did you do stand up comedy?

Everywhere — The Improv, The Comedy Store, The Comedy Union — a lot of people started there. I also did a women’s comedy group, which helps women start comedy because it’s such a male-dominated industry. To get up and do comedy with other women creates a little sorority. It’s so cute, and I always try to give back. That’s kind of where I started doing my characters and what I do in my one-woman show called, This is My Show.

That is hard core. If you did come through all that, then you really have the chops.

Thank you. I’m hoping with this that is what they will see. Dialio and Bashir see me. TV is great but it only lets you show a slice of you. So this is just another slice that people can see. I mean, I love the Black Lady Sketch Show. I had an opportunity to be on that as well. Those ladies are hilarious. Robin Thede — we go all the way back to Affion Crockett (circa 2013) that Jamie Foxx produced on Foxx.

So just to see the evolution, all of us coming out, Issa Rae, just the mastermind of Issa Rae, and to see so many women coming out and telling their stories is just great. It’s just great to be a creator, to be talented in this time as a woman, as a black woman. It’s opening up a lot of doors. I’m really happy to be a part of this class.

You have all these celebrity friends; “Will&Jada,” Jamie Foxx, Tracy Morgan… How? When? Where?

Well, I worked with Tracy on The Last OG. That whole thing came about because Marlon had just ended and Tiffany Haddish is one of my best girlfriends. We met doing standup. Well, my girlfriend was auditioning for Marlon, and she said, “I don’t think I am right for it.” So she put me on tape. I had literally just got the call that Marlon was going to be done.

I booked The Last OG, and Tracy was, “So happy you’re here.” It was the first time I’d met him, and he was so sweet. I didn’t get to do any scenes with him, but I am excited for the next season.

Jamie — we’ve known each other for years. He saw me on Love That Girl. His producer from The Jamie Foxx Show had told him, “I’ve got this girl who’s killing it. You gotta see her. She does characters.” [Foxx] came on set, and we became friends. He told me to come do all the characters for him, and I wowed him with everything I’d been working on. It aligned with what I was already doing. He said, “You’re my family. You’re special,” and it’s been that kind of collaborative friendship ever since.

Will and Jada I’ve known since I was a little girl. My best friend, Whitney, whom I grew up with, is Jada’s first cousin. It was right when A Different World was going on, and she never told me that Jada was her cousin. I would come around, and she would hide the pictures. When you’re a kid, you don’t want anybody being your friend because of who your cousin is. So it was such a surprise when she told me and brought her to my birthday party. But yes, it’s great family to know. I am blessed.

What funny ladies do you especially admire and why?

Whoopi Goldberg. I loved her and was obsessed with her. I still watch her on The View.

Moms Mabley — my dad would play her albums when I was little — which is weird but he knew I had an itch for comedy. So he would play those old albums, and I would just listen to the vulgarness and all that.

Tracy Ullman. I grew up watching the one-woman shows, her specials, and her TV show on HBO. I loved that she had a pop song.

I love Bette Midler and her pizazz and her singing. I loved all the women in Sister Act, Lucille Ball — women who aren’t afraid to make ugly faces. I love and respect women that just surrender to the comedy.

The Women Behind the Film ‘Song and Story: Amazing Grace’ Share What it Means to Them