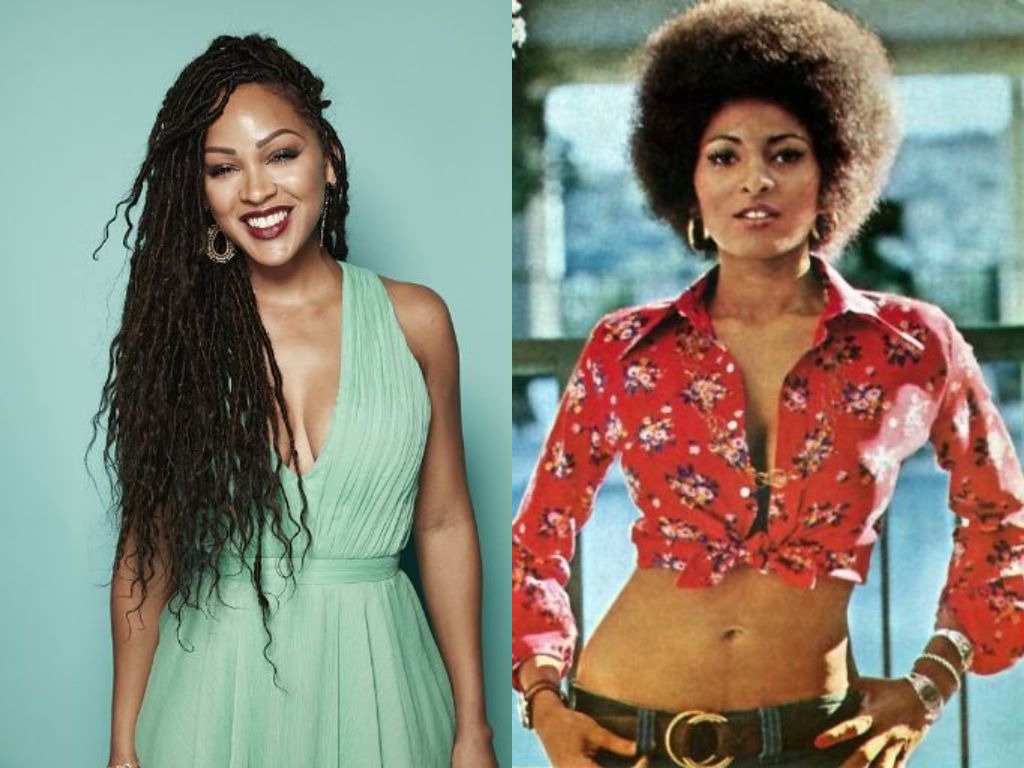 Not sure if you heard, but a reboot of Foxy Brown is coming. The upcoming Hulu series will star Meagan Good and will be produced by herself along with husband DeVon Franklin and Tony Krantz.

Foxy Brown was originally a 1974 Blaxploitation film starring Pam Grier. Blaxploitation, meaning “black” “exploitation”, was the label given to films released between the early to mid-1970s with African Americans cast in the lead and majority of the roles; often featuring characters such as drug dealers, prostitutes, pimps, and the like. Despite the many negative traits that can be attributed to the genre, it can also be seen in a positive light. These films were some of the first to show black people as strong heroes and heroines in pop culture, creating numerous jobs in the film industry for African-Americans that weren’t as easily accessible prior.

Other notable Blaxploitation films you may have heard of are Shaft (the one with Samuel L. Jackson was a remake), Superfly, Blacula and more. For the millennials, like myself, who were not yet born, you can watch these movies at a local online streaming service near you.

So, about this remake…

I need fashion and music to remain a staple of the show. In the film, Foxy was stunning in every scene from street clothes to evening wear, hip and dramatic. Her hair was always on point whether natural or a wig. Whatever they decide for the show, she should be fabulous and I wouldn’t mind a tinge of 70s flare.

It would also be great if the music could take a cue from the 70s with some funk influence. The soundtrack on Luke Cage did an excellent job combining the old with the new. Maybe a little neo-soul could be dropped in too.

As for the plot, it was typical for Blaxploitation films to portray issues that were thought to have afflicted the black community at that time. In the original Foxy Brown, Foxy seeks revenge on the people responsible for the murder of her federal agent boyfriend who uncovered a drug operation. She learns the ones behind the murder are using a talent agency as a façade to run a prostitution ring, so she disguises herself as a model to get close enough to the culprits.

I think that’s an interesting plot, but for the remake, I personally would like to see a premise that more closely resembles the storyline in Coffy. Coffy is another Blaxploitation film that preceded Foxy Brown also starring Pam Grier. Supposedly, Foxy Brown was intended to be the sequel of Coffy before changes were made. In Coffy, the protagonist is seeking revenge for the people at fault for her younger sister’s drug addiction. Essentially, this means she’s going after the system or the “Man”.

Coffy cons and fights (literally punches and kicks) her way up the ranks of the drug and prostitution ring to confront the enemy. She was merely a nurse, but I promise it works for the movie. The writers could have chosen a “better suited” profession such as Special Agent like in Cleopatra Jones; another Blaxploitation film with the heroine on a quest to take down an opium operation. However, a nurse, a common person, makes the character more relatable allowing the audience to feel like they can also make a difference in this world.

Hopefully, the new Foxy remains a vigilante whether she’s a nurse, a security guard, or a paralegal. Maybe she can have the same characteristics – caring, smart, cunning,no-nonsensee, brave – stopping crime in her Corvette. (Note, Foxy nor Coffy drove a Corvette, but Cleopatra Jones had the coolest ‘73 Corvette Stingray, and I feel very strongly that Foxy Brown should adopt that element).

In the remake, of course it would make sense to update the story’s conflict to mirror issues we face today. Maybe a scenario like this for instance: Foxy’s younger brother is away for college. Him and his buddy are driving back to the dorm after a frat party, he’s in the passenger seat and his buddy’s driving. Suddenly, they get pulled over by the cops without a clear understanding of why. They had very little to drink, they weren’t speeding, tail lights seem to be working. For some reason, the cop feels he must search the car and upon searching finds some marijuana, which they both claim is not theirs. Regardless, both Foxy’s brother and his friend are taken into custody. What is thought to be overnight confinement becomes much longer and they find themselves facing major charges.

Now, Foxy’s brother is in danger of losing everything; his freedom, his scholarships, his reputation, his future. Foxy uses all her resources to investigate and find a way to free her brother “by any means necessary”. Throughout the series, she could also win justice for other victims of police brutality, racial profiling, discrimination, etc.

I’m excited to see what the showrunners will do with the remake.

DY is an aspiring filmmaker and writer; she loves all genres but is increasingly becoming interested in writing fantasy and sci-fi. She’s also a martial arts practitioner; not a black belt yet, but getting there. When she’s not fighting, she’s spending all her time watching anime and movies, and reading comic books. Follow her on twitter @dyprinzess.

I am speaking on behalf of myself and my views do not necessarily reflect those of anyone else.