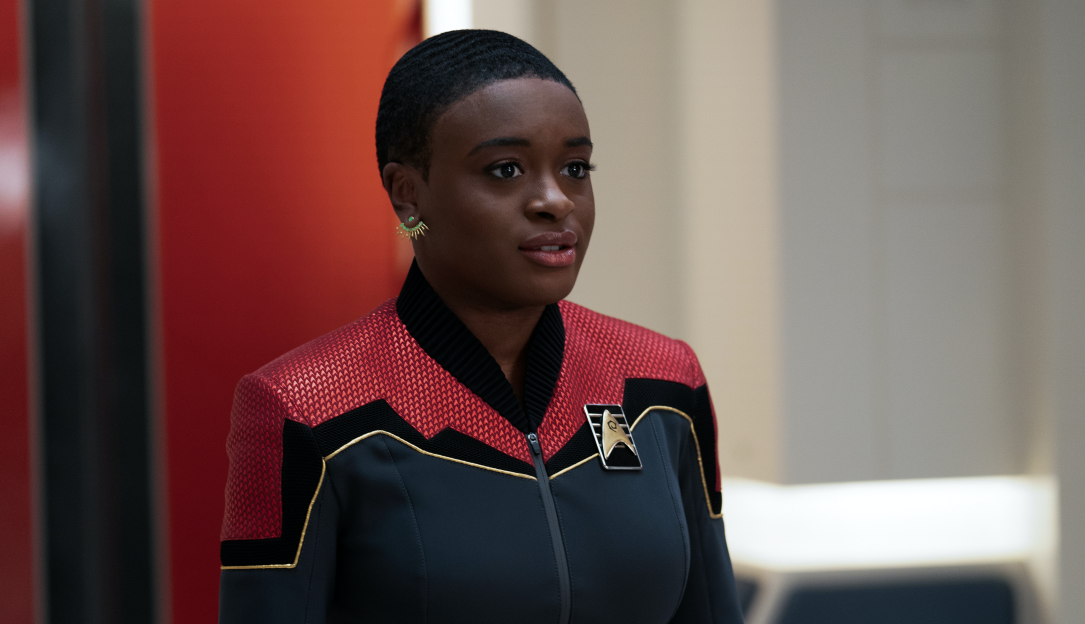 BGN had the pleasure of speaking with Celia Rose Gooding, the rising star of the new Paramount+ series: Star Trek: Strange New Worlds. In this series, she picks up the torch left by Nichelle Nichols to play the iconic Nyota Uhura.

I’m so excited to be connecting with the beautiful and talented Celia Rose Gooding! Thank you for taking the time to interview with BGN. How are you?

As a black girl nerd myself, I am very excited to have an opportunity to speak to you. I’m a huge fan of your platform.

Ahhh! That’s so exciting to hear and we are just as big fans of yours! Fans may recognize you from your role as Mary Frances Healy in the rock musical Jagged Little Pill. You’re so multi-talented, which is meaningful for fellow Blerds because we’re not one-dimensional. This is an aspect we’ve seen you bring to your depiction of the legendary Nyota Uhura. Watching you blossom in your career is exciting to witness!

Thank you! I am a huge fan of my multiplicity [laughs]. I’m so honored because it does mean a lot to me. I remember young Celia was scared of her multiplicity and that there wasn’t space for her. But, I have an opportunity to stay true to her and to be celebrated for that.

Our culture understands better now that it’s okay to evolve as your passions lead you in another direction. That’s why the historic character you play has always resonated so well with young girls. We are not a monolith. Nyota Uhura was a trailblazing depiction of roles that Black women could bring to life. I’m so excited to hear about what that experience has been like for you.

I mean, it’s been incredible. I firmly believe that if it were not for Nichelle Nichols and her decision to stay in this franchise, I, of course, wouldn’t have a character to play in the show. I also don’t think I would have an opportunity to be my full, well-rounded self on stage and on screen.

As you said, Nichelle Nichols was a trailblazer for Black women in entertainment and Black women in science and starting NASA programs. She and the character really opened the door for Black women to be themselves on all different platforms in all spaces professionally. So, passing that torch blows my mind and makes my heart swell.

As time continues, we’re opening more doors for Black women. We can be themselves and really feel comfortable, just showing up as themselves and not feeling the need to adopt other unnatural things just to fit in. My inner child is singing, dancing, and running around — she’s excited [laughs].

That is truly amazing to hear! We have gotten to see where this character ends up. What’s unique about your depiction is that we catch her at an earlier stage of her life! How has that impacted your approach to the character?

Exactly, we know that Nichelle Nichols was a lieutenant and that she was the commanding officer. Having the opportunity to show her as a young cadet gives viewers a chance to see and accept her. The fact that we, Black women, grow, and there will be messy moments! Those moments are just as deserving of the spotlight — and we know her future. We know that she’ll continue with the Enterprise. She’ll eventually take a role as a captain in the future, but to show her as someone who’s still a little insecure is very humanizing, and that’s important right now.

Do you feel like there are some parallels that you found between yourself and Uhura as you’ve grown into this role and continue to rise to prominence?

Oh, absolutely! I often go to the writers, and I’m like, who’s speaking to my therapist?! Who is in my journal, reading my personal notes and putting them on screen? [laughs]

As someone who is incredibly young in this industry, having an opportunity to show that vulnerability and feeling of, ‘I know I’m very good at this, but is this what I want to do with my life and to have that parallel with Nyota […] blows my mind. I’m incredibly grateful to have this opportunity to showcase, for myself and other Black women, as people and human beings, not just pillars and icons.

Something that I found adorable and came across recently was the Spotify playlist you created in honor of Nyota Uhura. First off, I love the songs that are on there! Classic hits — people LOVE it! What was the intention behind that and how did you come to create such a beautiful playlist in dedication to the Nyota?

This character is so loved, popular, and idolized in the sci-fi and entertainment communities. So, I wanted to have something that felt personal and that I could use to connect with this character and the side of myself that I think was integral in portraying this character. It’s also a way to connect with my roots as a Black American, so I found all these songs that made me feel like I was home on a Sunday morning flipping pancakes with my mom and my sister.

It became an ode to my inner child because that is who I’m connecting to for this character. So, all these songs make me feel like I’m being hugged and held and uplifted. I wasn’t expecting that many people to love it [laughs]. Now it has become a way to continue humanizing and empathizing with this character. She is Nyota: someone who does so much for other people, and as Black women, we are constantly giving ourselves.

Sometimes, we have a difficult time receiving the same energy that we give. Since I’m so musically connected, music is my love language. So, having something that is for her, it’s like my super hug to Nyota. I make playlists for all my characters that I end up playing because that’s how I connect. I will keep editing and updating it because music is how I truly connect. The fact fans are excited about this playlist means a lot to me. I’m glad people enjoy it.

I immediately saved it to my library because I couldn’t stop jamming! You can always count on the musical theater kids to come through [laughs]. Thank you so much for carrying the torch, Celia! We’re so excited to see what else you bring to this role (and that playlist)!

[Laughs] Thank you so much! Absolutely!


Fans can catch Celia Rose Gooding as Cadet Nyota Uhura on Star Trek: Strange New Worlds on Thursdays on Paramount+. Episodes 101, 102, and 103 are currently available to stream on Paramount+ now.