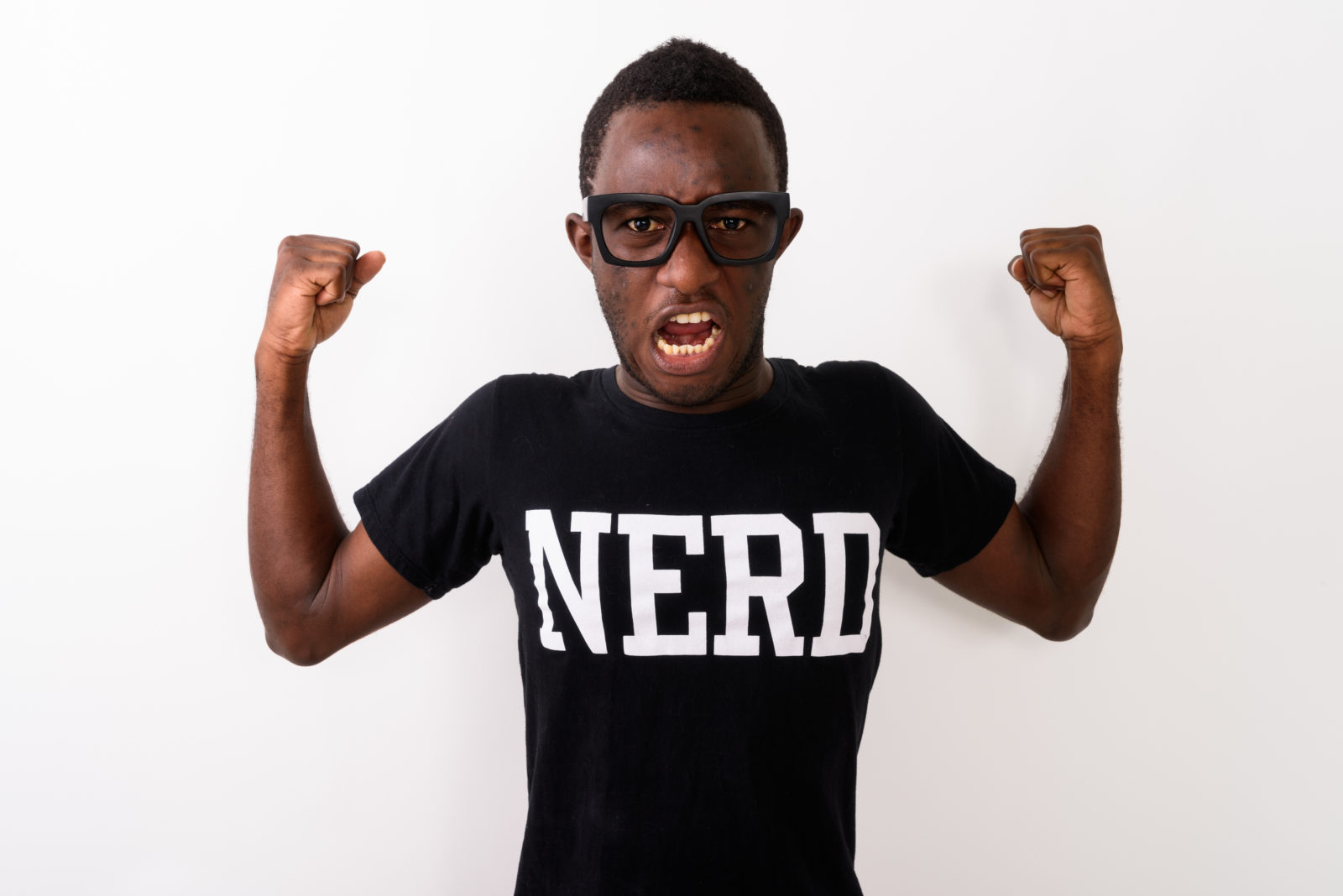 “Calling yourself a Blerd doesn’t mean you want to separate from anything. It only means that you are telling the world that you want to still identify with the part of you that makes you ‘Black.’” (via Geek Soul Brother)

The word Blerd was created in 2003. Although the credit for it going mainstream goes to Scrubs (Season 6, Episode 2, “My Best Friend’s Baby’s Baby and My Baby’s Baby”), it first made its appearance in jest in the comment section of an online forum for the rock group There May Be Giants to single out the only Black fans among them.

Before that, there was no word to describe a Black nerd because the notion was that we didn’t exist.

That’s because, before the early 2000s, being Black was generally associated with one of two caricatures: being tough and angry or being down AF. Writer Eric Deggans puts this into perspective: “For years, we Black nerds felt caught between white folks’ expectations that we’d be cooler and Black folks’ disappointment that we’re clearly not.”

I recall a time where being nerdy was just considered “white,” and if you dared show your fandom in public, you were bullied, harassed, and outcast. Skip.88, the administrator of Blerdover, can testify to this.

Skip started Blerdover when he noticed a trend of nerds of color at his local arcades and events. He began to feel that he wasn’t alone in the culture and that if he tried, he would find more nerds of color like himself (if you build it, they will come).

His goal was to provide an online safe haven for people of color in geek culture to be free to be themselves because of his experience with bullying in his youth.

During our recent interview, he described his upbringing as “challenging” thanks to the love of his geek fandom. “Back then, you could not say you [were] a nerd. Being a nerd meant you were a loser,” he said. “You had to be something cool to be accepted during those days.” He spoke about how his friends would often hide their fandom in public for fear of not being socially accepted. “They were undercover Blerds. We’d be in school, they’d be one person, then when we’re out of school, we’d all go to somebody’s house and geek out.”

That’s because, before 2003, the notion was being nerdy, he said, was for white people. “This is not what Black folks do. This is unbecoming of an African American male or female.”

This is why when voiceover artist Zeno Robinson took home a Crunchyroll Award for Best Voice Actor performance in English, it was such a big deal for me. I couldn’t contain my screeches and cheers as I watched @Childishgamzeno end his speech with a dab.

I’m proud of Zeno Robinson. Not just for taking home this win (and yes, I was rooting for him; like Issa Rae, I’m rooting for everybody Black), but for taking the time to shed light on a major issue, lack of representation. In his acceptance speech, he said, “I’d like to dedicate this moment, this award, this achievement to all my actors of color out there. My anime fans of color out there. My Black actors and Black anime fans who have carried this medium on their back and our culture for as long as I’ve been a fan of it who may not have always felt represented or seen or reflected in this medium.”

Blerd representation is important because it makes you feel like you matter in a world that rejects you for being different. Blerds often feel out of place and unspoken for.

When Robinson used his national platform to utter the words “who may not have always felt represented or seen or reflected”!? I felt that.

It felt like someone had finally addressed the elephant in the room.

His speech embodied the Blerd experience, a marginalized sub-group of fans who often fight for their rights to nerd out.

In a matter of 60 words or less, he managed to speak to:

And countless others. Lack of representation goes way deeper than the anime platform, and it stems way beyond 2020.

Growing up a Blerd, I often felt isolated and alone. My favorite characters didn’t look like me, my peers couldn’t relate to me, and I felt like an oddball. Before 2003, being a Blerd felt like being an abomination. There’s this expectation that you’ll only like “Black” things, or because you’re Black, you have to be a certain way. If you’re not, then you’re corny, or you’re betraying your culture, so you’re exiled.

Because being a Black nerd was considered taboo for so long, many of us were in hiding. We wouldn’t feel comfortable showcasing our fandom in our communities. In my youth, I would rather have kept my fandom to myself than risk the consequence of standing out and being made fun of. Others made you feel like you had to choose between being Black and being nerdy, when the reality is that I’ve never abandoned one for the other. Blerds never do. We find a way to marry them both, and that’s what makes us unique.

Fellow Blerd and digital editor Kevin Smith shared his experience growing up in New York’s inner-city in the early 2000s: “I feel like I didn’t get to express how much I actually liked these things growing up. You know how the Bronx is. If it’s not following the trend of what’s hot then, it’s weird or frowned upon. You’re weird. You’re the weird kid. I never wanted to be that. Everyone at some level that young wants to be accepted by peers, so I would try to suppress it. I would still express that I liked these things, but I definitely watered down how much I liked these things. The only real-time I got to be who I am was with my family. It was the environment that made me not want to do it.”

Representation creates safe spaces, and Blerds have struggled with finding safe spaces for the entirety of our existence.

When you share the stories of a race, creed, or culture, it lifts feelings of invisibility. It makes the people who can relate feel spoken for and valued.

When the representation of your culture is prevalent, your existence is normalized, therefore eliminating the feelings of alienation or unconventionality. In simple terms, representation shows people, “We belong here.”

Nerd (or geek) culture is about the love of the fandom. It shouldn’t be forbidden to anyone, and even with the emergence of Blerd podcasts, sites, and influencers, there aren’t enough spaces for the Black geek. It’s time we turn the tide.

I think we should show the world Black people can be different. We come in varying sizes, types, and personalities — a lovely bouquet of brown. We have vast hobbies and interests, just like everyone else. We’re not two-dimensional caricatures.

Blerds only come off as taboo because of how Black people are portrayed in pop culture, and it’s time we start showing ourselves in a new light. Not just as angry or oppressed or stylish but also as happy, intellectuals, heroes, and weirdos.

We have been in these spaces for years, but we don’t have enough mascots to advocate for us.

We have to carve out more spaces for ourselves. We need more creators in the field to share our passions and tell our stories like our founding fathers (and mothers) of Blerddom. As Kevin Smith said, “I think that we’re full of creative people within our own culture, and we need to let our culture flow through us creatively and create original works of art. I really do believe that we have to get on the wave of just creating. We need more creative outlets and projects that stem from the Black perspective. We don’t have enough of that.”

Take actress Nichelle Nichols. One of the first female Blerds to bless our TV screens, she broke down barriers with her portrayal of Lieutenant Uhura in the 1960s sci-fi cult classic Star Trek.

When there weren’t many Black characters on TV, let alone in science fiction, she played a sci-fi heroine!

Her presence was so crucial to the culture that when word got out that she would be leaving the show to pursue a Broadway career, civil rights activist (and Trekki) Dr. Martin Luther King Jr. spoke to her personally about the impact of her performance and ultimately convinced her to stay. In hindsight, I’m glad she did.

Another example is Dwayne McDuffie.

McDuffie was a writer for comics and cartoons who formulated a team and created Milestone Media, one of America’s first Black-owned comic book publishing companies.

Milestone Media was created in the early 1990s by McDuffie and three of his partners. Its sole purpose was to diversify American comics to include characters of color, most notably superhero Static, the protagonist in the hit animated series Static Shock.

Prior to starting the company, McDuffie freelanced for industry juggernauts Marvel and DC but didn’t feel there was adequate representation for people of color, so he decided to take matters into his own hands. “If you do a Black character or a female character or an Asian character, then they aren’t just that character. They represent that race or that sex, and they can’t be interesting because everything they do has to represent an entire block of people. You know, Superman isn’t all white people and neither is Lex Luthor. We knew we had to present a range of characters within each ethnic group, which means that we couldn’t do just one book. We had to do a series of books, and we had to present a view of the world that’s wider than the world we’ve seen before.”

We’re starting to secure more seats at the table in nerd culture, but we can’t stop here. We have to keep it going. “Black Sands Entertainment — a very well-known popular established comic industry right here in Birmingham, Alabama — we need more people like that. We need to support people like you. We need to support people who are making their own way and are actually doing representation of our history the right way,” said Blerd personality host SKIP.88.

It’s not enough to make Black variations of characters and movies. We need our own characters, our own symbols, our own stories, and content that’s exclusive to the Black experience. Because it matters. We matter. “Static Shock — I’d never seen anything like that. It was wild to see the hood animated,” said Kevin Smith.

To anyone using their platform to represent this demographic of people who otherwise don’t see themselves, I just want to say thank you.

Every time you create a story, write a script, produce a show, star in a series, or voice a character, it’s a step in the right direction. “We need to start supporting each other. We gotta support our own. Support your Black local creators. Because you want more representation?! You’re killing our representation by not supporting them,” said SKIP.88.

Because of you, we’re seen, heard, acknowledged, and most importantly, represented.