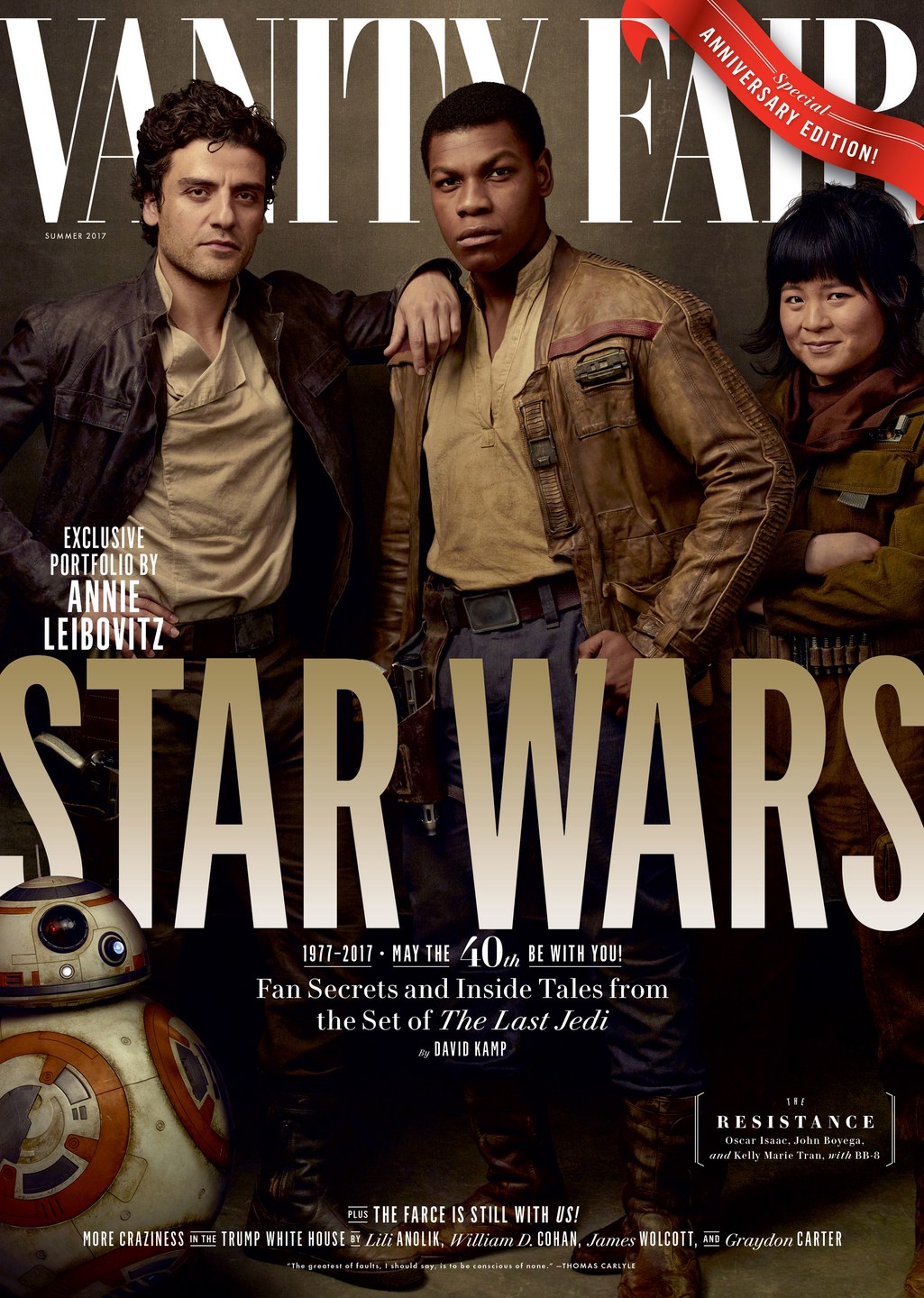 Vanity Fair released the cover images for this month’s issue. To coincide with the 40th anniversary of Star Wars, Annie Leibovitz’s gorgeous images of The Last Jedi cast adorn the covers. I know I’m not the only one who poured over the Vanity Fair cover for The Force Awakens, trying to find any clues to the movie. For The Last Jedi, we now have four covers to obsess over.

On the cover entitled ‘The Force’, Daisy Ridley’s Rey and Mark Hamill’s Luke Skywalker stand on the cliff of Ahch-To, the planet that houses the first Jedi temple. In the first teaser trailer of The Last Jedi, we see Rey training on those cliffs. Rey looks like she’s ready to meet all trouble and take it down.

The ‘Dark Side’ cover features Gwendoline Christie’s Captain Phasma, Adam Driver’s Kylo Ren, and Domhnall Gleeson’s General Hux. Phasma is helmet-less and more importantly alive. I couldn’t tell if her scene in the teaser trailer was a flashback or not. I’m hoping we get to see her without her helmet in the movie. We see a Kylo who is scared and in a new costume. I loved his original costume and was worried when they announced they were changing it. This one isn’t bad and is less ragged which probably hints that he’s no longer struggling between the dark side and the light. He’s fully committed and stronger for it. And then there’s Hux, who’s also sporting a new costume and a steely look.

My favorite cover is, of course, ‘The Resistance’ cover. BB-8, Oscar Isaac’s Poe Dameron, John Boyega’s Finn and Kelly Marie Tran’s Rose Tico adorn the cover. Poe looks good because Oscar Isaac is incapable of looking bad. Finn is awake and healthy looking, sporting a new shirt, pants, a blaster and what looks like Poe’s shirt and belt from The Force Awakens. Interpret that however you would like. I’m getting Han Solo vibes from it. Cementing her status as the new star of the movie, Rose rounds out our trio (or quartet if you’re counting BB-8). We learn Rose’s full name from this. I can’t wait to see what’s in store for this group.

The last cover, ‘The Legacy,’ features Carrie Fisher as General Leia. It’s fitting that she get her own cover. The Vanity Fair article will feature stories about working with Carrie as well as hints on Leia’s expanded role. I know I’ll cry the minute I see her on screen. The digital edition of this issue is out on May 24. For those who want the physical copies, look out for them on May 31 in New York and Los Angeles and June 6 for everywhere else.