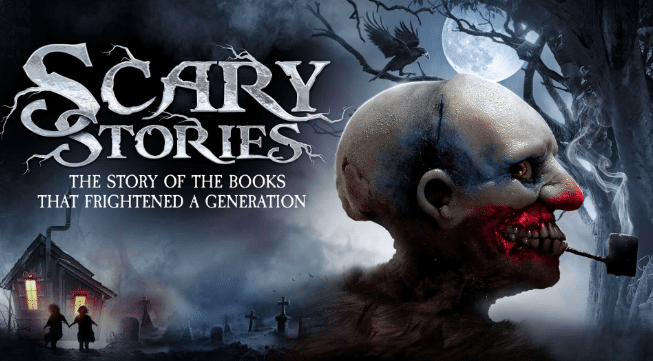 When Alvin Schwartz published the first installment of his re-imagined series of horror folktales Scary Stories to Tell in the Dark in 1981 nobody had any idea what a cultural phenomenon the book and its sequels would become for fans and critics alike.

By the time Scary Stories 3: More Tales to Chill Your Bones came out in 1991, so had Schwartz cemented his forever cult status among readers as well as demonized well-meaning parents and school administrators for his dark content. This push and pull between people who love Schwartz’s Scary Stories and those who would continue to see the books banned is explored with a loving touch in Cody Meirick’s new documentary Scary Stories.

Just in time for the much-anticipated Guillermo del Toro adaptation hitting theatres this summer, the Scary Stories documentary gives us some excellent context into Schwartz’s writing, his home life, and the controversies surrounding the proposed banning of his books. I had no idea that before releasing Scary Stories to Tell in the Dark Alvin Schwartz was actually the author of many books on parenting. According to Peter Schwartz, Alvin’s son, Alvin had a fraught relationship with his own father that was never reconciled. To make up for what he had never learned from his father, Alvin decided to at least try to be a more involved and better dad, and these attempts are documented in his non-fiction books. Seeing the man behind these beloved books through the eyes of his wife Barbara and son Peter was keen insight indeed. Not always good, but always fascinating and relevant to his work as a folklorist and author.

Alvin Schwartz was also trained as a journalist, and had a keen eye for research. He spent at least a year researching each Scary Story book, collating various myths, legends, and stories from around America and later elsewhere to re-tell in his own books in his distinct style. While the content may be grown-up — with frank discussions about death, illness, murder, and other social and cultural issues — Schwartz’s scary story trilogy is written with elementary school children and upward in mind to help them answer or further ponder some of the harder questions about life that make parents uncomfortable.

As we see in Meirick’s documentary, it is this very parental discomfort that often led to kids hiding the Scary Story books from their families and ultimately sparked the campaign spearheaded by Sandy Vrabel (now Vanderburg) to ban the books from her school’s library. After a huge to-do that went all the way up the school administrations chain of command, Vrabel’s attempt failed back then. To this day, she stands by her belief that these books are “not age-appropriate for elementary school students” and denies claims that she supports censorship. In a current interview, Vanderburg even goes so far as to say that the reason the world is as bad as it is today is because the Scary Story books were openly available for so long. Thanks for your input, Eva Braun. Go back to your bunker.

Vanderburg eventually got her wish though. The Scary Story books were not so lucky when the media-fueled “Satanic panic” began in the late 90s in earnest, and as a result Schwartz/Gammell’s works were pulled from shelves all across America.

Ironically, it was the banning of these books that only made them more precious and beloved to all those who appreciated them, and in particular, those kids who are now in their 30s and 40s who to this day treasure Schwartz’s collection. The Scary Stories documentary features dozens of interviews with lifelong fans of the books, and their passion for the stories has not abated all these years later. Full disclosure: I’m not in the documentary, but I am also a lifelong fan of the books and even have a rare hardback copy of all three books with original artwork in one glorious volume. Like many of the people Meirick spoke with, I too have memories of reading each book under the covers with a flashlight long past my bedtime. And then not being able to get to sleep after each creepy tale. So I’d keep reading. These are some of my most treasured and best memories from childhood indeed, sparking my ongoing love affair with horror and the art of horror storytelling.

Scary Story lovers are so dedicated and creative that there was even a 2017 exhibit of fan art in San Antonio, Texas in Brick at Blue Star Arts Complex that paid beautiful homage to Schwartz’s stories and Gammell’s haunting illustrations. Interviews with the various artists reveal how deeply these stories affected them for the entirety of their lives, and the complex methods they went about giving tribute to their inspirers were in turn incredibly inspiring. I also particularly loved all the various nods to the healing power of horror through these artists’ stories, but also all the librarians and social scientists whose defense of the maligned books all noted that it is healthy for children to engage with dark notions of death, disease, and other terrible things that happen in real life. When sociologists, folklorists, children’s psychologists, and family therapists among others come together to agree that Schwartz’s collection of horror tales are good for children to read it becomes a vindication of the entire horror genre.

But the Scary Stories documentary isn’t just about the books’ creators, fans, and foes. In particular, Schwartz’s son Peter has a grand personal arc that leaves us with a satisfying sense of redemption.

Meirick’s Scary Stories is also a testament to the long-standing power of storytelling, and in particular folk storytelling that comes with a parable about good (or bad) living as well as reflects different times in American history. Scary Stories features stunning animation by Shane Hunt with gorgeous nods to the original fonts and design aesthetics of the three books. Scary Stories’ fantastic gothic-inspired score by E.K. Wimmer is the perfect accompaniment to the interviews as well as the fantastic animated sequences. And Meirick’s direction in pulling together the oral history of one of America’s most banned set of books of all time.

What Scary Stories really brings home, though, is how banned books reflect the time and place of their banning. In the 1990s, with the growing terror threats and the emerging 24-hour news cycle, fears of death and murder and dismemberment were at the forefront, along with puritanical views about sexuality. Today in 2019, the current list of books under threat of banning or banned altogether focuses on LGBTQ issues as well as multicultural tales of non-white Americans. This puts Schwartz/Gammell’s work not only in a poignant historical context, but is also a powerful reminder that those who hold the power to disseminate — or block — the spread of information have their own vested interests we must always interrogate and illuminate whenever possible.

Cody Meirick’s Scary Stories is not just of vital interest to fans of the books and horror fans in general. This film is also relevant to anyone interested in American history, censorship, and freedom of speech. Ultimately this is a story about the love of reading, and the freedom to choose for ourselves which books we will and won’t read, even if some may deem us too young.