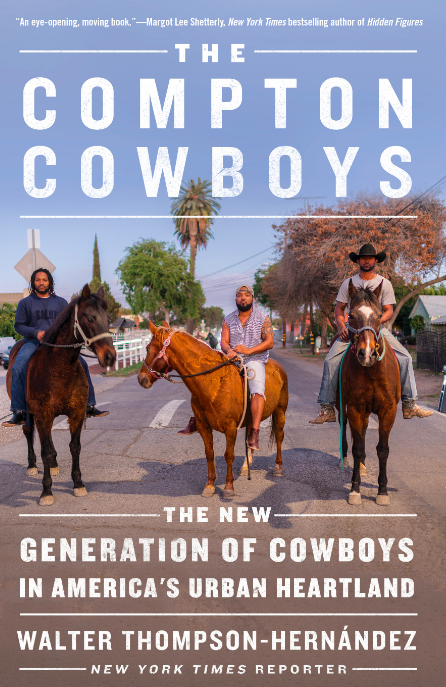 New York Times reporter Walter Thompson-Hernandez’s The Compton Cowboys is both a skilled insider’s look at a community of cowboys in the most unlikely of places and a homage to the healing power of horses.

Although in recent years Compton has become infamous for being the birthplace of gangsta rap, of homies killing homies, West Coast versus East Coast, and all the other stereotypes, before that it was once just another suburb in Southern California with tract homes and farmland. Yes, farmland.

It is to this farmland that settlers came in the mid-nineteenth century shortly after the California Gold Rush. Smaller-scale farming continued into the 1950s as Black families moved into the Richland Farms area. Approximately 20 years later, these farms began to go up for sale, plus gentrification has led to very little being left of the old ways — except for a few dedicated families that keep the tradition of horseback riding right in the middle of the now-urban city.

This is what Thompson-Hernandez explores as he spends countless days with the men and women riders who populate the ten-acre Richland Farms — a place where kids can learn to ride and former gang members can find some peace. Many of the latter are trying to stay away from their gang banging, their drugs, or other addictions.

Through 21 chapters, we meet them all as Thompson-Hernandez painstakingly documents every aspect of their lives. There’s Mayisha, the dedicated but tired manager of Richland Farms who is nearing retirement. Mayisha revitalized the idea of horse riding in Compton and convinced city officials how important the ranch was for keeping young people off the streets.

She wants her nephew Randy to manage it now, and that makes Randy nervous. Then there’s her son Rashid who’s also dedicated but can’t let go of his way of seeing things. There’s Tre and Charles who compete in rodeos but can’t seem to leave the gang member lifestyle and thought process behind.

There’s Kiera, Compton-raised and a barrel racing champion in the Bill Pickett Rodeo circuit, who injured her back, has childhood trauma, and whose brother was shot in a drive-by. Kiera is trying to get back to competing and is her daughter to love horses like she does.

There’s still others: Tre, an actual rodeo champ who has some dances with success; Charles, a young father who has dreams of being the first African-American hunter-jumper in the Olympics; Anthony, a ranch hand who rides his horse to pick up his granddaughter each afternoon at her elementary school; Kenneth, struggling with the bottled-up memories of tragedies past; and Keenan, who often takes too many risks.

Sometimes the pathos of each person’s very real struggle can read boring. (Thompson-Hernandez writes about days and days given away to drugs, alcohol, gaming, and going for fast food.) Sometimes the chapters are just long slips into mundanity.

That is until you keep reading and realize that all of these people appear to be waiting for either success or death. Death can come quickly in neighborhoods where gang violence is the norm. But death, for lack of a better term, rides with them every day, even a day that begins with a shower and getting dressed. No one goes around thinking about what they will do at the office or what time is happy hour.

By taking an approach that is both narrative and filled with intimate quotes (from taped conversations while out with the cowboys), Thompson-Hernandez writes a raw story that provides a picture of horse-loving cowboys hiding under their rough street-honed exteriors. He goes deep not only into Compton but into other neighborhoods, as close as the predominantly Black and Brown Inglewood and as far-reaching as sunny Malibu.

When you finally get back to the purpose within the story, which is how will all these personalities with all their trials and tribulations manage to keep the ranch open and inspire new generations to come and learn to ride while still making their own lives better, sometimes it all seems so bleak.

Like any good narrative story, the book has a beginning, a conflict, and an ending. However, Thompson-Hernandez’s book isn’t about a storybook big happy ending without consequences. It’s about finding shared common ground, about being positive despite the circumstances, about finding something you love and sticking to it. Good read.

The Compton Cowboys is available at barnesandnoble.com and amazon.com.