Steven Universe fans, rejoice! Cartoon Network is debuting a new show from former Emmy nominated Steven Universe writers Matt Burnett and Ben Levin called Craig of the Creek. The show follows Craig, a kind-hearted kid with stars in his eyes and adventure in his heart. He, his best friends Kelsey and JP, and the rest of the neighborhood kids created their own world in the woods near his house, and it’s fascinating to watch how the lessons he learns out there manifests in his day to day life.

I was lucky enough to chat with Matt and Ben about how the show came about — and gush about how excited I was that a show like this had a POC in the starring role!

What was the inspiration to create Craig of the Creek?

Ben: This was how we played as kids! We both grew up on the east coast, near the woods, and that was a place where there were no adults and kids could create their own world and play the way we want.

Matt: With this show, we’re really trying to capture that scale. Everything seems so big and exciting as a kid and we were trying to create that look. 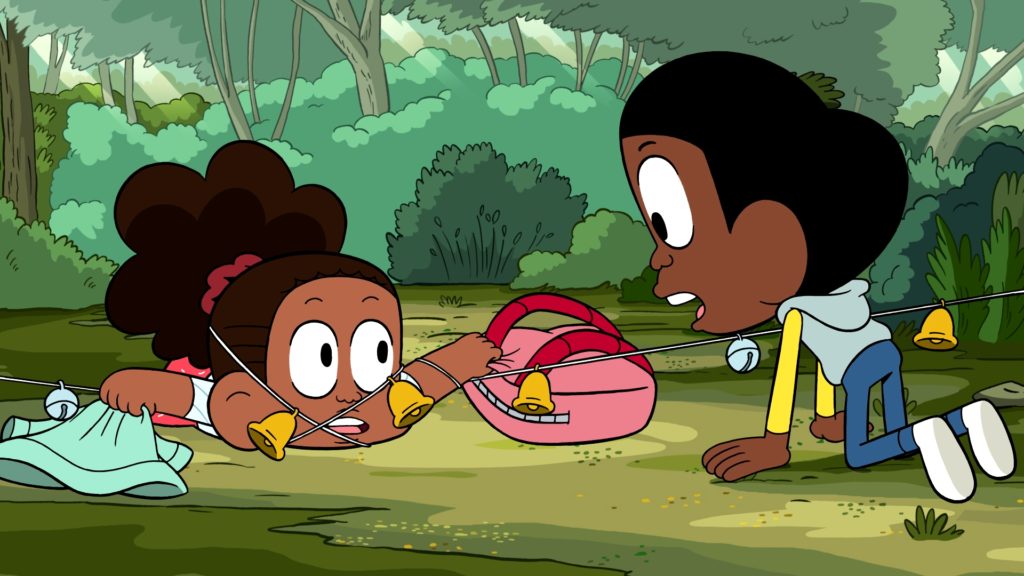 Was It hard to sell a TV show with a black protagonist to Cartoon Network? Is it generally difficult to do in this industry, in your experience?

Ben: We just wanted to use this opportunity we had to do something progressive, something new. We have the privilege to communicate with this television network, so let’s use this chance. And Cartoon Network has been very supportive about it.

Matt: We’ve been very supported throughout the process. I have to say, the landscape of kids TV is changing. A good example is Steven Universe; the representation that show strived for, we tried to emulate that.

Are there any differences writing for this show as opposed to writing for Steven Universe?

Ben: Yes there’s a difference because this show is grounded in reality. SU is about magical beings and they can do stuff we can’t. There are no monster attacks in Craig of the Creek. We try to start from more of a grounded place. An example would be how we came up with the premise behind the episode “Itch To Explore” — I went to camp with a kid who said he was immune to poison ivy, and then I never saw him again.

Which character did you have the most fun writing?

Ben: They’re all fun to write! But what I love about Craig is that I’m horrible at building things, and it’s fun to imagine him building stuff I can never do.

Matt: JP is a very easy joke machine for writers. He’s a character that could always be there with a one-liner. But he’s also such a sweet kid! Marches to the beat of his own drum, but such a compassionate kid.

Matt: Those cartoons we animated in Queens, those animated shorts we did to get noticed—those are the same characters! It was amazing that we got to bring them back for this show.

Was it hard for you to leave Steven Universe to create this show?

Ben: Yes, but we were on SU for five years, for half a decade!

Matt: It was really tough to leave that show! But it felt nice to be able to write on it as long as we did.

Watching this show I’m strongly reminded of Recess! Was the homage deliberate?

Matt: Yes, Recess was awesome! This was like Recess in the woods. Goonies. This idea that this is the real world, but something cool could happen in it.

What advice do you have for people trying to make it in the animation industry?

Matt: It’s very important that you figure out how to make stuff on your own! The way that Ben and I really got into it was after college, we decided to do some comedy stuff together and wrote an animated short and we put it on YouTube and it got some attention. We made more stuff independently, and when we got to LA those shorts came as our calling card.

Ben: Yeah we get that kind of question a lot. It all comes down to this: make stuff, and learn how to become a storyteller.

I’ve watched the first few episodes of this show and they’ve definitely got a new fan in me! Craig of the Creek has some fantastic world-building, interesting episodes, and humor that both kids and adults can enjoy. New episodes — five of them — are available now on the Cartoon Network app and on demand, with a new episode airing live tonight, Monday April 2, at 7:00 pm; I highly recommend you download and watch!