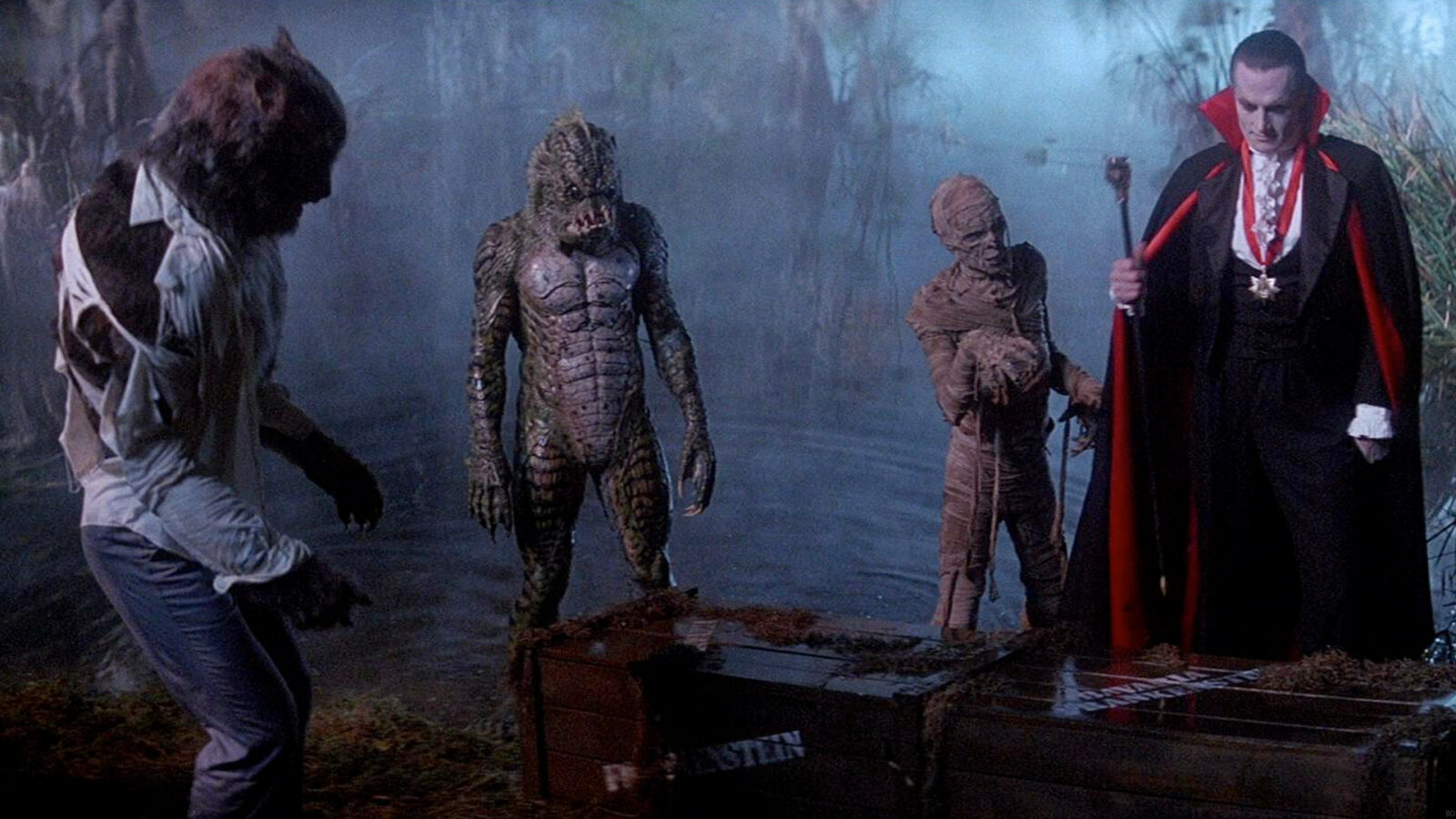 Since its release in 1987, The Monster Squad has steadily become a horror classic. Inspired by their love of the Universal Classic Monsters, writers Fred Dekker and Shane Black set out to make a Spielberg-like kid version of Abbott and Costello Meet Frankenstein. The resulting film blends comedy, horror, and adventure with ’80s flair.

A group of pre-teen misfits — Sean (Andre Gower), Patrick (Robby Kiger), and Horace (Brent Chalem) — bond over their love of horror movies. Rudy (Ryan Lambert), a cool junior high kid with a ’50s greaser style, also joins the club. Sean’s little sister, Phoebe (Ashley Bank), desperately wants to be a part of the club, but it’s boys only, of course. However, sometimes Eugene (Michael Faustino), who is likely only a little older than Phoebe, gets to tag along.

Their kids’ horror knowledge comes in handy when monsters invade their town in search of a powerful artifact. Club leader Sean comes into possession of the diary of legendary monster hunter Dr. Abraham Van Helsing (Jack Gwillim). With the help of the neighborhood’s Scary German Guy (Leonardo Cimino), the team is able to translate the diary and learn more about an ancient amulet.

Scary German Guy, who is actually a kind man, says that he “has some experience with monsters.” It’s revealed to the audience that he has a number tattooed on his arm, meaning he’s a Holocaust survivor. Quite dark for a movie targeting kids, but it’s never addressed so we’re just left to sit with that.

Count Dracula (Duncan Regehr) is hellbent on retrieving the amulet, which would give him the power to rule the world, because that’s what every villain wants. He forms an army of monsters to help him, including the Wolfman (Jon Gries/Carl Thibault), the Mummy (Michael Reid MacKay), Frankenstein’s Monster (Tom Noonan), and the Gillman (Tom Woodruff Jr.), who was obviously modeled after the eponymous character in Creature from the Black Lagoon.

Regehr’s interpretation of Dracula is considered one of the best in film/TV history. He plays Dracula as very serious and malevolent. He’s not sexualized or charismatic, which are usually staples for the character. Tom Noonan as Frankenstein’s Monster plays to his more innocent aspects. He forms a sweet bond with Phoebe, which in turn allows her to join the boys’ club. These are the only monsters who have any personality. The other three kind of just do what they’re told. I’m not sure what purpose the Mummy serves, but he’s pretty scary to look at.

The Monster Squad doesn’t seem like it would be a well-made film with high production value. The film’s biggest strength is its special effects. The monsters look fantastic thanks to the Stan Winston Studio and its expert artists. Universal wouldn’t license their monsters, so the art department was tasked with making creatures with a likeness to the classic monsters.

Like most cult classics, The Monster Squad bombed in theaters, likely due to the poor marketing. Opening two weeks after The Lost Boys didn’t help either. It was also a bit confusing that it seems like a kids movie, but is rated PG-13. It took the film years to build a fanbase. Thanks to cable television and VHS rentals, it reached a wider audience. The resurgence is owed to its diehard fans, who campaigned for a DVD release and got it.

Some aspects of it don’t hold up for a 2021 audience. It’s not Revenge of the Nerds-level bad, though. There are some homophobic slurs, slut-shaming, and fat-shaming, which isn’t surprising given it’s an ’80s movie. Those instances will make you cringe, but that doesn’t make it less entertaining. Just don’t expect it to pass the Bechdel test, or the DuVernay test for that matter. The only Black character is Detective Sapir (Stan Shaw), and he’s only there so Sean’s dad, Del (Stephen Macht), has someone other than his family to talk to.

Lisa Fuller, who plays a teenage girl and has enough scenes in the movie to warrant a name, is simply credited as “Patrick’s Sister.” Scary German Guy has a pivotal role, yet we never learn his real name. However, if you see it from a kid’s point-of-view, you don’t really care about actual names. You call them what you call them, especially your friends’ siblings.

There are plenty of logical flaws (that the filmmakers and cast are completely aware of), like, why did the Mummy randomly hide in a kid’s closet only to do nothing and then leave? Where did the Desperate Man (aka the human who turns into a werewolf) come from, and who bit him? Why does a vampire go around tossing dynamite when he possesses otherworldly abilities? So many questions. But do we need the answers? Not really. Horror asks you to suspend belief and that’s definitely necessary here.

The Monster Squad is not a perfect film, but it’s an enjoyable one. It makes me nostalgic for a time I didn’t even live in, which I think is effective. If you can avoid viewing this 1987 film with a 2021 lens, you’ll have a good time watching it. You also can’t put too much thought into the nonsensical plot. Laughing at its ridiculousness is part of the fun.

The Monster Squad is available to stream on Amazon Prime Video, Paramount+, and for free on YouTube.