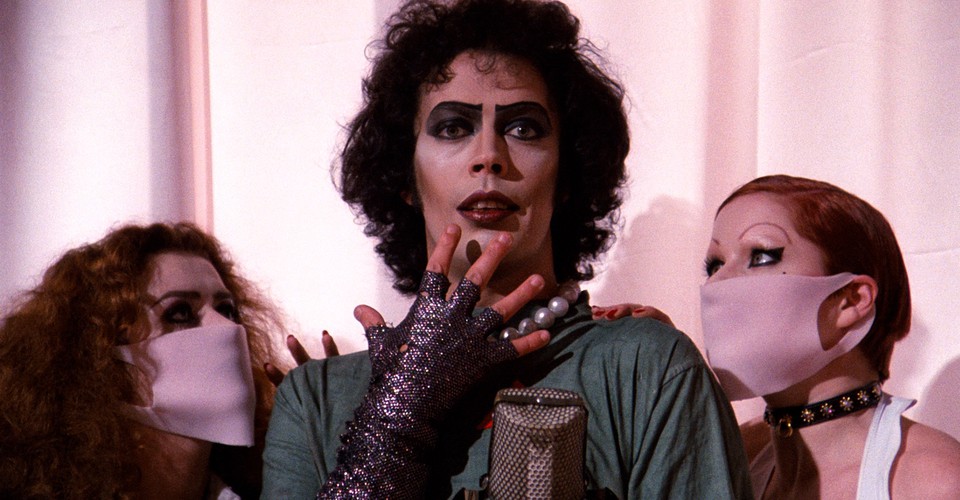 The first non-animated movie I remember falling in love with was The Rocky Horror Picture Show. Even at four years old, I felt an odd connection to the characters and storyline — two people taken out of their comfort zone and thrown into this bizarre world of sex and violence. In the midst of this madness, they find their true selves. This is how I felt when I watched the film.

Of course, I didn’t fully understand the sex and violence aspect, but I realized how amazing it is to be different. I was discovering myself, even at such a young age. Though I could’ve just been fascinated by the sparkly costumes and killer music.

The Criminologist (Charles Gray) acts as our guide, narrating the strange journey that we, along with Brad and Janet, are about to take. On the way home from the wedding, the young couple’s car breaks down, leaving them stranded on a dark road in the middle of a downpour. Despite Janet’s reservations, they walk to a castle (a.k.a. the Frankenstein Place) hoping to use their phone. They’re welcomed inside by an unsettling servant/handyman and find themselves entering a bizarre world of eccentrics dancing the “Time Warp.”

After said handyman, Riff Raff (Richard O’Brien), his equally subservient “domestic” sister Magenta (Patricia Quinn), the glittery groupie Columbia (Nell Campbell), and all the wacky Transylvanians finish their epic performance, Janet is ready to get the hell out of there.

Before she can convince Brad to leave, Dr. Frank-N-Furter (Tim Curry) makes his grand entrance in a fabulous vampire cape, introducing himself via song as a sweet transvestite from Transsexual Transylvania (a song that my mother warned me not to sing as I began preschool). Frank is truly a sight — sparkly corset, black stockings, sick platform heels, and little else.

The shocked couple are stripped of their clothes and led to Frank’s laboratory: a room designed almost like an operating theater. The night’s celebration culminates in the reveal of the mad scientist’s creation, a handsome, muscled blond named Rocky (Peter Hinwood). He’s bandaged up like a mummy but is quickly unwrapped, revealing his tiny gold shorts and boots.

Eddie (Meat Loaf), Frank’s former delivery boy, disrupts the party by driving his motorcycle through the lab, dancing around with Columbia, and playing the hell out of his saxophone. An angered Frank-N-Furter comes after him with an ax, which becomes a minor inconvenience in the night’s festivities.

Later, Dr. Everett Scott (Jonathan Adams) arrives at the castle. Oddly enough, he’s Janet and Brad’s former science teacher who now investigates UFOs and happens to be looking for his nephew, Eddie. He knows Frank and his crew are up to something, and he’s determined to figure out what.

Rocky Horror began as a stage show at the Royal Court Theatre in London in 1973. Its success caught the attention of Hollywood producers, and Richard O’Brien landed a movie deal. Not only did O’Brien write the stage play, the screenplay, and act in both productions, he also wrote the original music — a blend of pure rock-and-roll, haunting piano, and absurd lyrics. The film premiered in 1975, but it did not do well. As with most, if not all midnight movies, Rocky Horror was a flop.

Tim Curry as Frank-N-Furter is as alluring as Dracula and as mad as Dr. Frankenstein. He isn’t necessarily a monster but more of a gorgeous, abnormal being — beautiful yet terrifying with eyes wide with thirst. His face painted white intensified by black eyeshadow and blood-red lips, courtesy of makeup artist Pierre La Roche, known for his work with David Bowie.

The cultural impact of Rocky Horror exceeded expectations. Its devout fan base made it a cult hit that continues to have weekly midnight screenings around the globe, making it the longest-running theatrical release in history. Shadow casts reenact scenes as the film rolls. Audiences bring or are provided with props to use during the screenings. Seeing Rocky Horror in theaters is an immersive experience that’s become a rite of passage.

For many, Rocky Horror represents freedom from societal norms in terms of sexuality, gender, and identity. It’s a film for outcasts with Dr. Frank-N-Furter embodying the “other” — an outsider, a transvestite, an actual alien from another planet.

The Rocky Horror Picture Show is streaming on Hulu, Amazon Prime Video, and might be playing at your local theater.