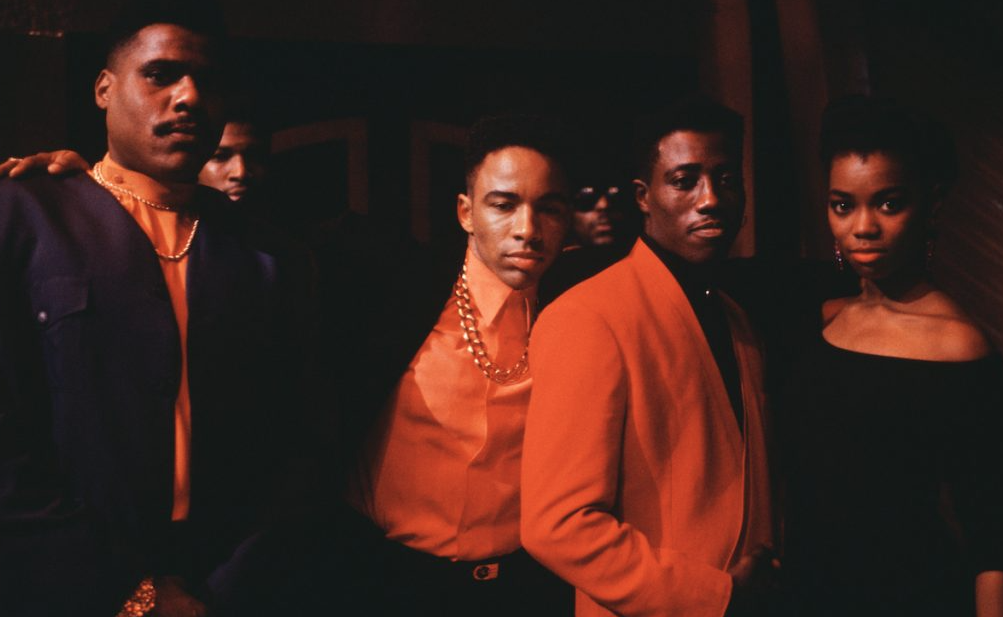 It feels only appropriate that we compare 1991’s New Jack City to 1983’s Scarface.

Both are about ruthless drug lords running their respective criminal empires like a czar. Both highlight the riches gained through narcotics trafficking while showing the personal cost to those making money off misery. Finally, one seems to be a response to the other.

Nino Brown — played by Wesley Snipes with a shockingly potent admixture of narcissism, cynicism, and only the slightest hint of regret — watches the film almost religiously in his free time. When he’s not menacing and mangling other drug dealers, he’s quoting the Brian De Palma film with the reverence of an acolyte. For Nino Brown, the Scarface script might as well be a liturgy.

The comparison works on another level. It seems that writers Thomas Lee Wright and Barry Michael Cooper, along with director Mario Van Peebles, wanted something more realistic than the stylized glitz and glamor of that earlier film. Rather than basing the screenplay in part on a 1987 Village Voice article by Cooper, these three wanted something more true to life. It appears that they wanted a film that, rather than glorifying the gangster, instead opts to show the lives he destroys with his product and the people closest to him whom he alienates. They show not just the criminal, but the cops after him and their motivations for getting him off the streets.

In all, they partially achieve these goals.

While the film does opt toward a more realistic approach than Scarface, it does tend to fall into action movie clichés every now and then. For example, the scene where Kareem Akbar (Christopher Williams) recognizes Ice-T’s Scotty Appleton as a police officer devolves into a shootout that sees Nino Brown going from above-average drug dealer to Special Ops assassin skilled in the art of covert maneuvering. It takes the audience out of the film’s “realism” when things get that fantastic.

Elsewhere, the realistic tone is at times sacrificed to make a message crystal clear. I’m thinking here of the scenes where Pookie (Chris Rock) relapses and gets hooked on crack again. There is a literal storm going on outside while he smokes crack again. I understand the message, but some nuance would have been nice.

However, this is not to say that the film doesn’t feel terrifyingly real.

I loved the scenes of Pookie first getting clean after, like many addicts, initially eschewing recovery. Even when the music behind these scenes made them feel a bit schmaltzy, the Narcotics Anonymous segment with actors Tina Lifford and Kelly Jo Minter saves the sequence. In fact, Lifford and Minter as two women in recovery nearly steal the show. Go back and watch this scene. Notice how director Van Peebles doesn’t ask for grandstanding from his actors; what they give us instead is the quiet shame of addiction. The audience, Pookie, and Scotty are all witnesses to the painful vulnerability that is a key ingredient to beginning recovery. It’s an amazing thing to behold.

The film’s realism shines elsewhere when the audience sees the very real spoils of dealing. Nino and the rest of his Cash Money Brothers crew ride around in Jeeps sporting Kangos and rope chains. They laugh hard and deep at life and the law. As Nino makes clear in his courtroom tirade, a lot of young Black kids, especially at the time of the film’s setting, have nothing more than hoop or hood dreams to get out of the projects. Like the boys in Cooper’s 1987 article, Nino and his crew expect to die, so they plan on living life to the fullest in the meantime. And if this means making some other people check out early, so be it.

I wrestle with the idea of calling New Jack City a realistic film because it is clearly very stylized. There are multiple shootouts with police, the mob, and other drug dealers. There are the myriad Dutch angle camera shots of Nino’s crew meeting and elsewhere that become more distracting than anything. There is the ending where, instead of having the audience face the horror of a judicial system that, by letting Nino off lightly, falls short of being a Justice system, we see the villain get his comeuppance moments after his convincing — if self-serving — speech about the opportunities available to young, poor Black men.

When the movie has Nino killed by the Old Man (Bill Cobbs in a role credited as “Old Man”) it cops out. It gives the audience not only hope that the problem will fix itself, but it also trafficks in punitive imagery, insidiously implying that drug dealers deserve death. Rhetoric like that is what leads to draconian crime bills and politicians referring to Black and brown teens as “superpredators.”

In all, I loved New Jack City. While there are those like the American Cinematheque that refer to the movie as being a part of a 1990s Black realism movement in film, I partially disagree. I see this film more like a surrealistic film with a message.

The message, yes, is “Crack Kills,” but it is also that discrimination kills. Hatred of one’s self — and therefore of everyone around you — kills. A lack of opportunities beyond one’s block kills. Hopelessness in the youth kills.

The film makes all this apparent. It just doesn’t do so subtly. And, to be honest, I’m largely fine with that: a drowning man doesn’t have time to be coy. But there are times I wished the film had more appreciation for the audience’s intellect. We don’t need to be spoon-fed the answers. By showing, rather than telling, us the problems, we will intuit the answers. Again, it may be that understatement is the privilege of those not in dire circumstances, and I understand that.

However, for a film that apparently wants to be the realistic counterpoint to Scarface, there are many moments that feel as bombastic and playfully preposterous as that 1983 classic. Hell, the main antagonist even gets shot and falls over a banister in the same way. All that’s missing is the gaudy fountain and several Columbian hitmen.

Still, I appreciate this film for what it attempts to do. It shows us why someone becomes a trafficker, how someone becomes an addict, and why some cops might take capturing dealers seriously while those from nicer neighborhoods believe it not to be their problem.

The messaging is clunky and overstated at times, but the heart is in the right place. For that, New Jack City deserves its due.

American Cinematheque is having a showing of New Jack City Saturday, April 9, 2022, in Los Angeles. Tickets can be purchased via the hyperlink.