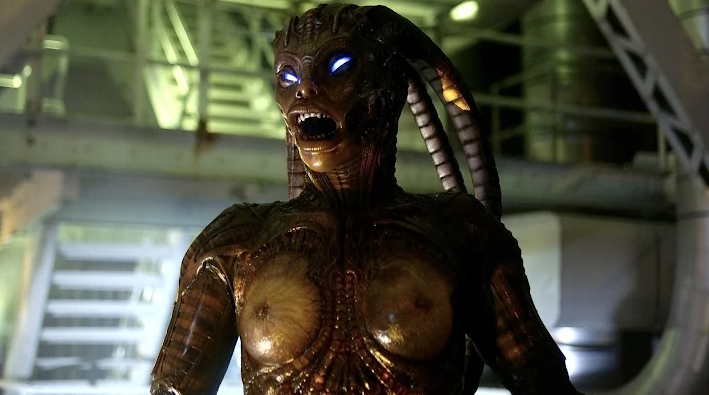 Somewhere in 1995’s Species is a thought-provoking sci-fi film.

Somewhere within it, there is a film about the ethics of human experimentation, as evidenced by scenes where the crew tasked with finding the alien/human hybrid Sil (Natasha Henstridge) argue that she’d be less antisocial were she not raised in captivity surrounded by dispassionate scientists.

Somewhere deep in its core is a movie about how, if a murderous alien has taken the form of an attractive white woman, she will be given the benefit of the doubt by most human beings. Shopkeepers won’t find her mannerisms suspicious; they’ll ask her if she’s “foreign” (and, to be fair, she kind of is).

The film also has traces of commentary concerning rape culture, competition among straight women, and the problems with gender essentialization.

What Species mostly consists of, however, is a lot of great gore, amazing creature design by H.R. Giger, and the strangest, most confusing character for a government-appointed search-and-destroy mission to have: the kufi-rockin’ empath Dan played by Forest Whitaker.

Seriously, I’m not sure if the Dan character is meant to be a parody of law enforcement utilizing psychics in missing persons and homicide investigations or a sincere attempt at portraying their usefulness due to presumed connection to the Other Side. Regardless, Forest Whitaker plays the role straight.

Whitaker never betrays a sense of irony when purportedly clairvoyant Dan provides beyond-obvious commentary. For example, “she didn’t like that” (referring to Sil being raised in near-total isolation). Or when the psychic can’t tell that the Long Island Ice Teas he’s been drinking are alcoholic. At the very least, head scientist Xavier Fitch (Ben Kingsley) seems fed up with Dan by the end and presses the seer about something simple: which way did Sil go? Dan, unfortunately, doesn’t know.

Speaking of Mr. Kingsley, the film’s earlier mentioned potential may be why it has such a stellar cast.

I wish there were a documentary about the making of the film. I would love to know how they got Forest Whitaker just a few years after being in the Oscar-nominated The Crying Game to agree to this. I would risk life and limb to learn how and why Ben Kingsley’s team felt this would be the next logical step in his career after starring in both Gandhi and Schindler’s List, the former of which earned him an Academy Award for Best Actor.

Could it be that there was a script he read that didn’t make it onscreen? I mean, Michael Madsen playing contract killer Preston Lennox is one thing. He’s used to playing tough guys in elevated B-films. But Alfred Molina? Granted, this wasn’t Molina post-Boogie Nights, but still.

Maybe it’s because these then-current and future stars saw this same potential buried underneath the, at times, schlocky script.

Then again, everyone needs money, and I think even Oscar-caliber actors have to say yes to a bad script every now and again.

Despite all this, however, I love this movie.

It’s bad, but it’s not terrible. It has everything you love about B-movies including the evil scientists, a government cover-up, and a stoic badass with an impossible name (Preston Lennox? It belongs in the same echelon as John Matrix and S.D. “Snake” Plissken). At just over ninety minutes, Species never overstays its welcome.

It ends up knowing exactly what it is — a good Bad Movie — and it plays to its strengths. The horror elements are top-notch, and Natasha Henstridge is great at playing a character as aloof and calculated as any iteration of the Terminator. As a model with little previous acting experience at the time, Henstridge benefitted from playing a character we believe would often be stiff and uncomfortable.

Like Schwarzenegger playing the T-800, Henstridge delivers lines like “Don’t go. I want a baby”” with an uncanny directness. But where Henstridge’s character Sil differs from the murderous cyborg is that, for her, murder is not a mission priority, but instead an unexpected consequence.

That doesn’t mean she feels conscientious about killing, mind you. She simply doesn’t feel anything about it at all. Sil cares about making a baby, and it’s hilarious to see how she goes about trying to do this, from awkward attempts at flirting in the club to literally leaving her competition feeling spineless.

For these reasons, Species is great horror, wonderful suspense, and the design work, especially the surreal dream sequences, is some of Giger’s best work since Alien. It’s worth it to watch if only to see Ben Kingsley do acting work that I’m not sure is fair to call “phoning it in,” but it’s certainly in that ballpark. Still, Babe Ruth on an off day is Babe Ruth, and it’s nice to see the greats work.

Forest Whitaker is, well, God bless him, doing his best with the material he’s given. He proves once again the consummate professional actor whole-heartedly surrenders themself to the material, despite the more cynical ones of us wanting certain roles to be played with ironic distance.

I highly recommend Species, and I’m not quite sure why. It’s not good, but it’s amazing. The characters are dumb, but the actors are outstanding. The material is smart, but it’s so damn stupid. In the end, you find that watching this movie requires an act of self-effacement similar to what actors do: don’t go in judging, just go along for the ride.

If you turn off your brain long enough, dismiss the more preposterous aspects of it, and even disregard the eugenics-y angle of casting a Nordic actress as the height of genetic superiority, you’ll find that Species is just dumb enough to love. You won’t learn a thing, and you’ll wonder what could’ve been as far as the script’s intelligence goes, but you’ll have fun. With Good Bad Movies, that’s all you really ever need to ask for.

Species is available to stream on YouTube Movies, Amazon Prime Video, and the Roku Channel.