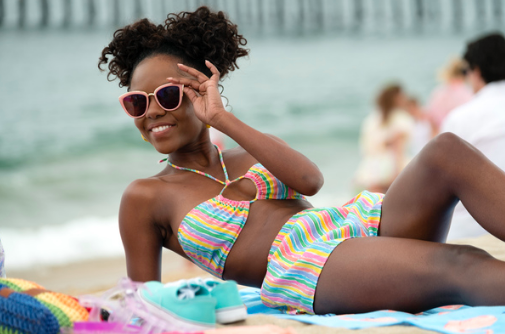 You’ve seen her channel the classic Archie’s comics vibe through her band Josie and the Pussy Cats on the CW’s Riverdale, and venture on to star as Josie McCoy alongside Pretty Little Liars’ Lucy Hale on Katy Keene.

Now, catch Ashleigh Murray take on one of her biggest roles yet as she stars in the film Valley Girl playing Loryn.

Valley Girl, which is also a remake of the classic 1983 film, is a musical comedy that tells the tale of a Julie (Jessica Rothe), who, despite the pressures from her family and friends, begins to shed her valley girl image when she falls hard for a punk rocker named Randy (Joshua Whitehouse).

In this film, Murray enjoyed everything ’80s, from the wardrobe to the music to the overall vibe, and Black Girl Nerds got to hear the details of her experience on set.

Tell me a little bit about your character Loryn.

Boy crazy lover of dance, that’s pretty much all she is. She’s kind of like this bright-eyed kid that hasn’t been tainted so much by the world. She just loves clothes, loves music, loves the boys, and they love her.

What was your experience working on a remake version of this popular 1983 film? How did you prepare for this role?

You know, I didn’t even know that it was a remake. I knew that it said remake on the audition but it didn’t register. I didn’t realize that there was an original Valley Girl. When I got the audition, I was still shooting Riverdale. We were towards the end of the first season. We were all in Vancouver, and we had self-tape auditions from time to time, this audition came through and I was like, “All right sure, I’ll do it. That sounds like fun. I’ve never played anybody like that before.” I honestly didn’t expect to get it. I really wanted to because the idea of running around in neon leotards and leg warmers and high-top Reeboks is kind of who I am. So when this came along, I just sort of went with it. I didn’t really prepare too much because we didn’t actually have to sing. At least, I didn’t have to sing for the audition. There were only three short scenes, and that was pretty much it. It was just like any other audition. I truly don’t expect much from anything, I just sort of do it and have fun and hope for the best.

There are various musical numbers in the film. Can you talk a little bit about the music and choreography?

So our lead choreographer was Mandy Moore, who choreographed La La Land, and her partner Scott was also there helping us with the choreography. I actually saw La La Land without any context. I had no idea what it was about. It was just out and everybody was talking about it. Me and Hayley, one of the other girls from Riverdale, had gone to see it in Vancouver, and after I watched it, I was telling her, “Oh my god, I loved that movie! What I would give to be in a musical movie. The way that opening sequence was made, and all those dances — why did I stop taking dance?” I was just like, “I wish I could do that.” I didn’t know that the Valley Girl audition was going to come up. I didn’t know that I was going to book it, and the same choreographer was going to be doing that movie, which was really great.

When we got to LA we had a month of preproduction. We had dance rehearsal pretty much every day for a month to get us prepared for the sequence numbers. The thing about making a movie like this, we had a very short schedule. We only shot it for about six weeks. Being on location and having things change as you go, half of the choreography that we learned we ended up not using. Thankfully, we had such powerful choreographers they were able to think on the fly and give us something different to do, not just us but all of our background dancers. I remember the scene between the four of us girls where Julie comes and tells us that she’s gone on a date and we’re all in the workout class. That took 15 hours, just that scene. It was a very long day. We were dancing non-stop for 15 hours. The fun thing was that was my favorite outfit the entire movie, but all of it was rented. That was also my favorite dance sequence. It was also the easiest one for me to learn. I’m pretty adept when it comes to dancing. I’m not a trained dancer by any stretch of the imagination. So I tried very very hard when it comes to this movie.

What can viewers expect to see when it comes to the cool 80s fashion in the film?

They are actually going to see some stuff that they’ve probably already bought and didn’t realize it was the ’80s. I’m talking about people who haven’t been on Planet Earth long enough to remember the ’80s. Fashion recycles. History repeats itself in every form of life and especially in fashion. So they’re going to see the different types of denim. The only thing that they probably won’t see that much are the swimsuits. I wasn’t actually prepared for the type of swimsuits people really wore in the ’80s. I think it might also inspire them to actually want to wear some of this stuff. My second favorite outfit is the terrycloth two-piece that I wear. I don’t remember where we see it, but it’s in there somewhere. I freaking love that thing. They are going to see the high-top Reeboks, and they’re going to be able to relate to that. People still wear leg warmers. That was part of my attire when I was 19 and just moved to New York for college. They’re going to see stuff that they recognize and probably stuff that they’d want to try. I don’t think the big tight curls are going to come back, but I think they’re going to find some familiarity and fun with it.

What was your favorite part of working on this film?

I’d say the dancing and the connections that I made. I’m still really close with Chloe [Chloe Bennet who plays Karen] and Jessie [Jessie Ennis who plays Stacey]. They became really good friends, and we still keep in contact. I really do miss the leg warmers. I love leg warmers and Reeboks, I miss it so much. The dancing was a lot of fun because it’s challenging. I’ve always been self-conscious because I’m long and lanky but still tiny, and I’ve always felt really awkward. Scott and Mandy were supportive and understanding and knew how to talk to people, especially myself, who have the natural ability to dance but are too afraid to embrace that movement. They were really really wonderful about that.

So you’ve starred in productions like Riverdale and Katy Keene. How was this production different from other productions you’ve acted in previously?

Making movies is very, very different from television. There are similarities in that it does move fast. I have yet to be lucky enough to be on a movie set that shot longer than six weeks. I know those types of things exist, but I haven’t experienced it. So the fast pace is similar between the two. On television, it’s very much like a machine. There were times when we were shooting three and maybe four episodes at once and trying to hop around from set to set and from viewpoint to viewpoint without having actually completed an entire episode yet. It was very different because we had time on movie sets to really divulge what we wanted out of a character and a little bit more space and room to sometimes rehearse and work things out with directors in a way that’s kind of unrealistic on TV.

Viewers can catch Valley Girl on Digital for streaming.