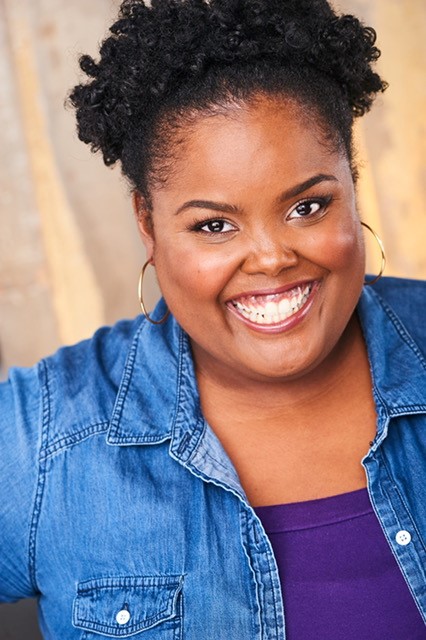 You’ve heard the saying, “TV cameras add 10 pounds.” Actress, playwright, and body positivity activist Danielle Pinnock is losing those stereotypes. Pinnock has appeared on hit shows like NBC’s This Is Us and ABC’s Scandal/How To Get Away With Murder crossover event. Pinnock currently has a recurring role on CBS’ Young Sheldon. I spoke with the married actress about being a plus size actress and woman of color in the entertainment industry and overcoming her own issues with body image. 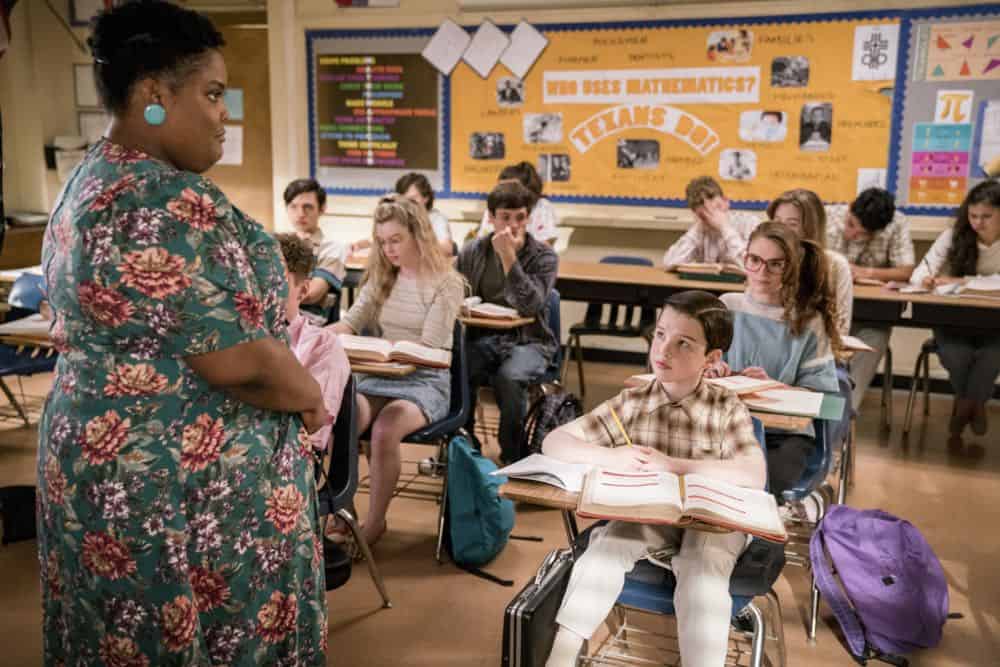 Lisa D. DeNeal: Let’s start off with you giving Annalise Keating a press and curl before her epic read battle with Olivia Pope!

Danielle Pinnock: (Laughs) Yes! It was definitely life-changing. Kerry Washington and Viola Davis are living legends. They are everything and more, and both are on my vision board. It was surreal to just be in the same room with them and acting in that scene on Scandal, which I’ve watched since the beginning. It was one of the biggest moments in my career to date.

Lisa: And now, you have a recurring role as “Ms. Ingram” on Young Sheldon, a prequel to The Big Bang Theory. How did that happen?

Danielle: It was pilot season, so I auditioned for 20 projects and was feeling discouraged. Then my manager called and asked if I could be at CBS for a reading. He sent me the script and I showed up and read a part. Then I was told a new character was created and asked to read. I learned the lines, came back and read them, and literally three hours later I got the part. I honestly did not know what the show was because it was so secretive! I did not find out until the next day at a table reading and The Big Bang Theory and Young Sheldon creator Chuck Lorre, the show’s star, Jim Parsons, some of the writers and Ian Armitage, who would play nine-year-old Sheldon Cooper were in the room. That’s when it hit me. It has been a blessing because this was my first guest starring role. Children fans of Young Sheldon approach me at Trader Joe’s, call me Ms. Ingram, ask math questions and ask about Sheldon!

Lisa: What do you love about playing Ms. Ingram?

Danielle: She’s a mathematician, a teacher, and a Black woman. And I loved that they were seeking a person of color for that role. I have an aunt who is an engineer. It’s inspiring, like Hidden Figures, which I love. We can play complex roles!

Lisa: Yes, and not just the cliché, best friend.

Danielle: Right! I have not played the best friend, yet, but I know I will at some point. My first role was on, This Is Us and I was a weight loss group member. I’ve auditioned for occupational types like nurses, a truck driver. Hollywood is changing slowly but surely. For Kerry to be the first Black actress to lead a series in 40 years, it opened the floodgates. But I really have to give credit to the writers, like Shonda Rhimes, who have fought to put us in the forefront of shows for major networks. We need more writers because what happens in those networks is that a lot of the writers’ rooms are very, very, white and they’re trying to write a Black character and no one Black is there to tell them, “no, that is not how it goes.” But diversity is growing. ‘This Is Us’ has Black writers and it’s wonderful. With young writers like Issa Rae, it gives me encouragement that in five years, I won’t have to play the maid.

Lisa: How long have you been acting?

Danielle: I’ve been acting for 20 years, but professionally for 10. I was doing theater for 10 years in Chicago, Philadelphia and the U.K., and did comedy with Second City in Chicago. I loved doing theater, but I only started auditioning for television a year and a half ago. Even though I was on stage, I felt safe because there’s something about being on TV and millions of people can see you. In theater you may have, 100 people watching you and a larger theater, maybe 1,000. I was terrified of what would be said about my size on social media. My agent said I should just try and be brave, and my third TV audition led to a screen test for a project for HBO, and they flew me out to Los Angeles. I felt like I needed to move to L.A. and it was the best decision I made. 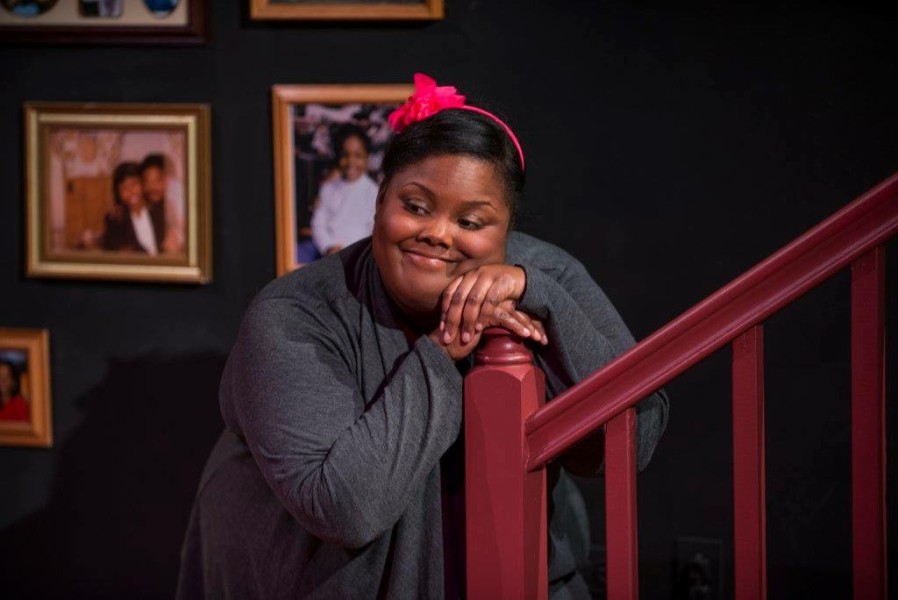 Lisa: Tell me about your one-woman show, Body/Courage.

Danielle: It started as a dissertation for my Masters in Acting while attending Birmingham School of Acting (now known as the Royal Conservatory of Birmingham) in the United Kingdom. We had to do a show about something that affected our lives. I interviewed hundreds of people and put together a documentary play and after presenting it in school, it took off. I brought it to New York and I was doing interviews about the show then my husband and I moved to Chicago and shopped around until we connected with the Rivendale Theater Company. I interviewed five women about how they felt about their bodies – a Muslim woman who has her freckles surgically removed; a pageant queen, a trans doctor, a domestically abused burn victim and a plus-size actress. The latter was my story.

Lisa: So, what’s your story of overcoming body issues?

Danielle: I chose to do a show on body image because it affected my family. I come from a huge, Jamaican family. My grandma would buy clothes five sizes too small to encourage me to lose weight and I was constantly on a diet with my mom. Mom was an extreme dieter, she tried every fad out there. So, to have a mother/daughter relationship, dieting together was our thing. I was a chubby kid. In Jamaica, people say what’s on their minds, like, “oh, you’ve gotten bigger.” But it’s said, “out of love.” I have women in my family who have had eating disorders and fought to keep it private. It wasn’t until I was older that I learned how to eat properly.

Danielle: But, even at my smallest, I still felt like I was too big. I once went down to 140 pounds and still felt like I needed to lose more. I would lose weight and gain it right back because of the fad diets.

Lisa: Any plans on developing a movie adaptation of Body/Courage?

Danielle: I want to bring the play to L.A. We’re in the process of looking at locations and I have to tweak it because, of course, some changes have happened.

Check out Danielle’s Instagram page, Hashtag Booked, a series of comedy skits with friend and actress LaNisa Frederick. Her Twitter page is @bodycourage.

Lisa D. DeNeal is a freelance writer, author, and native of Gary, Indiana