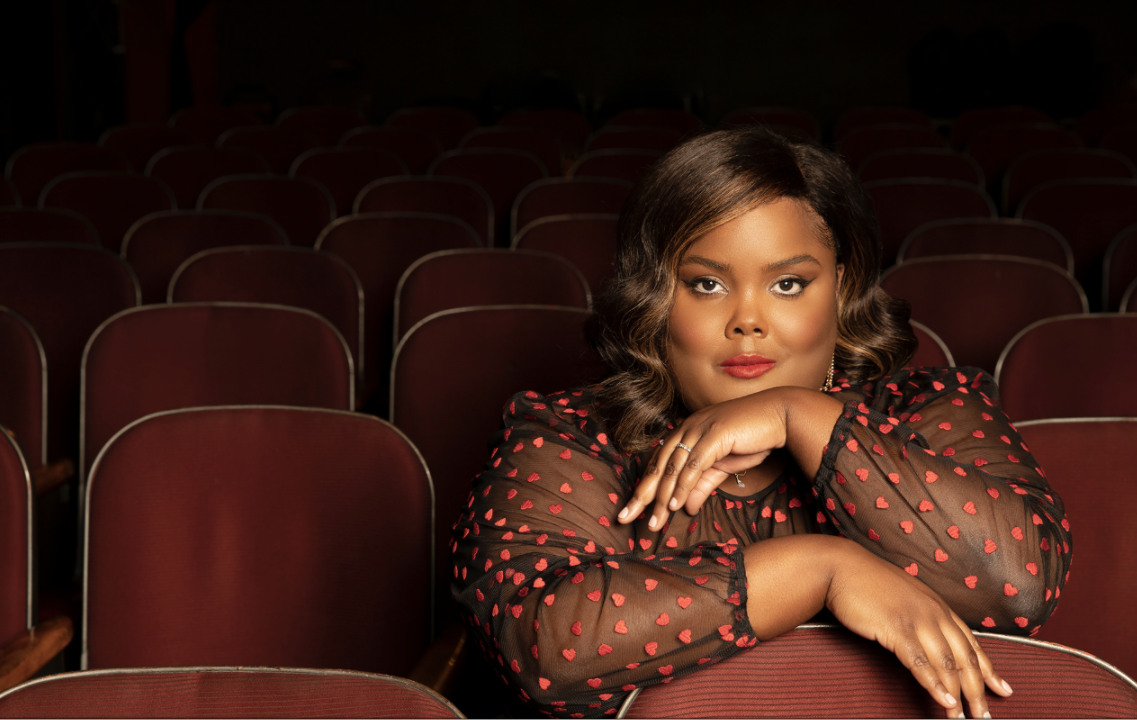 Danielle Pinnock is a whirlwind, and she’s taking Hollywood by storm, as an actor as well as by creating her own content. Her roles range from a lively spirit in CBS’s upcoming comedy series Ghosts to the voice of a character in her animated series about underwear.

BGN interviewed Pinnock via telephone about who she is, her upcoming shows, and creating her own opportunities as a Black plus-size woman.

Who is Danielle Pinnock? What do you want fans to know about you?

I think the biggest thing that I would want people to know about me, which I think is probably the most important and the most special, is that I’m first-generation Jamaican American. Both my mom and dad immigrated here from Jamaica in the 1980s, and their struggle has really inspired my career and made me want to work even harder to provide for them. Beyond career, beyond anything, I really want to make them proud because they’ve had so many trials and tribulations. When they came to this country, they hoped and prayed that I would have a better life, and I hope that I’m making them proud.

Tell us about Ghosts as well as your character on the show.

Ghosts is a riot. The show is about a new couple, Samantha and Jay, who inherit this incredible mansion only to find out that the house is inhabited by its previous owners who are a bunch of ghosts. They’re not spooky ghosts. They’re regular people, all from different eras. I play Alberta, a 1920s Prohibition Era ghost, and she is truly a hot mess with a heart of gold. She always wants people to hear her sing. She thinks she’s the best thing in the world. Everybody thinks that she has died of a heart attack, but she’s like, “There’s no way I died of a busted ticker. I have to have been murdered because my life was full of fabulousness and drama, and murder was the way to go for me.”

Honestly, every day I go to work, I feel like I’m in the comedic Olympics because we have some of the best actors in my opinion. Brandon Scott Jones, who’s playing Isaac, the Revolutionary War ghost, is really hilarious. Sheila Carrasco, who plays the hippie ghost, is so funny, and we have so many others as well. I’m so grateful that I am in the show. I am the only Black person in the show. I’m also the only plus-size woman that’s in the show. But we do have a ton of diversity. Our lead, Utkarsh Ambudkar, is a first-generation South Asian actor. We also have Ramon Zaragoza, who is a native actor playing an Indigenous character, the Native American ghost, and he is just so lovely and brilliant. I feel like this cast has so much diversity for broadcast TV. It’s going to make some waves.

What can you tell us about your upcoming show Unmentionables?

What I can share right now, which is really exciting, is that Taraji P. Henson and Anthony Hemingway are executive producers on the project. It is co-created by myself and my incredible artist homegirl friend, Punam Patel. The thing that I think is the most fascinating about the show is that Punam and I had never met in real life. I was watching her show Special on Netflix, and I was like, “Oh my god, another plus-size woman in the industry.” We actually met for the first time last year. Before the pandemic started, we began circling each other in the industry, online, and our friendship really did start on Twitter. We wanted to collaborate, and one day we said, “Why don’t we create something together?” And this is how Unmentionables was born in the summer of 2020.

It is a series that is about the misadventures of a millennial and her underwear drawer. It is a very adult animated series. We have phenomenal characters in the show. We have the granny panty, the matriarch of the drawer. She’s got a couple holes in her; she smokes her Newports. We have the thong. She’s like the sex kitten of the drawer. There are so many hilarious characters. Right now we are looking for a network home for it, so we’re keeping our fingers crossed. Somebody will want it. It is such a joy to have Taraji P. Henson and Anthony Hemingway on board. Taraji has been on my vision board forever. I think she’s an iconic actor, and so dynamic. We’re so grateful that they wanted to be a part of this and that they chose us.

What has been your experience being a plus-size Black woman in this industry?

I would definitely say as a Black woman in the industry, I had to create a lot of my own opportunities. When I graduated, I started to realize that a lot of the auditions that I was going out for were “sassy nurse” or “disgruntled truck driver.” I think that’s how the industry does Black women who happen to be curvy or plus size. We’re either the angry Black women or the mom who takes care of everybody on the block. So, I admire women like Octavia Spencer, Queen Latifah, Gabourey Sidibe, Da’Vine Joy Randolph, Danielle Brooks, and all of these incredible Black actresses who are curvy and plus size. Every character that they take has such a deep, internal emotional life to them. They are never two-dimensional, and that’s what I aspire to do with all of my roles.

So I’ve had to create my own work. The thing that I’m most proud about is my one-woman show called Body Courage. I decided to go out and interview a bunch of people worldwide. I interviewed 300 people about how they felt about their bodies. These people ranged from an Olympian in Mumbai, India, to a little girl on the South Side Chicago who was getting bullied for her weight and decided she was gonna fight everybody.

That show was the catalyst for my career, and it then led to Hashtag Booked, which I run with my best friend, Lanisa Frederick. We have a great following. We’re actually developing that into a pilot right now, so fingers crossed.

In addition to Ghosts and the other projects I’ve mentioned, I have three other projects in development that I was able to sell during the pandemic. I’m excited for those announcements to come out and to start getting to work. I cannot wait to continue with this legacy that I’ve been creating for so long. I’ve been in this industry for 17 years, so to be a part of Ghosts and to have my own writing projects take off as well — it is everything that I’ve been dreaming and hoping about. Stay tuned in to the show and everything that I got going on!