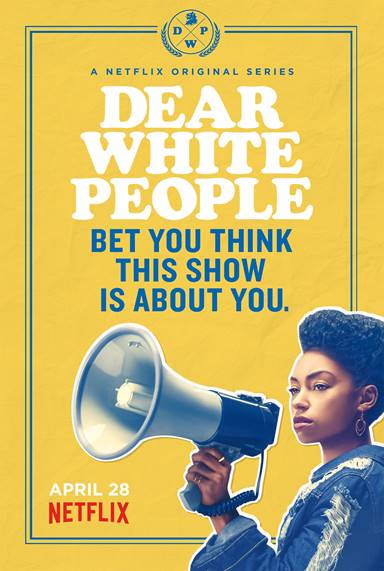 Simien wrote, directed, and produced the “Dear White People” movie, which premiered at the 2014 Sundance Film Festival that January before being theatrically released in October. “Dear White People” explores collegiate life as a Black person at a predominantly White university. The film centers on Samantha “Sam” White (played by Tessa Thompson), a bi-racial media arts major whose radio show causes a rift for addressing the very real racial tensions on campus. Beyond the everyday microaggressions that Black students at the fictional Winchester University face, there’s then a Blackface party hosted by one of the school’s fraternities.

At its Sundance premiere, Simien won the U.S. Dramatic Special Jury Award for Breakthrough Talent. While the movie earned critical acclaim and still sits at an impressive 91 percent Rotten Tomatoes rating, Simien knew he wanted to push the envelope even further.

He gathered feedback from people who’d seen the movie, and used it to inform his writing of the show, Simien told an audience attending a screening at The Gathering Spot, in Atlanta.

“Dear White People” the series picks up with the Blackface party and explores the reactions and fallout. Each episode of the show focuses on a different student, which allows Simien to dive deeper into the richness of their lives and the separate issues with which they’re grappling.

“Chapter I” centers on Sam, played by Logan Browning. She is still running her radio show, titled “Dear White People,” and dealing with the aftermath of the nonschool-sanctioned Blackface party. In addition to dealing with the subtly and not-so-subtly racist radio callers, she contends with the campus bureaucracy and different types of student leadership styles that come along with trying to implement lasting change. During this episode, there’s a big reveal that’ll have you dying laughing and an epic rant that’ll leave you in tears.

“Chapter II” focuses on Lionel Higgins, played by DeRon Horton. In the movie, Lionel is the quiet reporter who is one of Sam’s trusted allies on campus. In this episode, we get to see him as so much more! He’s exploring his sexuality and really coming into his own in terms of figuring out who he is and what he believes. A particularly hilarious line from this episode was when Silvio (Lionel’s editor) says “Labels keep people in Florida from drinking Windex. Find your label.”

In this series, you’ll find humor, heart, and much-needed explorations of the issues that Black students face when attending predominantly White institutions.

Brandon Bell and Marque Richardson reprise their roles as Troy Fairbanks and Reggie, respectively. Check out our Conversation with the Cast and Crew of Dear White People, as well as our SXSW coverage, as you anxiously await the show’s arrival!