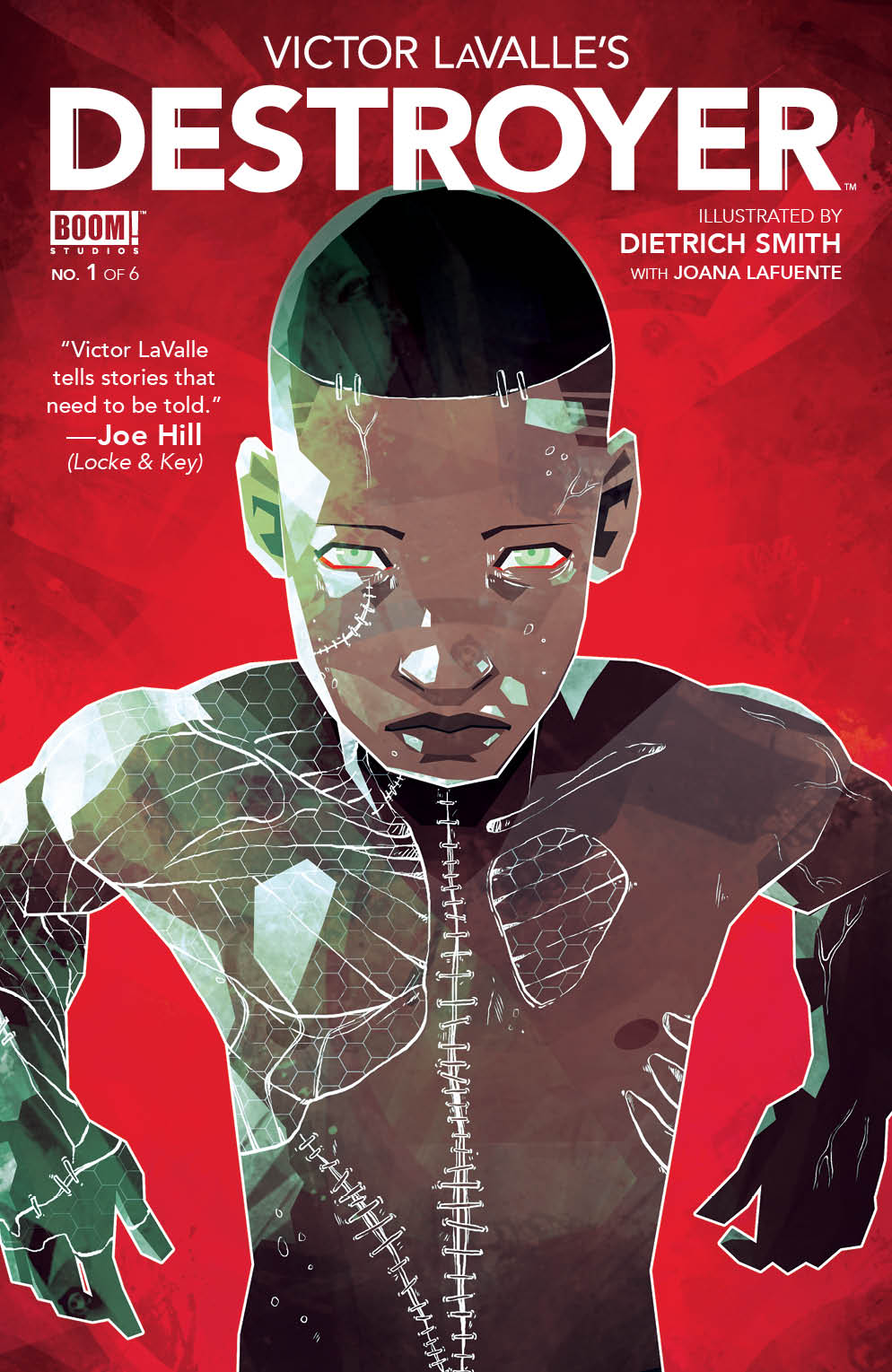 Most people’s recollections of Mary Shelley’s Frankenstein, are very literal. There is a doctor, with questionable ethics, who reanimates dead human parts to create a monster. The doctor rejects the monster, who finds a way to educate itself and pay the doctor back for abandoning what he has created. The monster survives and makes it home in the Arctic to avoid the constant persecution by the world at large. This is where Victor Lavalle’s Destroyer begins. The monster sits alone, minding its business, just communing with nature when a flagrant crime against nature occurs right before its eyes. 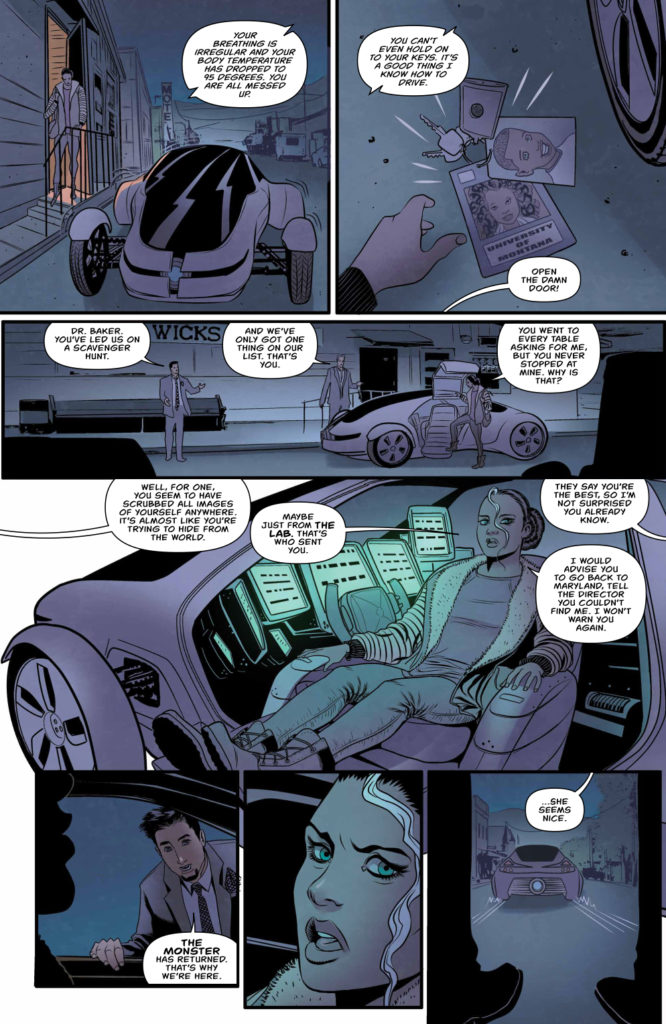 So I’ll be honest, I don’t normally read vampire, werewolf, zombie, or other monster books because some of them are just plausible enough to give me nightmares; and with the advances in modern medicine, the imaginations of an eighteen-year-old Mary Shelley may become reality. What we in the black community fear is not zombies or other monsters, but the real monster of racism,  exemplified by the incessant trickle of murders of unarmed black men at the hands of law enforcement. In Destroyer, a descendant of Dr. Frankenstein expresses her grief by the reanimation of her slain son’s reconstructed form. Dr. Baker and her once-dead son must endure the repercussions. 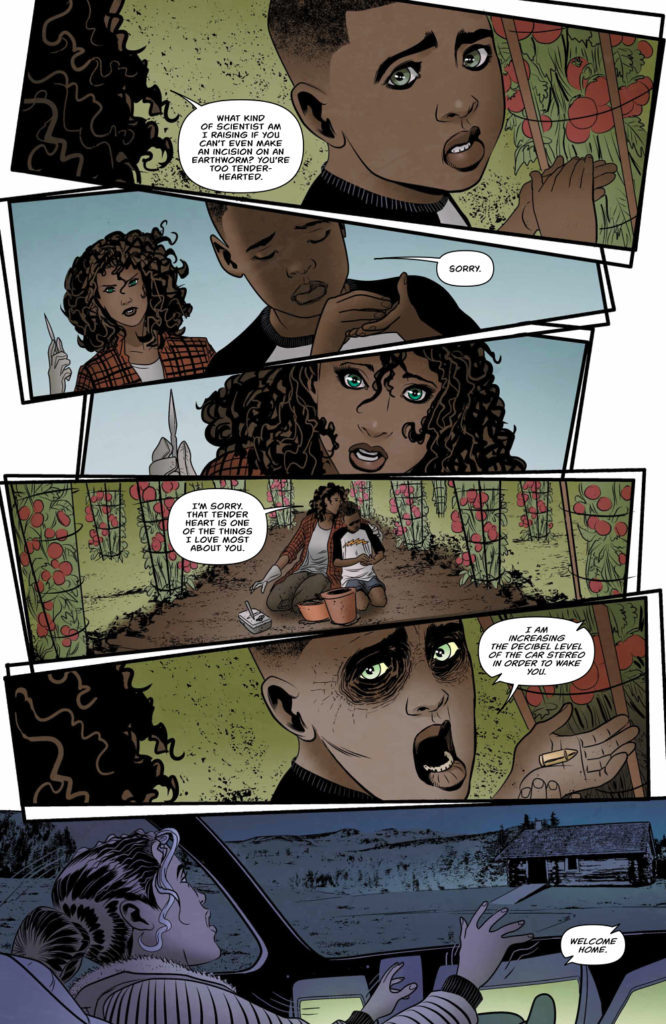 Dietrich Smith and Joana Lafuente work great with Lavalle. There is a balance between the art, the colors, and the writing that allows for seamless storytelling. This should be no surprise as outside the realm of comics, Lavalle is an acclaimed author of several novels including, The Ballad of Black Tom, winner of the 2016 This is Horror Award for Novella of the Year, a master of monster stories you could say. BGN caught up with Lavelle so he could speak for himself.

BGN: I saw somewhere that in your youth, you were a fan of HP Lovecraft, Shirley Jackson, Clive Barker, and Stephen King.  Were you into comic books at all, and if so which ones?

For sure. My love of comics predates even my love of those authors. Comic books were my entryway into literacy and the love of reading. My list of favorites from back in the day would have to include the old Detective Comics during one of Batman’s heydays, the X-Men, early Teen Titans, Sandman and Swamp Thing, Daredevil, the Legion of Super-Heroes. So many more, the list could go on for pages.

BGN: Are you still reading comics, if so which one(s)?

I spent a decade or so out of the comic game but I’ve come back into it pretty strong. Some of the stuff I regularly read now: Paper Girls, Concrete Park, Saga, Agents of the Realm (webcomic), Sex Criminals, Black Panther, Manifest Destiny, Niobe, Ms. Marvel, Hulk & Totally Awesome Hulk. There’s much more, too. It’s a great time for comics.

BGN: I believe you have indicated that you hadn’t read Frankenstein until you were an adult.  Was it the idea for this story that got you to read Mary Shelley or something else?

I did only read the novel as an adult. I think, maybe in high school, it was assigned but I didn’t get very far. I read it as an adult because my wife taught in a literature class. She’s a writer as well and she was teaching a course called The Literature of Birth. She had a lot of stories and books in the syllabus that many people might not think of immediately. Octavia Butler’s “Bloodchild,” for instance. Frankenstein was another one. While there’s no actual birth scene in the novel the whole thing is, absolutely, in part about birth, gestation, life giving. She talked about using the book for class and told me I had to finally read it. I did. And now, as an adult, it blew my mind. It didn’t inspire the comic right away, but after about nine months the idea finally came to me, fully formed. 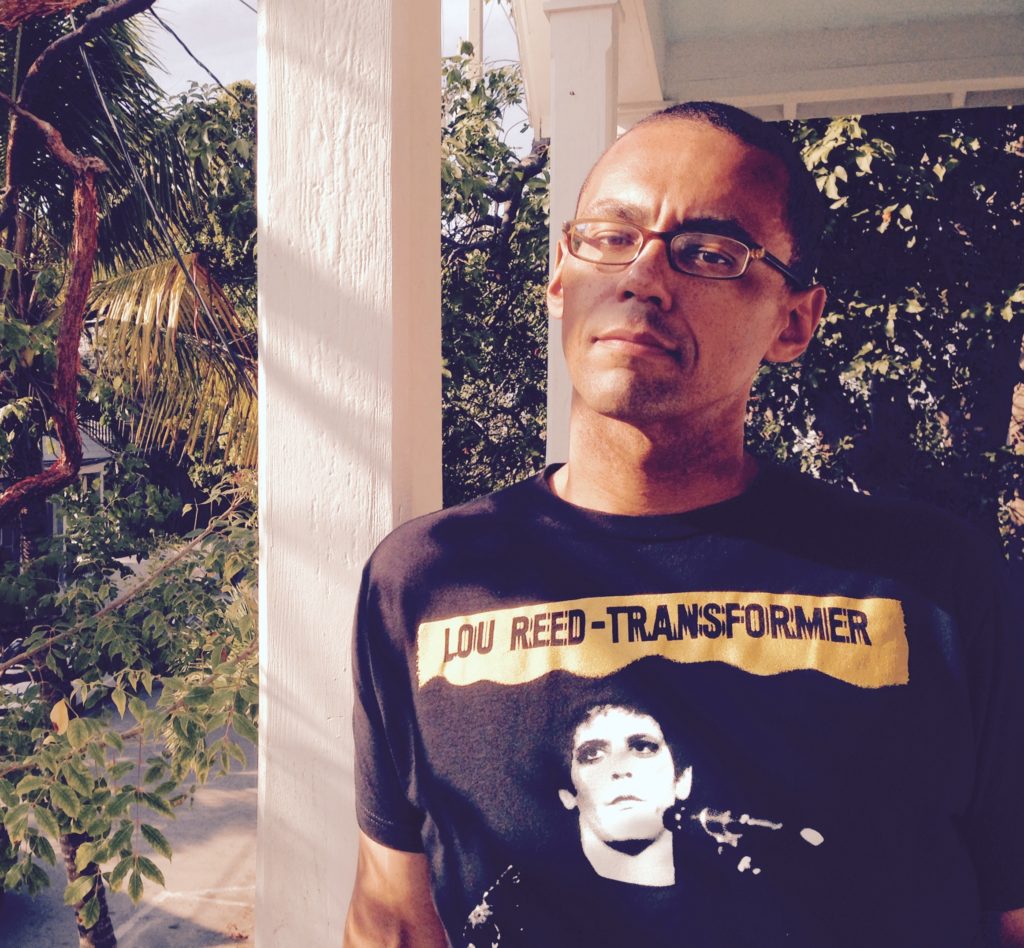 BGN: What was your process for developing this story, and did you find it different than your other writing?

This was the first time I had an idea that I knew had to be a comic book. I mostly write fiction–novels, short stories, and novellas–but even as I was dreaming this one up I knew those forms wouldn’t quite do it. I needed to be able to tell a lot of this story visually rather than relying only on my dialogue and prose. Plus, I’m a lifelong comic book reader so I’ve been dying to leap into the form since about the age of twelve. Only took me another three decades or so to get there.

BGN: As I understand it, you famously started with short stories and moved into the novella. So, what was it about this story that was better suited to a comic book?

This goes back to the visual storytelling again. There was just so much I wanted to throw into the story–Frankenstein’s monster, an android boy, wildly futuristic technology–stuff that I thought would have the greatest impact if a reader could actually see what was there. That’s what so great about comics, if you can dream it up–and if you find yourself working with a genuinely brilliant artist–it can be done. And unlike a movie or television show, it won’t cost 100 million dollars to do it.

I think of “urban misery porn” as stories about black life that focus solely on hardship and misery. Tales that act as if black people never laugh or act silly, show affection or even just sit around a read a book for fun. In my comic, Dr. Baker’s life is struck by a terrible tragedy–the Chicago police murder her son–but she’s also a brilliant scientist on par with Tony Stark or T’Challa, Amadeus Cho or Riri Williams. She can be funny and loving, arrogant and a real pain in the ass. All of it, depending on the situation and her mood. Showing all these aspects of her, and her life, are the way to avoid falling into the trap of telling the same old story about black misery.

BGN: How much of your own life story/struggle is represented in the Bakers?

I’m a newish parent, my wife and I have two kids under six. I couldn’t have written this story without that experience. The depth of love and loyalty being a parent creates helped to fuel the limitless rage at the idea of having a child stolen because of casual fear and prejudice. That part is snatched straight from the heart.

BGN: There are some violent scenes in the first issue, so the question is who do you see as the audience for Destroyer?

There’s some serious violence but I hope it isn’t gratuitous. Graphic, yes, but it should always be grounded in the moment. Even if it’s rough I hope the reader will understand why it had to be rough. With that in mind, I’d say the book is for people who can roll with a healthy mix of violence and heady ideas and heartbreak and hope.

Yes. Dr. Baker has a point when she explains in clear detail how she is the last living descendant of the Frankenstein bloodline. If you know the novel, the monster (or Creation, as it’s called in the book) kills every member of Victor Frankenstein’s family except one. His brother, Edward, survives. That bloodline will lead to Dr. Baker in the 21st century.

BGN:  It seems that your stories have always had some kind of monster, in one form or another. Typically a monster is something to be defeated or overcome.  How many “monsters” have you included in Destroyer, and what/who needs to be overcome?

One Latin definition for monster is “a message from the divine.” I like this one most of all because it suggests monsters have a purpose that might have greater meaning. A monster must be defeated but it’s also meant to teach us something. That’s the way I’ve approached writing all the monsters that will show up in the series. Dr. Baker will be tested by them, changed by them, and hopefully made wiser.

BGN: Will we be seeing you at any conventions promoting Destroyer?

I’m still working out possibilities. I certainly hope to be showing up here and there.

BGN:  There seems to be a musical element to some of your stories if you had to make up a one hour soundtrack for Destroyer, what would be on the playlist?

Destroyer can be found wherever Boom Comics are sold.