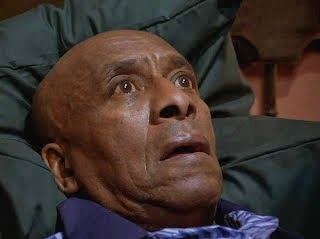 As a fan of both the book and film version of The Shining, there are a few differences between the two.

Besides Kubrick’s more subdued characterization and focus on the psychological horror of the The Shining, the filmmaker also rewrote certain plot elements regarding the hotel’s chef, Dick Hallorann (Scatman Crothers), specifically during the last thirty minutes of the film. A vital character in the book, Dick shared a supernatural gift with Danny that only they can understand, which was more fleshed out in the book. Plus, Dick was the victor in Stephen King’s original version (in which Wendy was nearly tortured to death). But regardless of what you think of Kubrick’s alternate ending (which I still love), it was nice to see Kubrick keep Dick’s compassion in the film.

Despite King’s more detailed portrayal of Dick, who’s one of four point of views in the book (the others being Wendy, Jack and Danny), there is a distance to his approach to the character. Much of his analysis, aside from what we learn about his fears regarding his “gift” and new surroundings in Florida, is vapid commentary on his race. King frequently uses his race as a means to describe how unfortunate he is, the doom he fears facing on account of it.

It’s even more random because, though Dick wasn’t in the best economical position, he had a job, a home, and was generally respected among his peers. That makes King’s reflection, the unnecessary pity, that much more peculiar to read, especially since the perspective he gives to the other characters is more genuine, like it’s actually coming from each of them. With Dick, it’s inaccessible, like it’s more what King thinks of him rather than what the character thinks of himself. While each character is written in third person, Dick seems less familiar than the other three vital characters.

Black Bookstores after the 2020 Book Boom on Racism