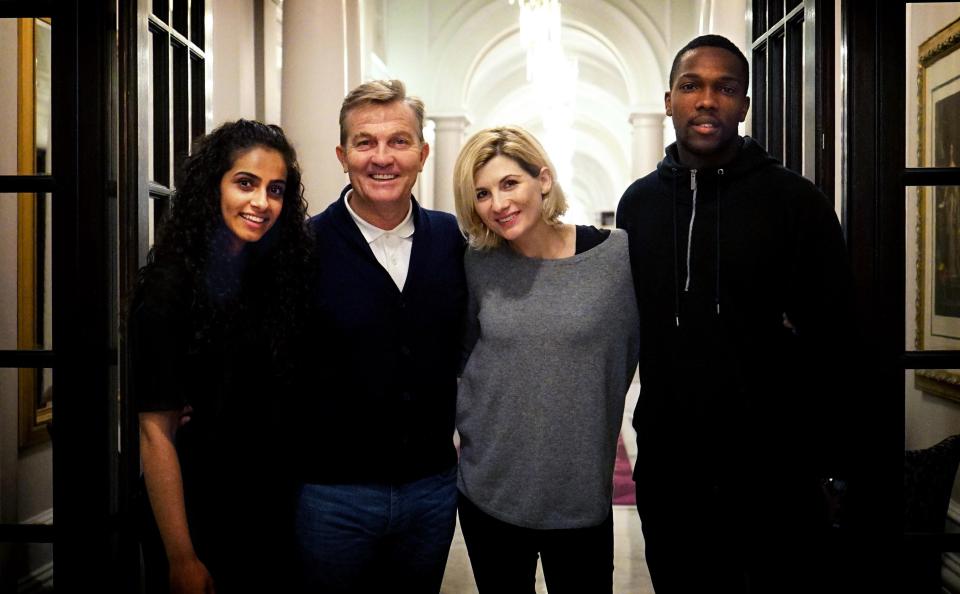 Earlier this summer, Jodie Whittaker was revealed as the Doctor during the men’s final at Wimbledon. Whittaker will be the first woman to play the Doctor. When asked how she felt about this taking on this seminal role, she said: “It was incredibly emotional because my entire life, as a child, all I ever wanted to be was be an actor, and I wanted to do it because I wanted to play pretend, and that is the ultimate. I’m about to play an alien, a time lord. And that as a girl? Who knew? That’s incredible and really emotional because of that.”

Whittaker will take over for Peter Capaldi after he regenerates in the Doctor Who Christmas Special, becoming the 13th Doctor. Not only are we getting a new Doctor, we’re also getting a new showrunner and companions as Steven Moffat and Pearl Mackie are also departing after the Christmas special. Moffat will be replaced by Chris Chibnall.

Yesterday the new companions were announced. Mandip Gill, Bradley Walsh and Tosin Cole will be playing Yasmin, Graham and Ryan. Gill is best known for her role in Hollyoaks. When asked about how she felt getting the role she said: “I am over the moon to be joining the Doctor Who family. This is an iconic show with an amazing fanbase and I look forward to everything that brings. Certain roles seem unattainable and this is one of those, so much so I didn’t believe it to be true for the first few weeks. To be working alongside the likes of Jodie, Bradley and my old friend Tosin is thrilling.”

Bradley Walsh is actor, game show host and comedian. He’s a long time fan of Doctor Who. He’s even a Doctor Who universe alum having played a villain in the Sarah Jane Adventures in 2008. He said that he was thrilled to be joining the show. Tosin Cole was also a star of Hollyoaks and was even in Star Wars: The Force Awakens as X-Wing pilot Lieutenant Bastian, a member of Poe Dameron’s Red Squadron. He expressed his gratitude and excitement over joining the show.

This new iteration of Doctor Who will return for a 10-week run in the fall of 2018.